ToolGuyd > Power Tools > Cordless > This is the CAT Ultra-Rugged and Waterproof Android Phone
If you buy something through our links, ToolGuyd might earn an affiliate commission. 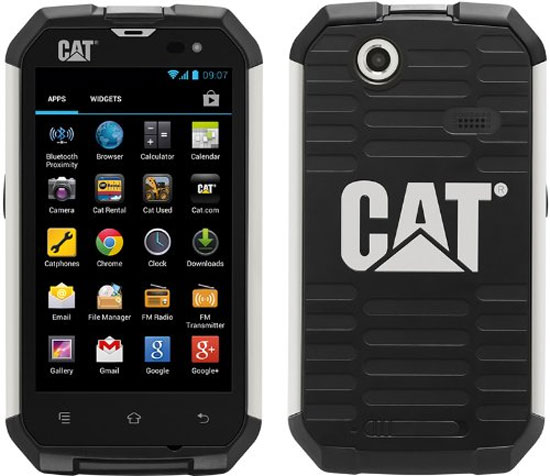 Caterpillar, the heavy construction equipment manufacturer more commonly known as CAT, has come out with a tough waterproof Android phone.

The CAT B15 smartphone looks like it could be a nice alternative to the Otterbox-clad iPhones and Android phones that have become popular at jobsites.

It features a rubber-cased aluminum body with few openings and the 4″ capacitive touch-screen display is covered by a scratch-proof Corning Gorilla Glass screen for optimal durability. CAT says that the new phone can endure drops onto concrete of up to 1.8 meters (5′ 11″) without suffering any damage.

An IP67 rating means the BR15 phone is very waterproof and dustproof. It is also shock resistant to military standards (810G) and can operate in a wide range of temperatures, from -4°F to 131°F.

As with other modern smartphones, you get WiFi and Bluetooth connectivity, GPS, an accelerometer, proximity sensor, and ambient light sensor, a headphone jack, and both front- and rear-facing cameras (5MP and VGA).

What’s disappointing is that, while the new phone can work on different networks, it can only support 3G and 2G network speeds. A 2000 mAh removable Lithium-ion battery pack provides up to 16 hours of talk time.

The GSM cellular tech means this phone will work on AT&T and T-Mobile networks in the US.

If I ran a construction business or worked for the city and needed to supply a crew with phones, I might consider CAT’s BR15. Its toughness and robust specs are pretty darned impressive. On the other hand, there are a lot of reasons why I would never buy one of these phones for myself, even if they were compatible with Verizon’s network.

First, what about support? An Amazon customer complained that warranty support for his broken phone was very complicated and frustrating to deal with.

Second, the comparatively low price tag for the unlocked CAT phone is indicative of the slower tech inside.

There’s no 4G radio, and CAT boasts that the phone has smart features such as Wi-Fi, GPS, 3G internet and access to the Google Play Store. My original Motorola Droid from 4-1/2 years ago had all these “smart” features.

So although CAT’s B15 phone looks very manly and can endure some attention-grabbing but rather unimpressive torture test stunts, think carefully before you buy one. There are plenty of reasonably tough smartphones out there, and there are lots of waterproof and toughening case options for popular models such as Apple iPhone and Samsung Galaxy series phones.