ToolGuyd > Hand Tools > Pliers > Channellock Linemen’s Pliers: High Leverage vs. Older Versions
If you buy something through our links, ToolGuyd might earn an affiliate commission. 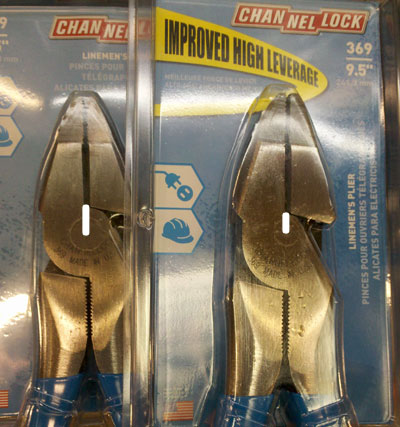 As we previously reported, Channellock has recently introduced an improved version of their #369 linemen’s pliers. We have one in-hand and wondered how it differed from Channellock’s previous design. Channellock says that they moved the rivet closer to the cutter to provide the additional leverage, but it also looks like the new rivet is a bit smaller as well.

Moving the rivet closer to the cutter does improve the tool’s leverage, but it is the overall change in distance between the fulcrum (corresponding to the center of the rivet) and the cutter that is ultimately what we need to look at. By shrinking the size of the rivet, Channellock further improved the mechanical advantage of the pliers by quite a bit!

To better visualize how the modification of rivet position and size influences the tool’s geometry, look at the change in length between the bottom of the rivet and the top of the “crushing” zone below it.