ToolGuyd > Hand Tools > Pliers > New Channellock SpeedGrip Adjustable Pliers are 100% Made in USA
If you buy something through our links, ToolGuyd might earn an affiliate commission. 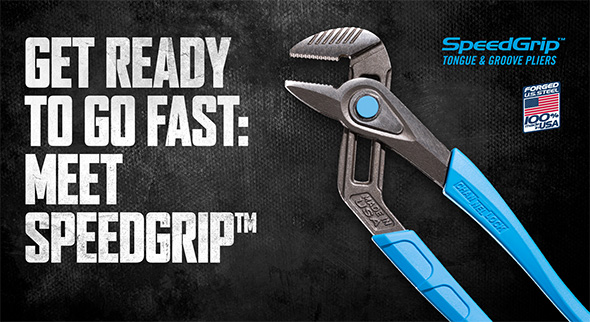 Channellock has been teasing about their new SpeedGrip tongue and groove pliers. This looks like it could be Channellock’s biggest new tools in quite some time, and are their first pliers to feature a push-button adjustment mechanism.

One appreciated detail is that the pliers are said to be forged from US steel and 100% made in the USA. There’s no fine print I could find, no asterisk, no “from global materials clause.”

Channellock’s teaser page has an email sign-up form, saying: be the first to hold the future in your hands. 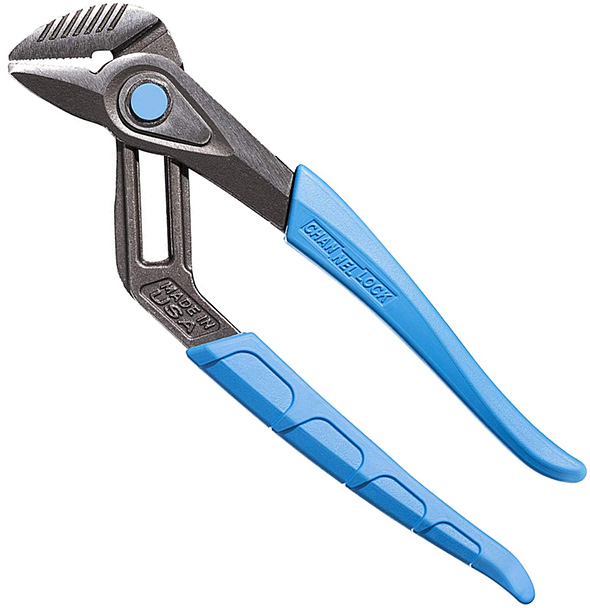 Channellock SpeedGrip tongue & groove pliers have a button adjustment mechanism, which Channellock says makes the pliers fast and easy to use, with non-slip adjustments.

We haven’t seen these pliers in person yet, and cannot comment about how or how fast the SpeedGrip pliers adjust. 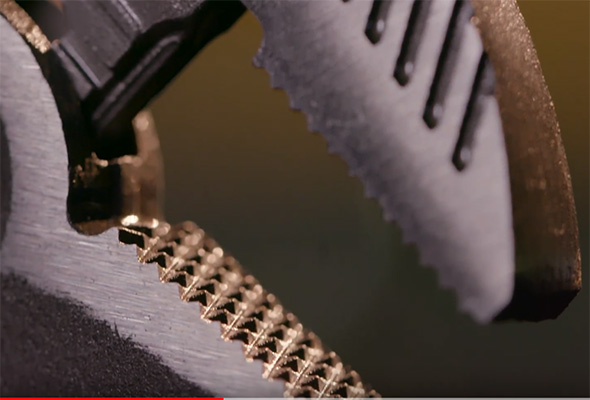 The Channellock SpeedGrip jaws feature cross-hatched teeth that are laser heat-treated for higher hardness and low wear. The jaws also have a pipe reaming feature. 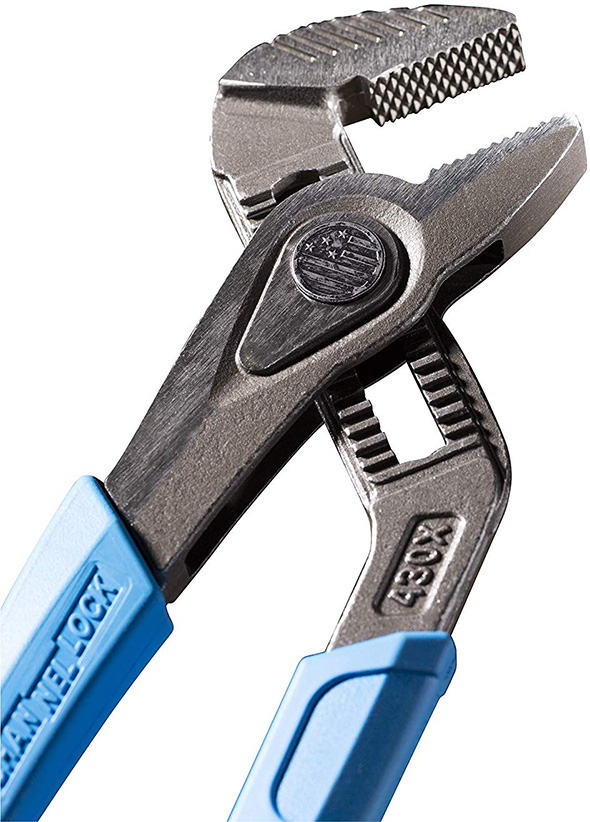 Additionally, Channellock has created a new three-dimensional handle grip that looks to be a cross between their dipped and comfort grip pliers handles. 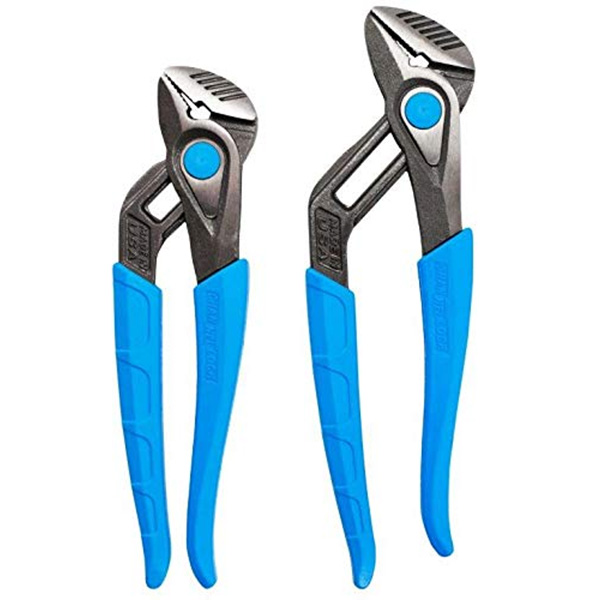 Several retailers have preorder product listings up so far.

Channellock’s 2019 product catalog (PDF) says that the SpeedGrip pliers will be available in 3 sizes:

To be thorough, let’s examine how they compare with other current options. 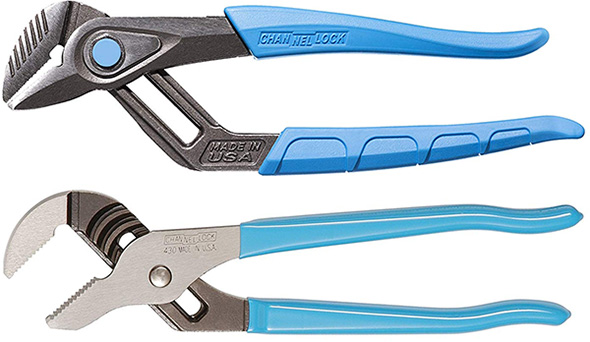 As of the time of this posting, the Channellock SpeedGrip pliers are only available for preorder. The 10-inch-sized pliers, 430X, are priced from $25 (in-store pickup) to ~$30.

The Channellock 430 tongue & groove pliers are currently $13 at Amazon.

Comparing the Channellock 430 and SpeedGrip 430X 10″ pliers, both have a maximum jaw capacity of 2″. The traditionally-styled tool has 7 adjustments, and the SpeedGrip pliers have 15.

The traditionally-styled pliers have grooved jaws, and the SpeedGrip a cross-hatched pattern with what look to be small pyramids that should deliver superior gripping power.

If the Channellock SpeedGrip pliers are as fast to adjust as other brands’ button-adjustable pliers, the new pliers will likely complement but not replace their existing tongue & groove-style pliers.

Channellock will also face competition from Knipex and other makers of high quality adjustable pliers. The Knipex Cobra is currently priced at $27 via Amazon, and a 2pc set with 7″ and 10″ pliers is ~$57 after “clippable coupon.” The comparison isn’t apples-to-apples due to the different jaw design, but it seems clear that Channellock’s SpeedGrip adjustable pliers are competitively priced for the market. 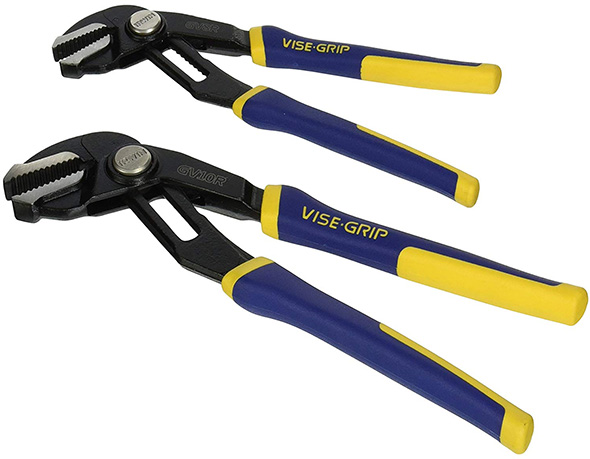 Irwin GrooveLock adjustable pliers will also pose some competition. This 2pc set, with 8″ and 10″ sizes, is currently just $17 at Amazon. Channellock’s GS-1X set of 8″ and 10″ SpeedGrip pliers is as low as $45 at DoitBest stores, and $58 at Amazon. However, it is important to consider that the Irwin pliers are imported, while the Channellock are 100% made in the USA.

We have often considered Irwin GrooveLock pliers to be “basic,” with brands such as NWS and Knipex to offer an upgraded experience. Channellock’s SpeedGrip pliers, if they compare well to higher-tier brands’ performance, will likely be considered in a similar light.

Why hasn’t Channellock made button-adjustable pliers before? Well, are there any other brands that make this style of pliers in the USA? I think it’s exciting that Channellock has finally come out with button-adjustable pliers. There’s definitely something appealing about the new design, handle grip, and 100% made in USA nature of the new tools. It’ll be interesting to see how well they work, and also how they adjust.

Channellock has not provided any hints as to what they have planned for the SpeedGrip pliers line. Will there be v-groove pliers? Smooth-jawed? Additional sizes? Time will tell.