ToolGuyd > Hand Tools > EDC, Pocket, & Multitools > Clauss Painter’s Tools, from 5-in-1 to 14-in-1
If you buy something through our links, ToolGuyd might earn an affiliate commission. 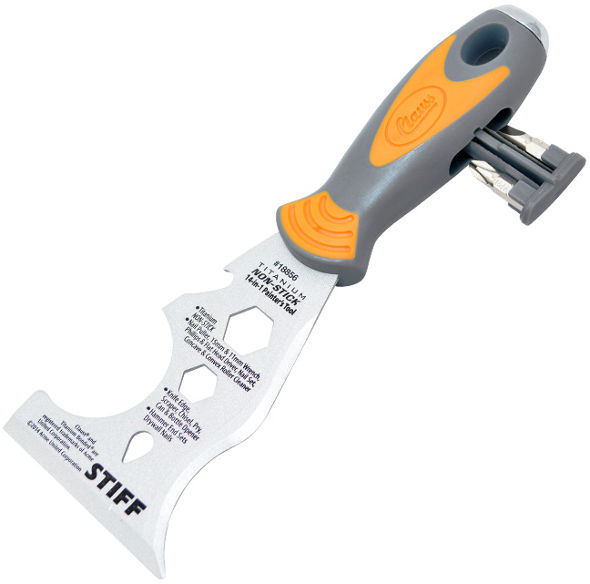 It seems that companies that make 5-in-1 painter’s tools are currently engaged in a cold war of escalation. The last time I looked, I found one with 10 different tools integrated into it, and I thought that was stretching credibility to its bounds.

To my surprise, I recently found a Painter’s tool that claimed it could be used as 14 different tools. Do all of the different “tools” actually serve different useful functions, or is this just marketing?

To break down the evolution of X-in-1 painter’s tools, I choose Clauss tools. For one, they have several tools, each with more functions than the last. Second, they all are very similar, so you’ll be able to easily spot the places tools have been added. Of course each tool might not actually be the predecessor of the next, but the premise still works anyway.

Let’s start off with all the potential uses of an unmodified 5-in-1 painter’s tool has. The blade can be used to scrape paint (1), and it can spread putty and joint compound (2). The half round cutout is used for cleaning paint rollers (3). The sharp point is used for opening up cracks, to make it easier to get patching compound into them (4). Finally, the blunt end opens paint cans (5).

Add a rounded, hardened cap on the end for beating paint can lids back on, or driving drywall nails back into place (6), and you get Clauss’ 6-in-1 painter’s tool. I believe somebody over at Clauss must have missed the Sesame Street episode where they counted up to 7, because that teardrop shaped cutout is a nail puller (7).

To get to eight tools, Clauss adds a bottle opener (8) and some random semi-circular hole on the opposite side of the blade that I can’t figure a use for. Ideas?

Then we jump right up to fourteen tools. Right away you’ll notice the semi-circular hole is gone, but they’ve added 11mm (9) and 15mm (10) box wrenches. Also opposite the first roller cleaner, there is now a second concave roller cleaner (11). They say there is a convex roller cleaner, but I can’t figure that one out. I think they mean the second concave one. Maybe it’s that bump between the straight section and the shallower paint roll cleaner. 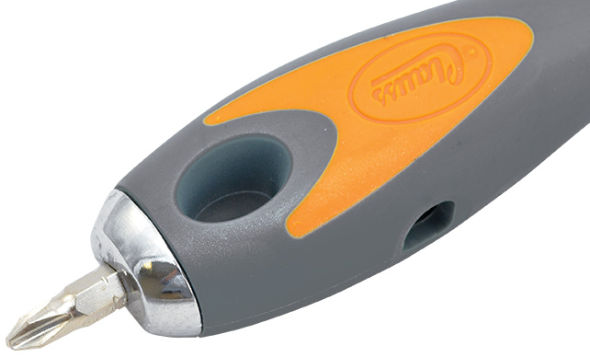 Lastly, when you pull out the compartment on the side of the tool, you’ll find a Phillips insert bit (12) and a flat head bit (13). The end cap, which already doubles as a striking tool, has a hex recess that these bits fit into so you can use the tool as a driver handle. They don’t show it on their website, but I presume that the bit carrier either is, or carries, the nailset (14), based on the way other manufacturer’s designs work.

It they really wanted to go for 15 tools, they could have claimed the hex recess in the hammer could be used as a 1/4″ nut driver.

All of these painter’s tools have a non-stick Titanium coating over the blade and an overmolded plastic handle for comfort and control.

This 14-in-1 tool has more functions than my first Swiss Army knife, and frankly they probably perform their function better that the tools on that old knife too.