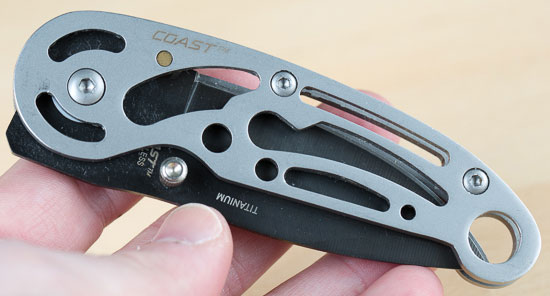 About a year and a half ago I bought this Coast C07 Skeleton folding knife via Amazon. It is my least-favorite folding knife, ever.

I have always been fond of this type of lightweight carved-out handle design, starting with the Gerber Paraframe knife I purchased years ago. The Skeleton had a sub-$20 price tag, which always makes me cautious, but I decided to take the risk. 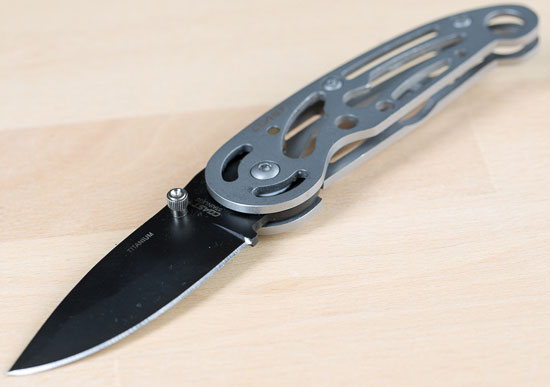 The 2-5/8″ blade is made from titanium coated stainless steel. First, that’s not titanium, it’s titanium nitride or a similar composite. Coast is not the only manufacturer to throw “titanium” around like that, but that doesn’t mean it’s right. It also peeves me that they don’t identify the steel they used for the blade anymore.

Our early 2011 preview post of the knife does describe the blade as being made from 440C steel. But in the nearly 2-years since then, Coast changed the product details to simply read “400 series.”

For the price, I can’t really complain. Right? 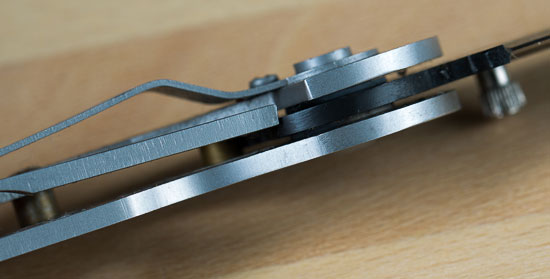 The handle components do have a nice brushed luster. Overall, I like the way the Skeleton knife looks.

I’m not too pleased about the shallow engagement of the frame lock, but that’s really the least of my complaints. If I want greater security, I can jam the frame lock further towards the opposite handle. My major complaint with the knife is that it’s impossible to open with one-hand.

Either it’s a design flaw or manufacturing defect, but the knife cannot be opened via the thumb stud. To open it, I need to hold the knife in my right hand and pull the blade out with my left hand. 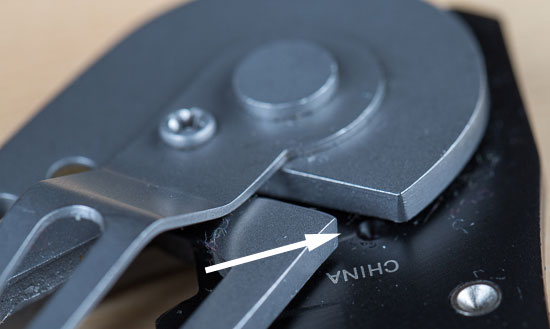 If you look closely you’ll see the divot part of the ball detent mechanism that engages when the knife is closed. The knife is not beyond repair or modification, but I’ve never had the desire to start playing around with it.

I put off this review for a long time, hoping I would someday find the silver lining. But ultimately, it’s just a bad knife with few redeeming qualities.

Design-wise, there are a number of compromises as well. The knife tip is exposed in the lanyard hole, where it could be damaged by a keyring or can cut through a paracord loop. This is a righty-only knife due to the placement of the thumb stud, not that it matters since you cannot deploy the knife via the thumb stud anyways.

When holding the knife, a sharp part of the handle above the frame lock (which you can see in the same photo as the ball detent divot) digs into my pointer finger. The other handle edges are not sharp, but they could stand to be knocked down a bit.

Overall, the knife is hard to open and uncomfortable to close. I don’t mind knives that open with two hands, but this model was designed for one-handed deployment.

Recommendation: If you want a skeletonized knife for less than $20, buy a Gerber Paraframe I instead ($18-21 via Amazon).

The knife featured in this review was purchased at its full retail price via Amazon.