ToolGuyd > Awesome & Cool > Coaster Werx “Opener Coaster” (or Small Parts Tray)
If you buy something through our links, ToolGuyd might earn an affiliate commission. 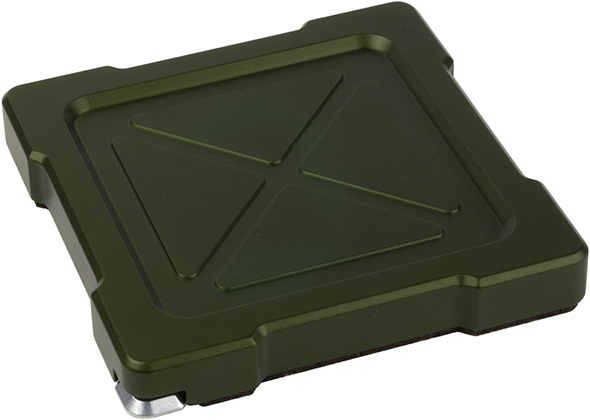 The folks at Bench Werx were unsuccessful at getting their PCB Rax circuit board support system funded in a Kickstarter campaign 2-years ago, but were still able to finish developing and manufacturing the product. We’ve been in contact with them about a test sample (I think the PCB Rax looks very useful and versatile).

They’ve got a new fundraising campaign going on, and also sent over a coaster, asking for feedback.

Yes, a coaster. You know – the thing that you place drinks on to protect a table surface from drips and condensation.

A coaster? What am I going to do with a coaster. Oh, it’s an Opener Coaster, with various drink-opening tools build into the base. 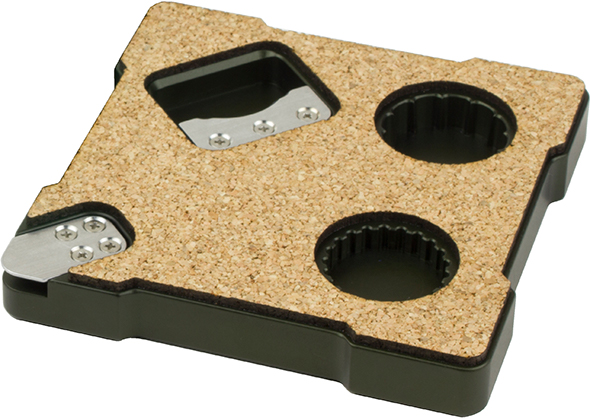 I’ve had trouble finding bottle openers in the past, but always made do. But I’ve seen others struggle to open bottles, even water and soda bottles. And some flip-tab cans can be particularly difficult to raise without breaking a nail or reaching for a key or screwdriver.

But I’m going to be honest here. When I opened up the box, I wasn’t thinking “ooh, I’m going to make great use of this coaster to open up bottles.”

The MK-1 looks like a nicely machined and anodized slab of aluminum. I couldn’t put my finger on the color – it’s a sort of dark green gunmetal.

Officially, the color of the sample they sent over is olive drab, but it’s darker, less green, and more metallic than I would associate with olive drab.

It also looks oversized for most drinks. But if that’s the case, they also make a “modern” styled coaster that’s a bit smaller. 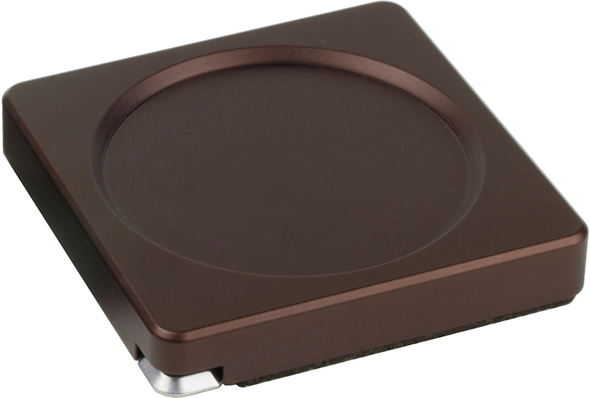 This is the “modern” version, featuring the same 4 bottle opening tools, and with a plainer-looking circular drink pad.

I’m going to keep this on my desk and use it as a parts tray. It’s a little shallow, but should be perfect for smaller sized fasteners I tend to work with at my desk.

I might even use it as a coaster – maybe for a mug of something hot, or a cold whatever.

There’s a cork liner on the bottom which looks and smells like it was laser cut. I might replace it with criss-cross textured neoprene (McMaster Carr, Lee Valley) to prevent it from sliding.

Well, maybe I’ll use the bottle opener implements, if they’re already right there.

Both are stonewashed before being anodized.

There are stretch goals, where they’ll increase the number of color options if higher funding levels are reached. Personally, I’d love to see these in bright blue.

I’m going to back the project, but which color. Gunmetal grey? Bright red?

Hmm, I just picked a scab and now it’s bleeding. I guess that’s a vote for bright red.

This is an “all or nothing” campaign. If they don’t reach the goal of $5,000 by then, everyone’s money is refunded. Since this is Kickstarter, you’re not buying a product, you’re investing in the product with an agreed-upon reward in mind. Some Kickstarter projects reach funding but don’t deliver on the rewards, so there’s a level of risk.

Seeing as how the Opener Coaster is a project by an established business, and that I have a prototype coaster in my hands, I am confident in backing the project with my own credit card. They have the means to produce these coasters, and are looking to raise money for more equipment and “optimized tooling.”

Should I order some for giveaway? *Crosses fingers, hopes for blue.*

The photos they provided don’t do it justice at all, and my smartphone pics aren’t any better – for some reason the green shows up as a lot more green.

It seems really silly for me to be find a coaster to be cool, but something about the design and feel just calls to me.