ToolGuyd > Hand Tools > Hammers & Mallets > Cole-Bar Hammer Multi-Tool Has Failed to Launch
If you buy something through our links, ToolGuyd might earn an affiliate commission. 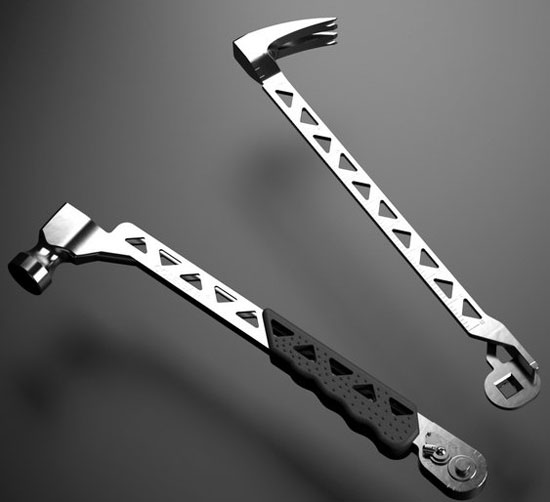 Last year, after they successfully met their Kickstarter funding goals, I posted about the Cole-Bar multi-functional hammer. It was part hammer, part nail puller, part socket wrench, and part square.

I was a little hesitant about the tool, but it was interesting enough to post about. I waited until after the hyped-up Kickstarter campaign, when they started offering pre-orders. The last I checked, their shipping ETA was moved from Q1 2014 to Q2 2015. We’re currently nearly a month into Q3.

Well… it looks like that shipping estimate might not be accurate. Their latest update on Kickstarter, which is hidden to the public so that only funding backers can read it, is headlined:

Update (3/30/2016): We have been informed that “The Cole-Bar is indeed moving forward with production slated for later this year with new American mfg. partners.” Check out the comments section below for the latest update!

At one point the pre-order price shot up from $79 to $139. And right now Cole-Bar’s website looks to be having problems with displaying images. It also hasn’t been updated to reflect their manufacturing hurdles.

While I would like to say I’m completely surprised, there’s a reason I posted about the tool concept only after its Kickstarter campaign was done and they started offering pre-orders on their website. Hopefully they followed common pre-order practices, which is to only charge a credit card once an order ships out, and didn’t charge anyone yet.

There are inherent risks when you choose to back a crowd-funded tool, product, or other campaign. There are fewer risks when you back campaigns started by established companies, but I’m not really a fan of those practices either.

If you pre-ordered the Cole-Bar, hopefully you’re not out any money. If a transaction was processed, you might still be able to dispute it. If you’re a Kickstarter backer, what else is said in that recent “we can’t make Cole-Bar hammers” update? And have you been able to get your pledge refunded?

Maybe the Cole-Bar team can somehow pull things together and get these hammers built, but it seems they’ve lost all optimism.