ToolGuyd > Storage & Organization > Comparing Milwaukee Packout and Dewalt Tough System Rolling Toolboxes
If you buy something through our links, ToolGuyd might earn an affiliate commission. 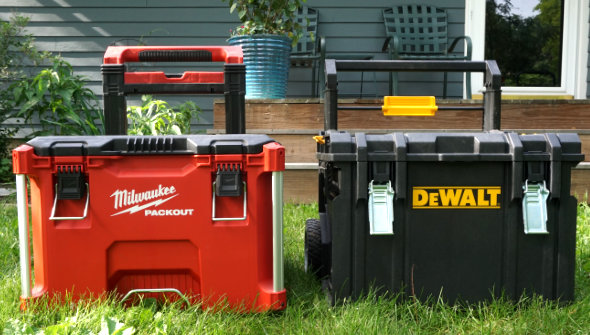 There are some things you don’t really notice about a product until you put it side by side with a competing product.

I’m packing for my yearly camping trip and am trying to decide which rolling toolbox to bring with me. Last year, I brought the Dewalt Tough Box rolling toolbox camping, and it worked out pretty well. I was thinking about trying out the Packout this year, but some things about it bothered me. So I brought the two rolling toolboxes together and several synapses started firing in my brain.

Trying to compare the volumes is tough; I can’t find any specs for the Packout internal volume and trying to calculate it would be a nightmare. The Tough System rolling toolbox volume is said to be 3927 cc. For the argument’s sake, let’s just assume that they are similar in volume.

Having a similar volume doesn’t mean that both boxes are equally usable. When you are trying to fill the boxes with tools and supplies, it is going to be easier to fill and arrange the tools with less wasted space in a rectangular box like the Tough System. 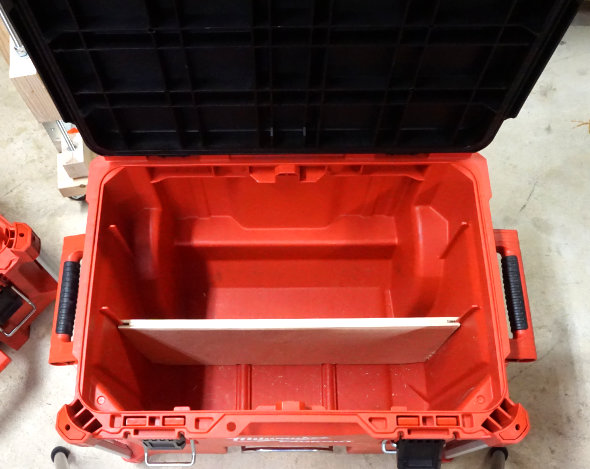 At first glance, neither box appears to support the use of dividers to partition the space, but with the clever use of the internal ribs, you can fashion some simple dividers out of plywood for either box.

The Packout only has two positions where you can put dividers, and they are not interchangeable, you’d have to make a separate divider for each location. 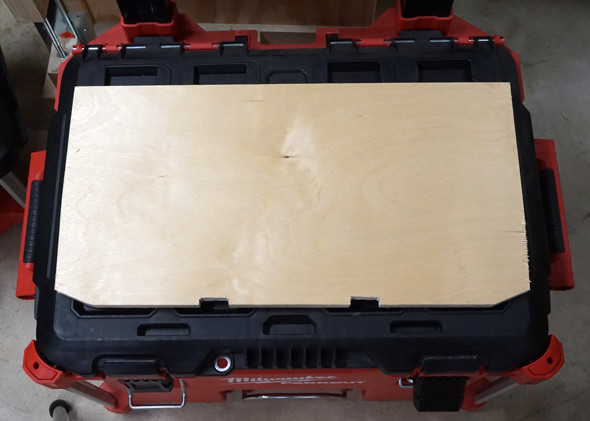 To make the dividers, I just cut some 1/2″ plywood cut to the correct size and then cut some grooves in the sides that ride over the internal ribs of the boxes. Due to the irregular dimensions on the inside, I also had to make cuts in the bottom of the divider to deal with the humps in the middle and the sloping edges. And, I had to make some angled cuts on the sides to account for the slope of the box. 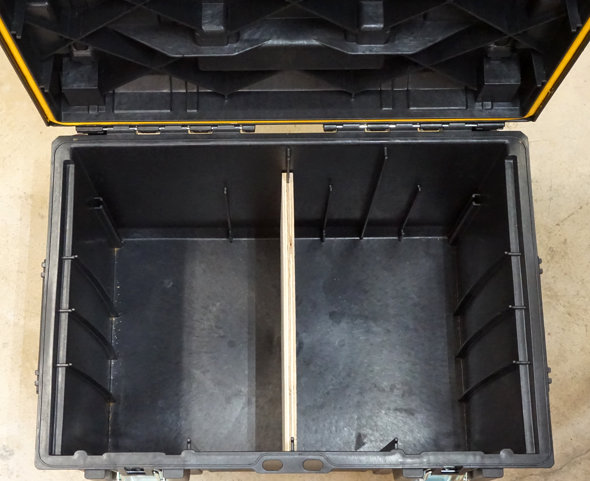 On the other hand, I found I had more options with the Tough System box. As an added bonus, the sides are pretty square and the bottom is flat. There are two positions for a short divider from front to back, and three positions for a long divider spanning side to side. I choose not to make a long divider.

In the end I decided to choose to take the Dewalt Tough System Rolling toolbox for camping again because it is easier to pack and gave me more storage options. Here’s how I have it packed so far: 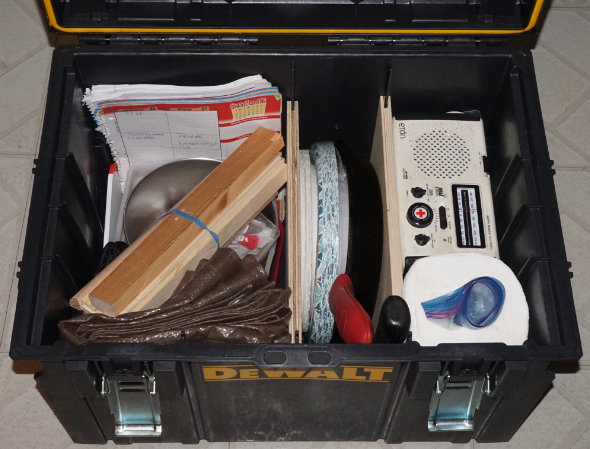 There are many other criteria that you can use to compare both of these rolling toolboxes and the Packout and Tough System product lines as a whole.

Price shouldn’t be the only reason you choose a product, but it can be a big factor when you are looking for mobile tool storage on a budget.

First off, the Dewalt Tough System rolling toolbox is cheaper than the Milwaukee Packout. You can pick it up right now for $70, or watch for it to go on special or clearance at a Home Depot for $40 or even less. In fact, you can get a three piece starter kit with a large toolbox and mobile tool box for about the same price as just the Packout Mobile cart alone, about $130, whereas the Packout 3 piece starter kit will cost you $250.

Note: Many Milwaukee Packout components are still hard to find (they sell out fast), so that might be another reason to choose the Dewalt Tough System. 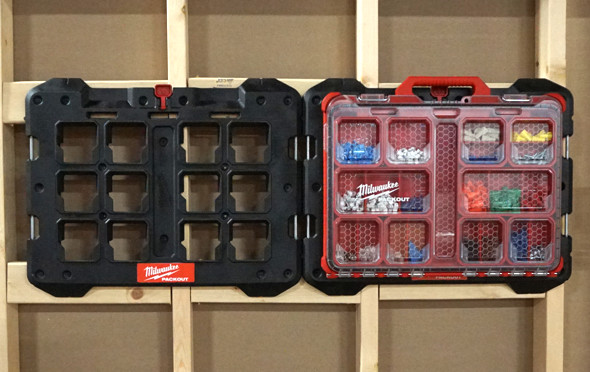 As I was playing with the two rolling toolboxes, I remembered the new Packout mounting plate that Milwaukee is introducing sometime after September 2018. 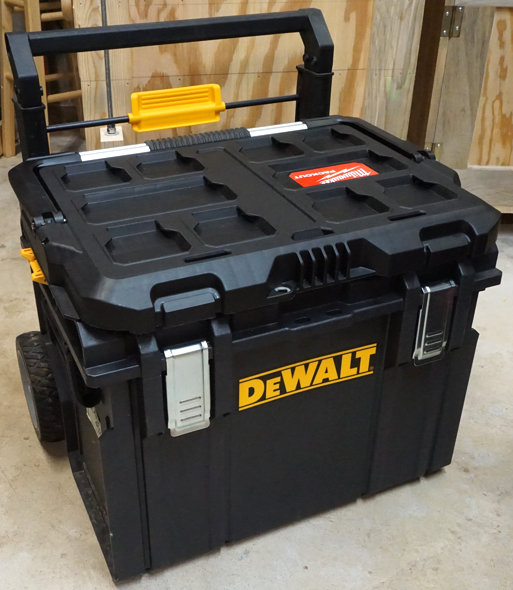 This made me wonder if it would be possible to adapt the Dewalt Tough System rolling toolbox to the Packout — they are relatively the same size. And for the cost of a bracket and some modifications you wouldn’t have to choose between systems.

I didn’t want to do any permanent damage to either system right now, but I was curious if it might work. So I took the lid off another Packout box and placed it on the Tough System rolling toolbox. It’s not too large and the the mounting plate looks to be even smaller, so it might be possible to make an adapter bracket with the new Packout mounting plate. Of course, this might work with other toolbox systems too. 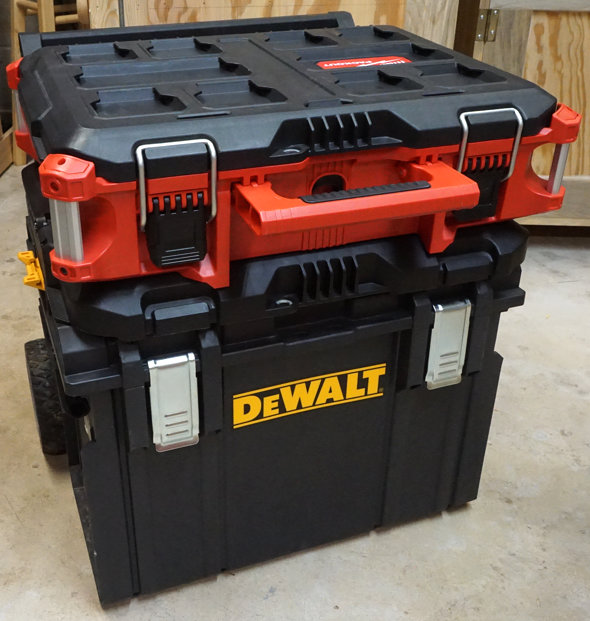 Once I get my hands on the mounting plate I’ll see if it’s possible, or maybe somebody else will come up with a better idea.

Thank you to Milwaukee for the test sample. The Dewalt unit was purchased at retail.