ToolGuyd > Power Tools > Saws > Reader Question: Comparison or Reviews of the New Jet Miter Saw?
If you buy something through our links, ToolGuyd might earn an affiliate commission. 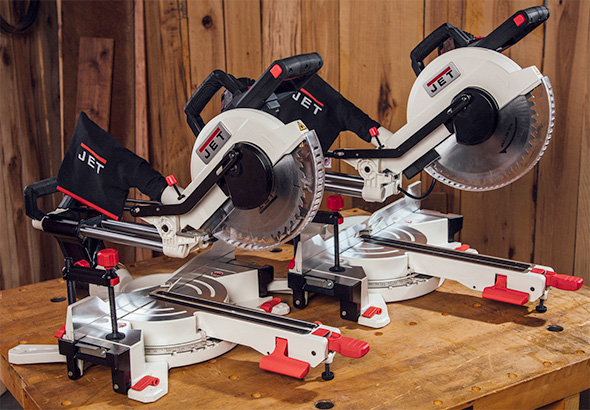 A reader wrote in with some insults and questions about the new Jet miter saw.

Do you actually review tools or just socks, pencils, and food storage containers? Seems to be a pretty lightweight “tool” site. Since I’m in the market for one, where is there an actual side-by-side review/comparison of sliding compound miter saws? E.g., I came here looking for at least a review of the Jet 10-in. but only found the intro marketing language.

Do any of you have experience with the new Jet miter saw that you’d like to share with Robert?

I wrote a news post about the new Jet 10″ and 12″ sliding miter saws back in October. Sorry, Robert, but I don’t have any plans to review it.

We requested Jet tool review samples a few years ago, but they declined, basically saying they didn’t see the point of it, and I haven’t given any thought to fresh efforts.

To put it candidly, while I have purchased some Jet woodworking tools, I personally wouldn’t consider their miter saws, at least not ahead of more favored competing models.

On paper, the new Jet miter saws do sound competitive. But I have my personal brand preferences, and Jet isn’t on that list.

Jet has a good track record when it comes to [certain] woodworking and metalworking equipment, but benchtop power tools? From what I’ve seen every time I’ve looked at the brand when researching personal purchases, they don’t have the greatest reputation. Jet’s new miter saws would need to be of much greater reader/audience appeal before I’d give them any more personal or editorial attention.

Professionally, speaking as a tool editor/reviewer, I’d be open-minded towards experiencing loaners of some of their newer benchtop power tools, but there are much more interesting and asked-about tools on my list.

Speaking personally as a tool user, Jet’s miter saws are in a very crowded price level. Why spend the same on a Jet miter saw when I could spend the same on premium miter saws from market-leading brands, or less on lower featured models like the Dewalt DWS779 ($350 via Amazon)? If you can answer that question, then go for it, but I can’t.

Different people have different needs and wants, and I’m sure that Jet’s miter saw features will appeal to certain users.

I have limited time and a limited budget. “Actual side by side comparisons of sliding miter saws?” I don’t like comparisons, as it can be very difficult to discuss any data, interpretations, or conclusions around apples vs. oranges differences.

Testing miter saws require big commitments in regard to time and workshop space. Comparing miter saws – sure, that’s something I could do, but I’d rather not. I’m working on testing a couple of different miter saws right now, but they’re of very different styles and sizes, and so a side-by-side comparison wouldn’t make much sense.

I wish I could accommodate all tool review requests, but quite frankly, I’m hoping for 2020 to be a slightly lighter year so that I can catch up on personal projects and backlogged reviews.

It would take me quite a bit of convincing to spend money on a Jet miter saw for personal use (or editorial review). There’s nothing wrong with these miter saws that I can tell, but the marketing materials I’ve seen don’t make enough of a convincing case to appeal to my miter saw preferences, at least not at their current pricing.

Because of my past difficulty in requesting test samples from Jet, I’m going to save my efforts, at least until there is something I feel much more strongly about testing. There are a couple of retailers who I could try to convince to loan me a unit, but I haven’t seen strong enough interest in either of the new Jet miter saws to warrant it.

There’s also the fact that as I’ve been sick with different colds during maybe 5 out of the past 7 weeks. Before that, I was winding down from the holiday shopping season.

Jet’s miter saws don’t seem to be very popular, as I haven’t seen many user reviews, and I don’t think I’ve seen any editorial reviews. But, that’s to be expected. Consider Delta’s Cruzer miter saw, which came out last year. It’s a non-traditional design and there are distinctions that might bump it up on certain users’ shortlists.

My post about Jet’s miter saws was somewhat shallow, or at least less insightful than I usually like, because there’s not much distinction to talk about. I found the news release interesting, and am actually hopeful that Jet launches or updates more benchtop tools. But what’s special about these new Jet saws? Cool, it has a separate cut-line laser and an LED worklight, although personally I prefer LED shadow cut-line indicators. The saws have a 2-1/2″ dust port adapter, but there’s no mention of dust collection efficiency, and I can’t see a rubber dust chute in product photos.

There simply wasn’t a lot to talk about in the news release. That’s not necessarily a bad thing, as there are no glaring “gotchas,” but there’s also not a lot to inspire a review. What do these Jet saws do differently than competing saws?

At best, they perform on-par with other 10″ and 12″ sliding miter saws and are either accurate out of the box or easy to just. At worst?

If there’s interest in a review, I might put it on my list of test samples to work on acquiring.

In the meantime, if any of you have used these new Jet saws, would you recommend them to Robert?

As for me, I’m going to work on my next series of pencil, socks, and food container reviews. And also, photography of some hand tools I’ve been using and sitting on (figuratively), a batch of Milwaukee M12 tools, and the new Packout tool box that just came in.

Also, please don’t get on Robert’s case for his somewhat jerky comment. It might come across as rude, but at least he dug deep enough into the site to take notice of some of the off-topic headlines.

Separately, I’m working on the next series of knife reviews. There have been as many “when will you review more pocket knives?!” requests in the past couple of months as “please, less knives!” complaints after the last high-frequency series.