ToolGuyd > Power Tools > Cordless > A Right Angle Driver Can Save the Day
If you buy something through our links, ToolGuyd might earn an affiliate commission. 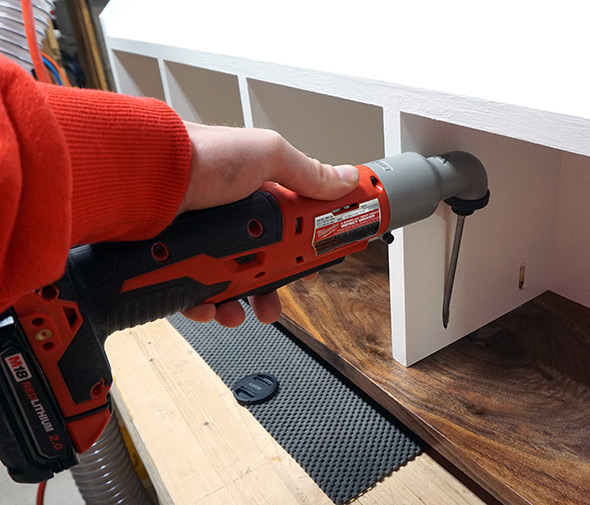 When Stuart sent me an M18 right angle impact driver sample to try out (sent to him by Milwaukee), I wasn’t sure what I was going to do with it. Now that I’ve had it for over a year, it has gotten me out of several jams that I don’t know how I would have solved without it.

Recently, as seen in the above photo, I used the right angle impact driver to attach the top section of a cubby I built.

I had used pocket hole construction, and while I might have been able to drive the screws in with a manual screwdriver, it wouldn’t have been easy with the top being made from walnut

This wasn’t an unexpected situation though, as I designed the cubby knowing that I could use the right angle impact driver for assembly. 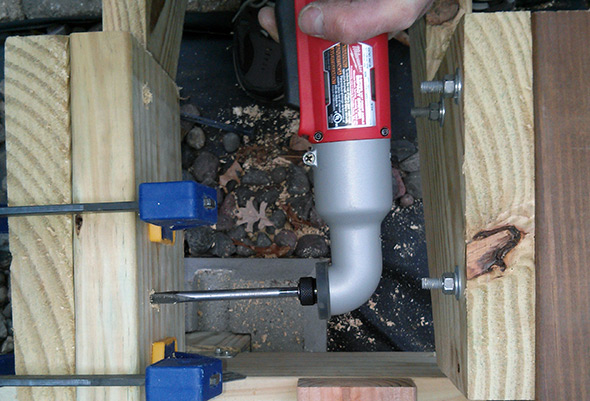 One situation where it really saved me was when I was building my deck last year. There were several situations I got myself into where I didn’t have enough clearance to use a drill.

For example, I needed to attach my stringers and didn’t have enough space between the joists for a regular drill. Luckily, I was able to chuck the spade bit into the right angle impact driver and drill the hole.

If you’re not into red tools, Makita sells a very similar tool: the XLT01Z 18V LXT angle impact driver which you can find as a bare tool at Amazon for $158-165.

If you’re not sure how much you’d use a right angle impact driver, you could buy the Ridgid JobMax version, with its modular and swappable tool head design, for $80. It’s also a bare tool.

Or if you already have a perfectly functioning impact driver you could pick up Dewalt’s right angle attachment. It’s a much cheaper investment, for $20 at Amazon.