ToolGuyd > Editorial > Coronavirus Pandemic Log: So, I went Shopping This Week, and Schools Here are Closed (3/15/20)
If you buy something through our links, ToolGuyd might earn an affiliate commission. 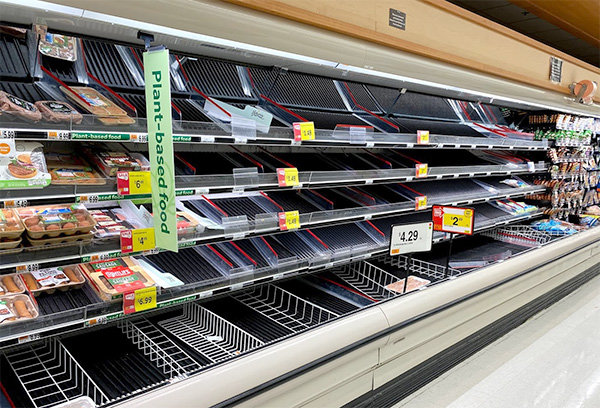 I don’t have much tool-specific coronavirus (COVID-19) news right now, but there are some general happenings I wanted to share. Part of this is for my own benefit, so I can look back and see what I witnessed and observed during these unprecedented times, part of it is to see whether your experiences have been similar.

We’ve seen shortages on respirators, and then on hand sanitizer and cleaning supplies. On Thursday, I went to the local supermarket at around lunchtime to pick up some supplies and saw that the meat section was pretty much cleared out. The parking lot was packed to the level we typically only see the weekend before Thanksgiving.

It wasn’t quite chaotic, but people seemed more frantic than usual, and a stocker was telling everyone how this is his “third zombie apocalypse.”

It was a bit unsettling to see the shelves barren of any fresh meat. There were plenty of processed meats and also “plant protein” products. I picked up a beef salami last week for my son, and also have a pack of hot dogs, or I might have bought some more.

I don’t think there are shortages, it seems that people are simple buying way more than they usually do.

News media has been saying that there’s no shortage on toilet paper, but why is it that I have barely seen any in the past two weeks? I probably should have bought more, but I bought a pack at the wholesale club a few weeks ago – as part of normal household shopping – before the nationwide run on toilet paper and *should* be okay. What worries me, albeit very mildly, is about whether I’ll be able to find toilet paper in a few weeks when it’s time for a resupply.

On Saturday, I went to a more favored supermarket around 25 minutes away, at around 1pm, and the meat shelves were mostly bare, but a delivery had just come in and the store associates were working to restock them. There were boxes and boxes of chicken, and then quite a few boxes of beef. I picked up a pack of cutlets and circled back three times until they had put whole chickens back on the shelf.

That’s the main reason I went to this supermarket – I wanted two of their small organic whole chickens. I’m planning to make my second-ever chicken soup, but I also want to roast a chicken in the oven. My kids were gobbling up some soup chicken before it was actually in the soup (I removed the white meat after it was cooked through), and I know my son likes drumsticks. Perhaps they’ll like roasted chicken too, and if not, more for me. Who says a pandemic has to slow down culinary explorations?

They were restocking the water section with store-brand gallons, although toilet paper and cleaning supplies were still scarce.

Heinz ketchup was mostly cleared out, but there were plenty of store brand ketchup to take their place.

I couldn’t find ground beef – although they did have a beef, veal, pork mix – but I picked up a steak to share with my son since we wouldn’t be going to the steakhouse anytime soon. I’m making a corned beef for next week.

There was plenty of produce, but no full-size or baby carrots.

One person had several cases of Snapple in their cart. A week before, I saw someone with a cart full of protein shakes.

Certain cold cuts and deli cheeses were sold out.

I bought a block of mozzarella earlier in the week, which was good because now there was none to be had.

4 lb bags of sugar were sold out for over at week now. During Saturday’s visit, I saw that the yeast was also all sold out.

It’s been maybe 3 visits (~2 weeks) since I’ve seen fresh garlic, but this store has run out of garlic before.

Watching the store associates completely filling the meat shelves – or at least the chicken sections – was reassuring. I also heard that a couple of chains across the country are now going to close a little earlier so that they can restock shelves. I’m not going to panic-run to any stores early in the morning as I’ve seen so far that I can get *most* of what I need mid-day.

It looks like there will be plenty of most things to go around, the key is to not panic.

Did you hear about the two guys who have nearly 18,000 bottles of hand sanitizer that they can’t sell online any longer due to anti-price-gouging rules?

The eggs were mostly sold out, except for what looked to be a recent resupply of large eggs of which there were plenty of boxes. There was a limit of 2 per customer, and so I bought two. I had planned on getting one dozen, but eggs last a while in the refrigerator. 3 out of 4 of us eat eggs, and so if I can’t get fresh chicken for a couple of days next week, that’s what we’ll have. I also have two bags of frozen chicken strips and nuggets in the freezer, for variety.

Ah, I forgot to mention it – the hot food bars were closed. That makes sense.

When entering the supermarket, everyone was using wipes, provided at the door, for sanitizing the handles of their carts. This supermarket had plenty of carts. At the local supermarket we went to on Thursday, all the carts were in use and so my wife and I both grabbed a basket each.

In all, I bought maybe one extra pack of chicken, and one extra dozen of eggs, and so I don’t think I went overboard. What I’m not mentioning is that I had already built a “quarantine cache” of food in case anyone gets sick and the four of us are stuck at home for 2 weeks. But, I did that in late February when authorities started to recommend it.

Speaking of being stuck at home… my son’s school is closing – “indefinitely.” Other districts in the area are closing schools for between 2 and 4 weeks. We just received word that my daughter’s preschool is closing for at least a week. We were hoping against this, but it was anticipated and I can’t argue with the decision.

The news is saying that in some areas they can foresee schools being closed through the rest of the year, but it’s impossible to know if it’ll come to that.

My wife is able to work from home, as am I, but this is going to be a tough time. Kids are social and active creatures and they don’t respond well to being cooped up at home. I’ll be looking for ways for my son to help me out with tool testing, or maybe I’ll design a project we can work out together.

To be honest, I don’t repsond well to being cooped up at home. But, it’ll be manageable. I hope.

I tried ordering some stuff from Amazon last night (Saturday), and was being quoted with a Wednesday ETA. 4 days? It was nothing too important. I changed my order and limited it to something for the kitchen and a personal healthcare item, and they should be arriving today. The other items could wait.

A 4 day ETA for Amazon Prime, though, that’s rough. To me, it suggests that they’ve been inundated with orders and are over-capacity. I don’t remember seeing this happen around Black Friday, Cyber Monday, or the July Prime Day sales events.

I tried to place an “Amazon Fresh” order, just to try it out, and there are no delivery time slots this week.

I would expect for more business dealings and services to slow down. If schools are closed, that means kids are home, and kids at home require adult supervision. Parents that need to be home are parents that probably won’t be working out of the home. I read last night that NYC is hesitant to close schools because of the effects doing so would have on transit workers, healthcare workers, and others, and that closing schools would also leave “hundreds of thousands of teenagers on the streets.”

Update: NYC has announced the closure of all public schools.

Things are getting a little scary, not just because people are panic-shopping at the grocery store, but that’s not the focus of this post.

What I’m wondering is about what these closures, shutdowns, and distances will also mean for pros who conduct service calls and what-not. Does a slowdown in commercial business activities translate to a reduced need for professional services?

I haven’t seen what things are like at the hardware store, but I imagine that home centers are seeing slower foot traffic. It’s been urged that if you don’t need to go somewhere, don’t, but I don’t know how much that will affects home centers such as Home Depot and Lowe’s, which typically see tradesman and consumer foot traffic.

I’d like to see what things are like at Home Depot and Lowe’s these days, but I’m staying put.

I’m just going to pretend there’s a blizzard and I’ve been advised to stay off the streets, because that’s a hell of a lot less scarier than reality.

To be truthful, the “how are going to entertain the kids in the house” is one of the most stressful part right now. *knock on wood* I’ll be happy if that’s the worst I need to think about, plan for, or accommodate.

So, how are you guys doing?

P.S. Please refrain from politics. It’s possible to talk about these happenings without stepping into political topic territorities.

See More of Our Coronavirus News and Posts Here