ToolGuyd > Hand Tools > Screwdrivers > New Craftsman Mini Bit Ratchet with Fine Tooth Gearing
If you buy something through our links, ToolGuyd might earn an affiliate commission. 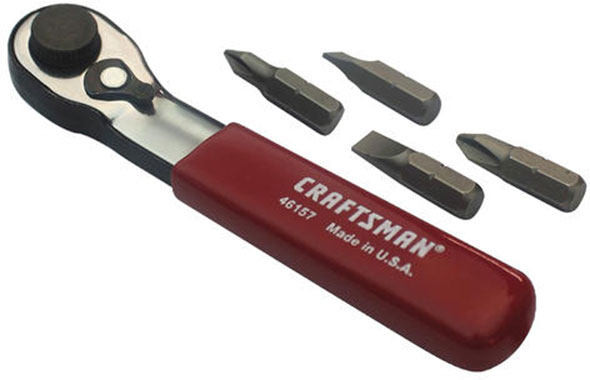 Bit ratchets are nifty little tools that work with common 1/4″ x 1″ hex insert screwdriver bits, and they make it easier to access fasteners in awkward tight areas, and in spots where you need speed and torque.

I reviewed a Beta bit ratchet set about a year and a half ago, and it’s awesome except for the price point. My bit ratchet of choice is a Wera model that I briefly showed off 4 years ago in a bit ratchet size comparison. At the time, I compared it to my trusty and inexpensive offset Craftsman bit ratchet. 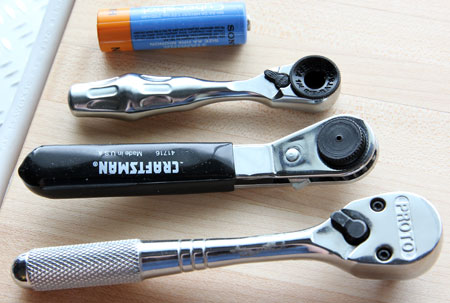 My older Craftsman bit ratchet is a decent tool. It’s not premiumly built or designed by any standards, but it works well, especially for whatever low price I paid for it. One thing I never really liked about that ratchet was how it had rather coarse and chunky gearing that could only be reversed by pushing on the side levers.

It also sports a new direction switch right on the top of the ratchet head for easier accessibility. The black knob that you see is part of the bit holder and is knurled for easier fingertip turning and control.

The ratchet head is angled with a 15° offset, which should help clear some obstructions in use. If not, you can always use the Craftsman bit ratchet – or any bit ratchet – with a standard 1/4″ bit holder as an extension.

It’s hard to gauge ratchets like this one without firsthand experience, but it looks to improve upon the current Craftsman bit ratchets. I wouldn’t expect it to go head to head against premium bit ratchets such as from Wera and Beta, but it provides better bang for the buck. I would rather see a nice contoured handle than vinyl-wrapped shapeless piece of steel, but for $10 there’s not much to seriously complain about.