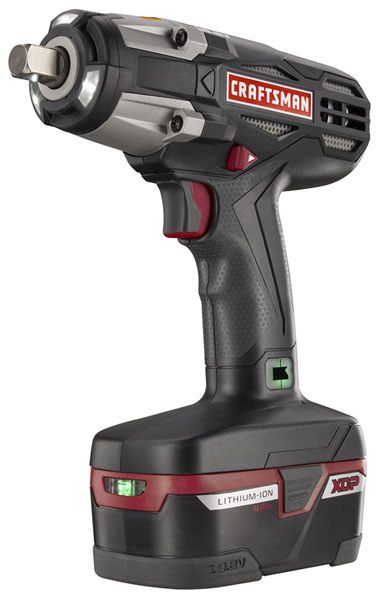 Craftsman has recently released their second-ever heavy duty XCP C3 cordless tool – a 1/2″ impact driver. The first tool of this lineup was a heavy duty drill/driver that I found to be a quite capable performer.

The new impact is bundled with an XCP 4.0Ah Li-ion battery pack and can deliver an impressive 300 ft-lbs (3600 in-lbs) of nut-busting torque.

It has been quite some time since Craftsman’s first XCP cordless tool launched. So long in fact that I had wondered whether there was ever going to be another. While I would have thought that the second XCP tool would have been an impact driver, a heavy duty impact wrench is certainly most welcome.

The lack of an XCP impact driver just yet isn’t surprising, as Craftsman probably isn’t too eager to compete with their own relatively multi-speed C3 impact driver. But on the other hand, it doesn’t look like the multi-speed impact ever hit the market. It was supposed to be released in Fall of 2013, but it still isn’t listed in Sears or Craftsman’s product catalogs.

Correction, the ID2025K kit and ID2025 bare tool were released a while back. I haven’t seen them in-store, and were elusive in the Sears.com search listings when I checked. Double-checking with Craftsman reps confirmed that the 3-speed impact launched and is still available.

The front end of the new Craftsman impact wrench shares similarities with Ridgid’s 18V heavy duty impact wrench ($139 for the bare tool, via Home Depot), indicating that TTI could be the OEM for this model.

While the new Craftsman impact won’t turn a lot of pro’s heads, value-minded pros, weekend warriors, and DIYers will probably appreciate the decent torque rating and great bang-for-the-buck value. Craftsman C3 users will definitely also appreciate the new impact option. The C3 lineup doesn’t always offer the latest and greatest cordless innovations, but there’s great selection and you can be sure that the platform will be around for a while longer. I’m optimistic about this one.