ToolGuyd > Power Tools > Cordless > What Will New Craftsman Cordless Power Tools Mean for Porter Cable?
If you buy something through our links, ToolGuyd might earn an affiliate commission. 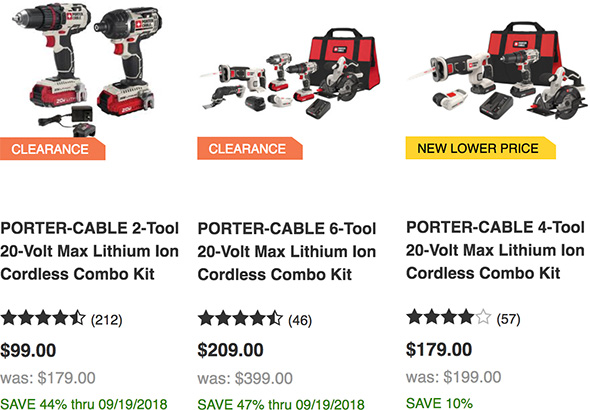 We recently posted about a slew of new Craftsman 20V Max cordless power tools, and I thought it would be interesting to wonder about what this might mean for Stanley Black & Decker’s Porter Cable brand.

Note: I wrote this post before the Craftsman media event, and even before posting my Craftsman V2o cordless tool teaser post. Everything is speculative. I couldn’t find the opportunity to ask about this topic, and so aside from the addition of this paragraph, the post remains unchanged.

As we’ve seen, Lowes and Craftsman have formed a very strong initial relationship. We know that Craftsman tools will also be sold at Amazon and other dealers, but with Lowes being a first-launch partner (at the least), it is safe to assume that the special partnership will continue.

But, like other retailers, Lowes has limited shelf and floor space. They have finite marketing resources to emphasize product promotions and new offerings. How much can they carry in warehouses that they don’t have room for in stores?

Over the years, Lowes and Porter Cable have enjoyed a strong relationship.

At first glance, many of the new Craftsman 20V Max power tools seem to draw strong parallels to many of Porter Cable’s 20V Max tools.

This is a drawing of a new Craftsman 20V Max cordless LED worklight, discovered via a PDF copy of its user manual.

Here is a current Porter Cable worklight of similar design.

So… will Lowes expend any shelf space or marketing efforts to sell Porter Cable cordless power tools when Craftsman tools carry greater brand name potential for what look to be practically the same tools?

At times like this, it helps to remember that power tool brands don’t only sell to end users; their primary customers are retailers and distributors.

Will Lowes have Porter Cable promo displays during the winter holidays, when the same displays could feature similar Craftsman tools instead?

Will Lowes be willing to stock everything that both brands offer?

Will users still be interested in Porter Cable cordless power tools, or will those not already married to the platform find favor in Craftsman equivalents?

With all this in mind, will Lowes order as many Porter Cable cordless power tools, and if not, how will that change the presence of these tools at other distributors and dealers?

Big box retailers are very important when it comes to tool pricing. If a brand can only sell a smaller quantity of tools to independent retailers which often have lower visibility than big box sellers, the cost per item will be higher than if they can also ship a higher quantity of tools to big box sellers and their thousands of physical store locations.

In my mind, this all suggests that the emergence of new Craftsman cordless power tools and other tools, led by Stanley Black & Decker as the new owner, will prompt changes for the Porter Cable Brand.

Maybe not, but I see the “writing on the wall,” and I also believe that this could be a good thing.

Can you see any way for Porter Cable’s power tool offerings to not be supplanted by Craftsman’s?

6 years ago, I wrote: Porter Cable Brand Confusion and Mixed Messages. What has changed since then? The brand launched decent 20V Max drills and impact drivers, and then a whole bunch of value-focused Ryobi-grade tools.

“Ryobi-grade” isn’t meant as an insult. Porter Cable sought out to compete with Ryobi’s 18V lineup, and I think that they accomplished this well, at least with many of their 20V Max power tool options.

In the way suggested to me by an industry observer a few years ago, Porter Cable has had somewhat of an “identity crisis.”

Perhaps this will be a good opportunity for Porter Cable to forge ahead on a different path? Or it might be an opportunity for Stanley Black & Decker to court other big box retailers, but that seems less certain.

In the nicest way possible, I would argue that Craftsman cordless power tools have now made Porter Cable’s 20V Max lineup extremely redundant. There’s no room for Porter Cable to inch upwards, with respect to quality, features, and price, because they’d then enter Dewalt’s space, and no way for them to drop downwards, where they’d encroach upon Black & Decker territory.

We are bound to see changes. What do you think will happen to the Porter Cable brand and their products?

Ultimately, I think that this will be an opportunity for Porter Cable to rehone their focus. What should (or could) Porter Cable be known for, 5 or 10 years from now?

What About Craftsman Cordless Power Tools?