ToolGuyd > Power Tools > Cordless > New Craftsman Cordless Tile Saw
If you buy something through our links, ToolGuyd might earn an affiliate commission.

Craftsman has added a new cordless tile saw to their V20 cordless power tool system (CMCS4000M1). It features a 7″ blade, 17″ cutting capacity, water containment for use indoors or outside, and a sliding table. 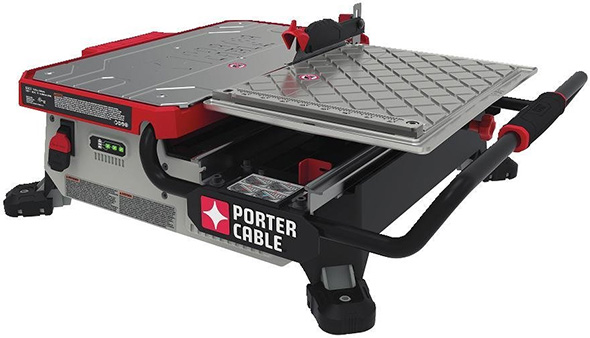 Porter Cable’s is the only other cordless tile saw that I know about. The two brands’ saws look very similar, which is no surprise since Stanley Black & Decker owns both brands.

At the time of this posting, the lowest pricing on the Craftsman saw is $302.79, with a list price of $319. The price at Lowes is $329. Neither retailer has the saw in stock yet. We could probably expect to see a “new low price,” if not when it starts shipping then perhaps soon after.

The Porter Cable 20V Max kit is currently $220 at Amazon, and that’s for the PCC780LA kit which like the Craftsman comes with a 4.0Ah battery, charger, and standard accessories. The Porter Cable cordless tile saw kit launched at $249.

We’ve reached out to Craftsman to see if there are any notable differences between the two brands’ products, and will report back once we learn more. We also asked for official specs.