ToolGuyd > Hand Tools > Clamps > Craftsman Hold Down and Push Peg Clamp Review
If you buy something through our links, ToolGuyd might earn an affiliate commission. 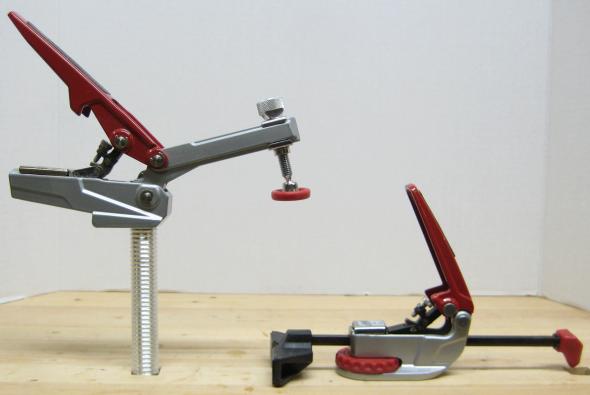 When I built my workbench, I cut 3/4″ square dog holes in the surface because I thought they would be useful. I found that I never really use them though, as I never got around to buying proper hold fasts. The only time I end up using the dog holes is when I need a stop, which I’ll often just use a 3/4″ dowel for.

So when Stuart asked if there were any Craftsman tools I was looking to review, I expressed interest in trying the new Craftsman Push and Hold Down Peg Clamps.

From my previous experience with Rockler’s T-track auto hold down and push clamps, I figured these new Peg clamps would be really useful for clamping directly on my workbench, rather than having to move to my T-track table.

I also received the Craftsman peg clamping workbench and the long and short peg fences. The peg clamps were released alongside the Craftsman workbench, but can be used separately, with your own wood-topped workbench. I reviewed the peg table and fences separately. 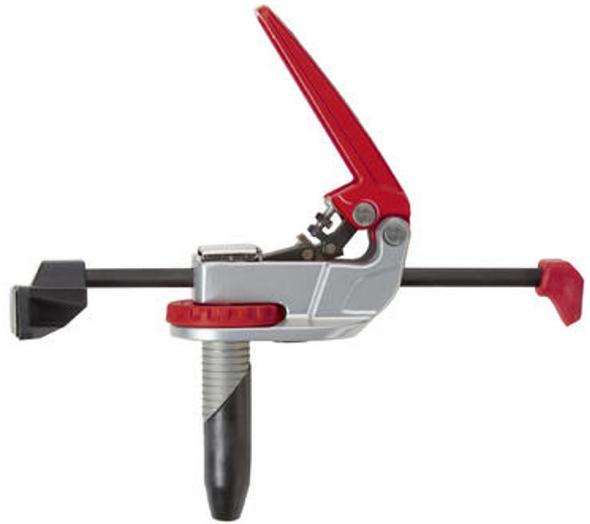 The push peg clamp is designed to push against a stop, whether it be a peg fence or another push peg clamp. You can adjust the steel push rod up to 3-1/2″ to match the width of your workpiece, and when you lock it down the clamp will apply whatever force you’ve set with the force adjustment screw.

A split peg fits in a 3/4″ round dog hole, but can also fit in a 3/4″ square hole, or a 20mm dog hole. This peg allows the clamp to rotate in any direction you need. And when you tighten the thumb wheel, the peg expands and grips the sides of the dog hole, securing the clamp so it won’t turn or pull out.

The face of the clamps is made with a non-marring hardened polymer, and it has a notch cut out of the center to apply pressure to corners or round materials. 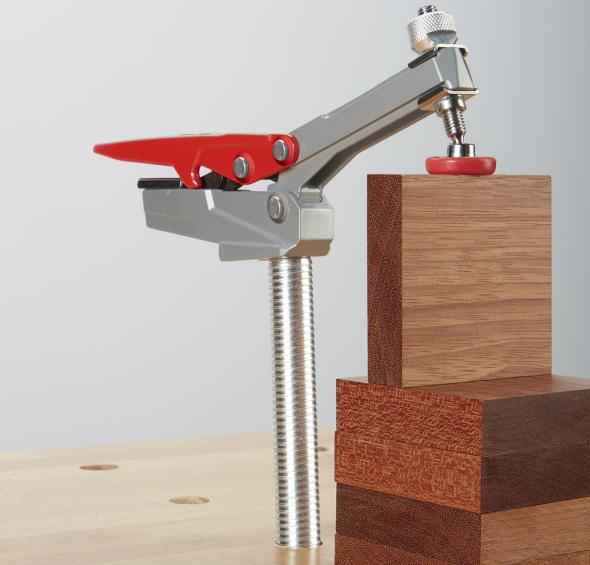 The hold down peg clamp is designed to apply downward pressure on a workpiece to hold it against a flat work surface. This clamp slides into either a 3/4″ round or square dog hole by means of a ridged aluminum dog peg. Rather than expanding like the split peg, this ridged peg grips the side of the hole when a lateral pressure is applied.

With the clamp on top of this peg you can clamp materials up to 6-1/2″ above the work surface in any direction, all while maintaining the force you set with the adjustment set screw.

The non-marring pressure pad can be positioned along the lever arm and also adjusted up and down to give you more flexibility in where and at what angle it contacts the workpiece. For instance, you might need to move the pad because it is in the way of where you want to drill a hole, or you can adjust the pad to account for the dog holes in your bench being a little bit to close or far away from the piece you need to hold. 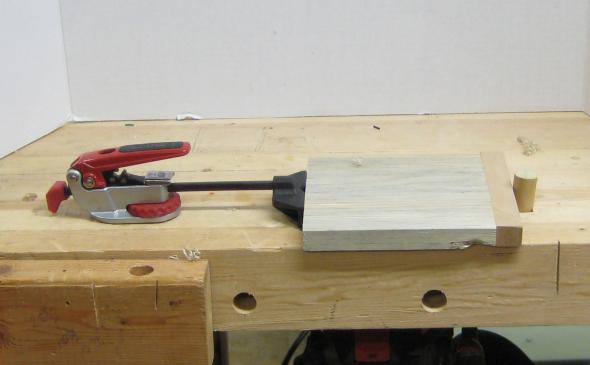 As I mentioned above, the push peg clamps require something to push your workpiece up against. You can either use a fence, a stop, or another push peg clamp. The holes on my bench are spaced 6″ apart, meaning that when I use a single push peg clamp with 3-1/2″ of adjustability, sometimes I’ll have to insert a scrap piece for the clamp to reach.

Because of the need for extra hardware to use these clamps, and the spacing of the bench dog holes, I really wasn’t able to put the push peg clamps through their paces. On the other hand I found the hold down peg clamps extremely versatile. 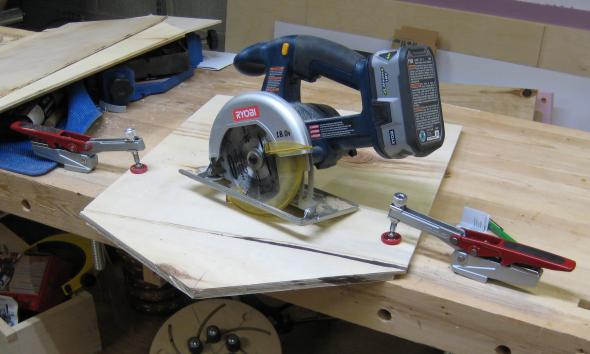 I left the clamps lying around on my workbench and found that I grabbed them preferentially over quick or f-style clamps for holding things to my bench. Above I’m using two hold down peg clamps to secure a piece of plywood while cutting it with a circular saw. 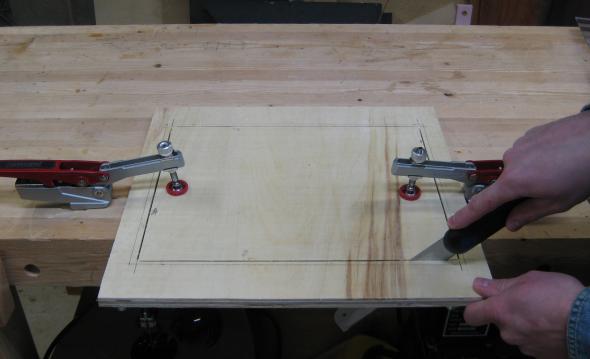 When I cut a window opening in a door, I first roughed the cuts with a circular saw and then finished the cuts with a hand saw. The hold down clamps were really handy in this situation because I could easily make the cut, open up the clamps, spin the board, and clamp it down again quickly.

When you have to do this eight times (I flipped the board over halfway through so I could always cut from the same position), being able to quickly hold and release the workpiece make the job go really fast. 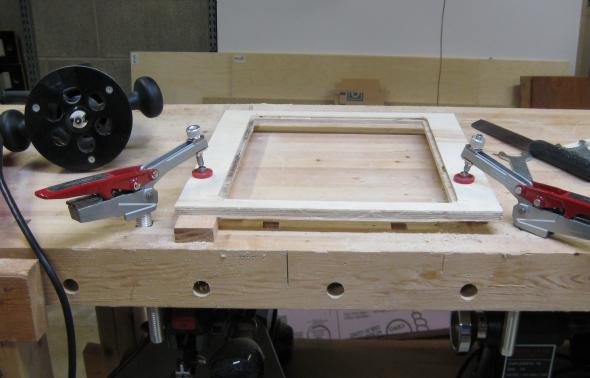 These clamps also came in real handy when I had to route the rabbet for the window to sit in. I couldn’t just put the door on a non-slip pad and route the entire opening at once, as the bit was longer than the thickness of the material. I had to elevate the door frame to get around this.

Using the hold down peg clamps, I could route one half the frame, release the clamps, and flip it around. The clamps also allowed me to clamp deeper into the center of the bench than other clamping methods. This made the work much more stable. 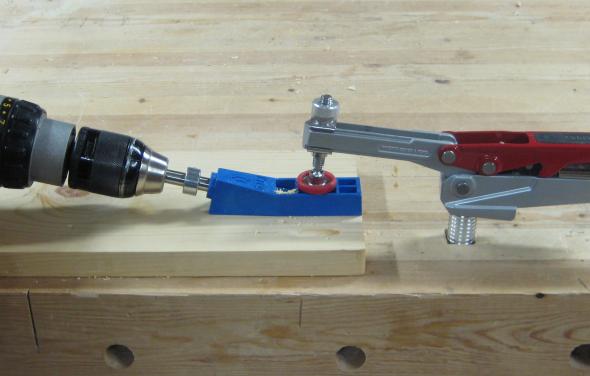 Finally, I like to cut pocket holes on my bench with a single hole jig and a clamp. With the hold down peg clamps I found it easy to quickly set up the jig to make a hole and then reposition it to drill another hole.

I did find that sometimes I needed to hold the jig when I was starting the hole, but I have to do that with a quick clamp sometimes too. Most of the time it’s because I’m not good about cleaning away the chips from the previous hole and they get between the jig and the workpiece.

While I was using the clamps, I got the impression they are well built and pretty darn strong. At first I also didn’t know what to make of the long, ridged aluminum peg on the hold down clamp, but after using it, I found it wasn’t as awkward as I expected.

These clamps are also very comparable to using to the Rockler auto adjusting T-track clamps, but one huge advantage they have is that it’s cheaper to get into using the peg clamps instead of purchasing expensive T-track or T-track router bits. All you need to use these peg clamps is a surface and a 3/4″ drill bit. And at $35-$40 for a single clamp, not having to spend the extra dough on a T-track table, even a DIY version, is going to make a difference in your wallet.

While I found the hold down clamps to be really useful, I have not yet found a good use for the push clamps. Part of the problem is that, given how I spaced out my preexisting dog holes, they need an extra stop or fence something to push up against. The other part is that, while they hold pretty securely, they tend to push the workpiece up and away from the surface of the workbench.

That isn’t to say that with the right setup they wouldn’t be use really useful. In fact, I’m thinking about drilling another row of dog holes in my bench, just to be able to use them correctly.

These clamps are made by Armor, and appear to be identical to the Armor Auto-Pro Dog clamps available at Rockler. The only difference we can tell is that the Craftsman clamps are significantly less expensive when on sale, which is often. 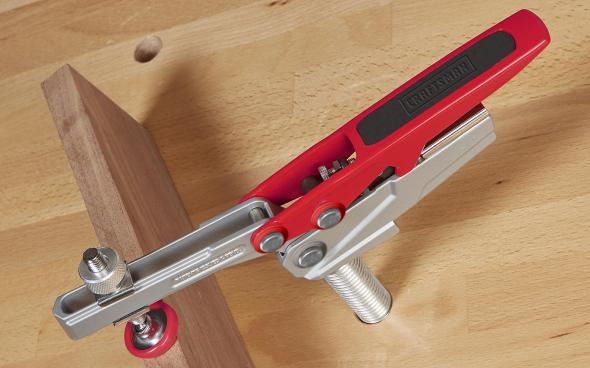 Next, I’ll show you these clamps in use with the Craftsman peg table and peg fences, where you’ll see how both of these clamps become much more versatile with a grid of dog holes than on a work bench with a single row of dog holes.

Thank you to Craftsman for providing these test samples unconditionally.