ToolGuyd > Hand Tools > Mechanics' Tools > New Craftsman Mach Ratchet and Socket Set
If you buy something through our links, ToolGuyd might earn an affiliate commission. 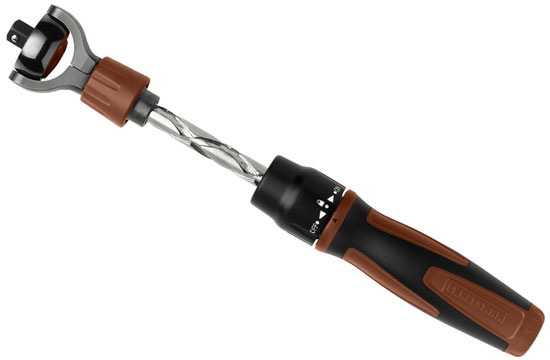 A reader emailed in, asking for our opinion on Craftsman’s Mach tools. I hadn’t heard of this line before, so I looked it up and found that there’s a new Mach ratchet and a socket set.

It looks like a swivel-head ratchet, similar to the couple of Wera Zyklop ratchets, and set of Gearwrench Roto Ratchets that I have really grown to like using. Several other brands also make these types of ratchets, and Gearwrench recently introduced palm-style gimbal ratchets.

Swivel-head ratchets can be used in a screwdriver-like manner for quick spinning of loose fasteners, and as ordinary ratchets for final tightening or initial loosening. They can also be used at in-between angles to better access fasteners in tight locations. I tend to prefer using them on socket head screws and hex-head bolts, which aren’t as easy to turn or spin by hand.

Craftsman says that the new Mach ratchet is “built for speed turning sockets 16 times more efficient than a regular ratchet with a swing arch of 60-degrees”. I don’t know what they mean by this, as most ratchets I know of have swing arcs of 3° to 10°.

Honestly, I am unimpressed. In theory, this could be a great product. Swivel-head ratchets are awesome to use, and the Yankee-style push/pull mechanism might make the ratchet even speedier as a screwdriver.

How often do you see Yankee-style screwdrivers these days? I own one, but never use it. Ratcheting screwdrivers are simply quicker and easier to use.

The product description says that the Mach ratchet combines the speed of a “Push Twisting” screwdriver, a ratcheting screwdriver, and the higher torque and access of a ratchet. To me this suggests the ratchet is designed to be twisted and pushed at the same time when in screwdriver mode, which seems like it could be uncontrolled. I could see a user push/pulling the handle, or twisting the handle, but both at once?

Some of the newer Craftsman tools, such as the dual-head wobble ratchet set seem to be aimed at homeowners and beginner DIYers, so I’m not quite sure what to make of the new Mach Series tools. Right now it looks to me like Craftsman saw the Christmas and Father’s Day seasonal successes of Kobalt’s Double Drive tools and sought to produce something similar. While that by itself is not a bad thing, I cannot help but feel that the new Mach ratchet looks rather impractical.

Then there’s the price. $50 for the ratchet and $100 for the set? That seems a little steep for the target audience I believe Craftsman is going after.

I realize it’s not fair to judge a ratchet I haven’t used or even seen yet, but I have strong concerns about the Mach ratchet.

What do you think – is the Mach ratchet a potential winner, or something you would never consider adding to your toolbox?