ToolGuyd > Hand Tools > Bit Holders & Drivers > Craftsman Mach Series T-Handle Driver Looks Like a Winner
If you buy something through our links, ToolGuyd might earn an affiliate commission. 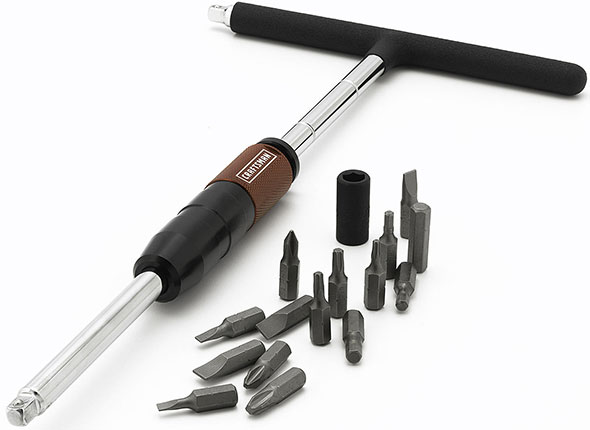 I’m not going to sugarcoat it – some of Craftsman’s Mach Series tools are a bit gimmicky and impractical. The Craftsman Mach Series tool lineup includes a ratcheting sliding adjustable wrench, an offset screwdriver bit driver that’s semi-decent, and a swivel-head push-pull ratchet that’s available by itself and as part of a set.

The Mach Series tools just aren’t what I would consider everyday tools.

This T-handle driver is also part of the Mach Series lineup, but looks to be a big step above the others in terms of usefulness. I haven’t yet handled one, but it looks like the kind of tool that I could and would use on a regular basis.

To start off, you have a T-handle 1/4″ socket driver with two square drive ends. This means you can use it to quickly turn standard sockets. It also comes with a 1/4″ hex bit adapter that allows you to use the T-handle with standard screwdriver bits. You also get a 15 piece bit assortment with the set.

Then, you have the adjustable aluminum speed collar. It can be moved to 3 different lockable positions along the main handle shaft, and is free-spinning. This means you can hold the tool in place via the collar while you spin the handle to quickly install or remove fasteners.

This look quite similar to the T-handle speed wrenches I posted about a couple of months ago, but with one less collar position, the addition of a higher torque 1/4″ square drive on the short end, and the inclusion of a hex bit adapter and screwdriver bit assortment.

I wish that Craftsman would also introduce this with built-in 1/4″ hex bit holders, although my last experience with a Craftsman 1/4″ magnetic wrench was not that positive. Hopefully a 3/8″ size is in the plans for Father’s Day or next year’s holiday season.

I’ve used free-spinning collars on a bunch of tools, most notably Wera Zyklop ratchets, Bondhus-made Park Tool L-driver handles, and a PB Swiss T-handle screwdriver bit driver. Such a feature can be a huge convenience at times, and it doesn’t really get in the way when not needed.

I’m not in love with Craftsman Mach Series tools, although I don’t object too much to their offset and convertible T-handle screwdriver. This one, on the other hand, looks to be a guaranteed winner.

There doesn’t seem to be any real downside to the design. If I had to nitpick, I would comment about how the aluminum collar could be a little smaller, but I think that its extra meatiness could even be a benefit. I won’t know for sure until I can get my hands on one to test out and play around with.