ToolGuyd > Power Tools > Cordless > Craftsman Nextec High Capacity Battery with Built-in LED Flashlight
If you buy something through our links, ToolGuyd might earn an affiliate commission. 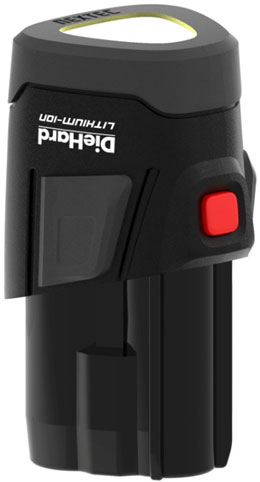 Craftsman is soon releasing a new Nextec accessory that makes us wonder why no brand has come up the idea sooner – an extra capacity lithium-ion battery pack with built-in LED flashlight.

We do not discuss this often, but we’re quite fond of Craftsman’s line of Nextec power tools. These 12V compact cordless tools are typically well designed, durable, and pack enough power and features for light and medium-duty DIY applications.

The new battery pack features a 1.6Ah capacity and can be used as a drop-in replacement for older/lower-capacity Nextec batteries. The integrated LED light is operated via a red pushbutton switch and can be used with the battery attached to or separate from a Nextec tool.

The new higher capacity Nextec battery with built-in LED flashlight will be available starting in October 2012, and will be priced at around $35.

We don’t imagine that the LEDs will be super-bright, but there are times when any flashlight output is better than nothing. Overall this seems like a great idea and we’re eager to see how it works out. Hopefully the new battery will be bundled with Nextec kits in the future, but for now it looks to be a standalone accessory.

Sneak Peek: This is Every New Milwaukee Tool We Saw at NPS17