ToolGuyd > Hand Tools > Clamps > Craftsman Clamping and Assembly Table
If you buy something through our links, ToolGuyd might earn an affiliate commission. 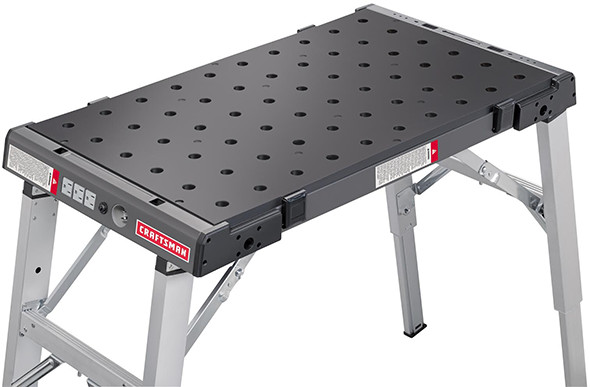 Craftsman has come out with a new Peg Table and some accessories to go along with it. It’s a simple concept, but one that works well for clamping and assembly tasks. The table has a grid of holes (we’re still checking on the size) that allow for very flexible placement of your clamps or stops.

The Craftsman Peg Table has folding legs which extend for use and retract for storage, making it easy to store and transport. It’s designed to be lightweight and easy to carry to and from your project. 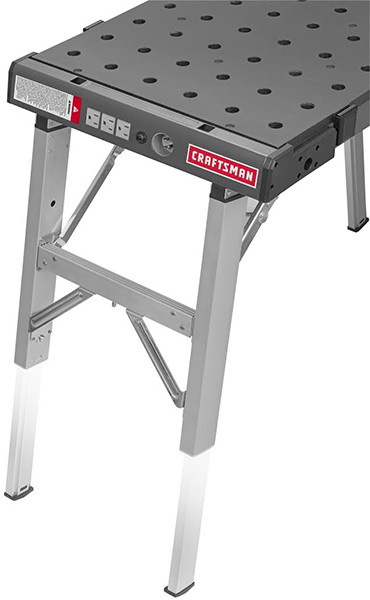 It looks like the legs might be adjustable, but maybe not. We’ll have to wait until it’s released to know for sure.

Craftsman also came out with a bunch of fitting accessories for their Peg Table (model number 49812). 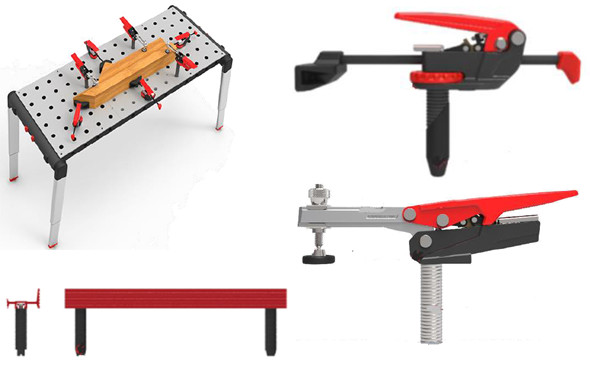 Their early-look press release had some images of a prototype table and what look to be renderings of the accessories. We’re working on getting some better images. 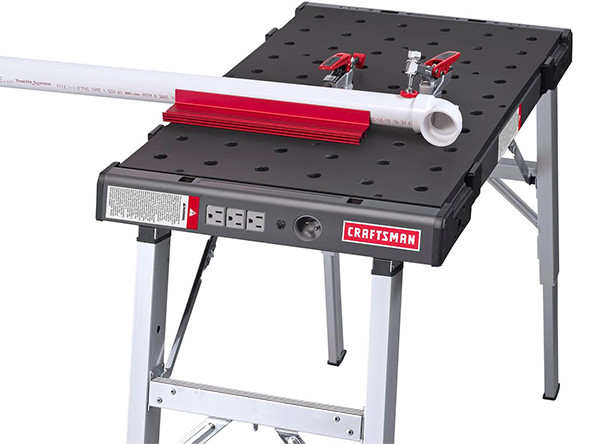 Here you can see all three clamping accessory types in action. There’s a fence, which can be used as a work stop to brace material against. A push clamp is applying pressure to the pipe, so that is held immobile against the fence for working. There is also a hold down clamp which applies pressure to the pipe so that it doesn’t lift up during working.

It’ll be curious to see if these accessories are made by a woodworking company. They don’t quite look like Bessey auto-adjusting clamps, or Rockler’s new T-slot auto-locking clamps.

Both of the new Craftsman peg clamps both feature automatic adjustment mechanisms, and can be used in any of the Peg Table’s holes, and in any direction. Users can set the clamping pressure via an adjusting screw, and it doesn’t need to be touched again unless a different level of force is needed.

The fences also allow for some adjustability. There are 2 sizes – 8-inch and 12-inch, and both are completely reversible. One side is 5/8″ tall, the other is 1-1/4″ tall, which means you can use it to brace certain material thicknesses, such as 3/4″ plywood and 2x lumber, without the fence protruding above the work surface.

One side of the Craftsman Peg Table has a 3-outlet power strip that is fed by an extension cord, and the other side features a couple of hand tool storage slots.

I can see how, with one or two fences and one or two push clamps, a piece of wood can be easily sanded on the Peg Table. Or it could perhaps be worked on in different ways.

What I’m really hoping is that the grid’s hole sizes can accommodate other brands’ dog hole accessories, which would further push its versatility into the must-have zone.

The fences come with 3-inch pegs, and the hold down clamp has a 7-1/2″ peg that allows the clamp to be raised up to 5-1/2″ above the table to accommodate taller workpieces. To me this suggests a pretty thick and solid worktop. Maybe it’s solid plastic? Even laminated MDF or pegboard would be a good option, as long as it’s solid at the core.

The accessories are a little steeply priced, and most users will probably want a pair of everything – at the least. But that also suggests that Craftsman or their OEM partner didn’t skimp out on anything. All of these prices might also be “suggested” prices. A lot of the time Craftsman has a list price and then a perpetual sale price.

My first thought was that this could be a modified Vika workbench, but I’m not convinced. Do you have any thoughts as to who the OEM company might be? Not that it really matters.

Overall, I think the Craftsman Peg Table and its accessories look like solid products, and am eager to check them out to see if they’re as functional and sturdy as they look.