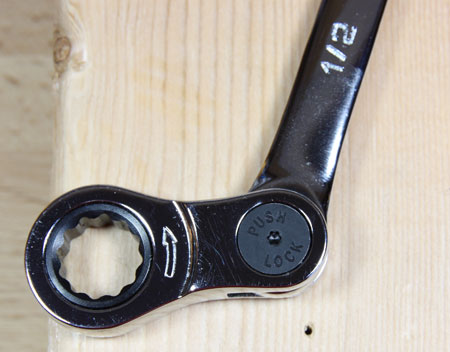 With their pivoting box ends, Craftsman’s ratcheting elbow wrenches are anything but ordinary. Possibly inspired by similarly styled indexable ratchets, these elbow wrenches are designed for use in tight spaces and situations where a fastener may be obstructed.

Curious about whether these new wrenches were innovative, gimmicky, or both, we set out to review them. In the end, we ended up liking the wrenches quite a bit!

The primary benefit of the elbow joint is its ability to reach around obstacles to access fasteners. With a 180° range of motion, the pivoting box end can also tighten or loosen engaged fasteners with an easy push-pull motion of the wrench.

Although push-pulling one of these wrenches is quite easy on the hands, it is not exactly efficient for high-torque situations. For these jobs, the wrenches’ elbow joints can be locked into one of 13 set positions every ~15° with the push of a button.

As Craftsman says, lock it for leverage and getting around obstructions, unlock it to speed fasteners on or off with a piston action.

To be honest, push-pulling these wrenches felt a bit unnatural at first. However, using the wrenches in such a manner was not too difficult to get a feel for. Before long, it felt natural to use the wrenches in their intended manner. To be fair, about half the time they were used, the wrenches’ box ends were locked in at 0°.

After toying with the unfamiliar ratcheting elbow joint for a bit, I examined the build and finish quality of the wrenches. To my surprise, I was quite impressed. The wrenches felt sturdy and comfortable to hold, and the chrome finish was nearly impeccable.

As mentioned, once I got passed the wrenches’ learning curve, I was using them as intended with relative ease. At first I was a bit hesitant to really torque the ratcheting mechanism, but it seemed to handle my superhuman strength without so much as a hiccup.

Compared to similarly sized Craftsman and Gearwrench wrenches that were on hand, the ratcheting elbow wrenches were longest. This provided me with a bit of comfort – if the wrenches couldn’t handle some tough use, they would have been built a bit shorter. Right?

Speaking of wrench lengths, the set’s packaging claims “up to 30% longer for more leverage” and shows a ratcheting elbow wrench lined up next to a Craftsman raised panel wrench. Not a fair comparison at all.

The sides of the wrenches, somewhat square and rounded off, are comfortable to hold and really press one’s hand against. The box and open ends may look a bit bulky, but were found to be comparable in size to the ends of other ratcheting wrenches.

Just to sum it up, these wrenches feel strong, well designed, well built, and they function exactly as advertised.

We managed to find a few scenarios that made good use of the wrenches’ unique design. Some of those fastening jobs could have been accomplished differently, but it became clear that the wrenches’ elbow jointed box ends saved a bit of time and effort in the end.

In contrast to Craftsman’s previous commitment, these wrenches are made in China.

If you plan on encountering many fastener obstructions, then you’ll probably get a lot of use out of these wrenches. That’s not to say that they cannot serve as a general-purpose wrench set, but most users would benefit more from a larger assortment of non-ratcheting combination or reversible ratcheting wrench sets in that regard.

Aside from one wrench out of seven being a bit stiff at first, we couldn’t find any flaws with these wrenches. Given their respectable quality and innovative utility, we recommend ’em!

Craftsman provided the review sample unconditionally.  Review samples are typically given away, donated to a local charity, or in certain cases retained for future review, benchmarking, or comparison purposes.

Check out our photo gallery on the next page!