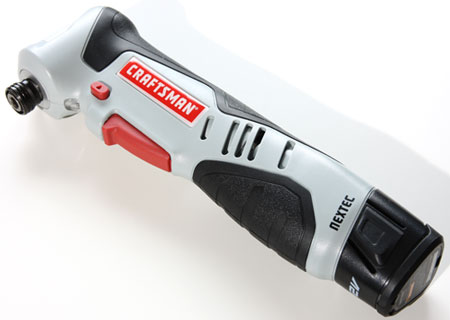 We recently reported that Craftsman has added a new right angle impact driver to their 12V cordless Nextec lineup. The new RAID is designed for close-quarters work but should provide enough power for general purpose fastening tasks as well.

Eager to see what it can do, we put Craftsman’s Nextec RAID to the test. In this hands-on review we’ll discuss a few things we absolutely love about the tool, and a few things we don’t.

The first thing I noticed about the Nextec right angle impact driver is that it is lightweight and well balanced. It has a simple grip, but is surprisingly comfortable to hold and use.

On the sample we received, the reversible switch is a little on the loose side. There is little risk of accidentally switching directions, but I prefer a stiffer toggle.

Bit changes are quick and easy, but it is important to note that the RAID’s chuck only accepts 2″ power bits, not 1″ insert bits. To use insert bits, you will need an impact-rated bit holder. 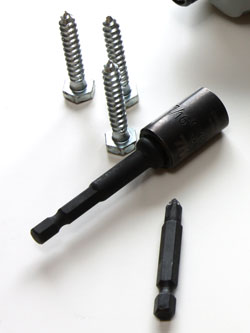 The RAID boasts a 0-2200RPM motor capable of outputting 700 in lbs of torque. While not the quickest or most powerful impact driver we’ve tested, the Nextec RAID is still fairly speedy. Driving 1-1/2″ drywall screws with the RAID was about as quick as with the other impact drivers on our test bench. However, the RAID was noticeable slower when driving larger fasteners, such as 1/4″ lag bolts.

Even with the slighest trigger squeeze, the RAID was a bit faster than expected. I wouldn’t feel comfortable using it on small screws and fasteners, but it did help out with longer and larger screws. Still, I would have prefered a more sensitive trigger control.

The RAID features an LED worklight and battery level indicator. The worklight is well placed and outputs an evenly bright white light, no complaints there.

The battery fuel gauge was a little misleading at first. On first examination, it appears that there are four levels that correspond with varying levels of charge, but it turns out that there is only one LED. At full charge, the fuel gauge indicator is green. At about half capacity, it turns orange, and when depleted it turns red.

An electric brake stops the motor quickly when the trigger is released. The kit includes a DieHard battery, 30 minute charger, and a couple of impact-rated bits and nut drivers to start off with.

There is no doubt that the Craftsman Nextec right angle impact driver is a quality tool. Its grip offers great ergonomics and it is quite comfortable to use, even overhead. Although its variable speed trigger seems to skip slow speeds altogether, it offers reasonable control of the medium-high speed range.

Right angle drills and driving tools are incredibly versatile for work in tight corners and for some projects absolutely necessary. While not the smallest 12V RA impact or driver on the market, Craftsman’s Nextec RAID is still quite compact and offers excellent ergonomics and comfort.

The RAID is not as powerful as pistol-grip 12V impact drivers such as Bosch’s PS41, but it can still exert a reasonably high torque for heavy-duty applications. It’s a handy tool and at $100 the kit is a pretty good bargain.

Thank you to Craftsman for providing the sample for this review unconditionally. Review samples are typically given away, donated, or in some cases kept for further testing or benchmark and comparison purposes.

New Craftsman Gyroscopic Cordless Screwdriver Will be a BIG Hit