ToolGuyd > Aesthetics > New Brand Images for Craftsman and Stanley
If you buy something through our links, ToolGuyd might earn an affiliate commission.

Craftsman and Stanley, two very large and powerful tool brands, both kicked off new marketing transformations earlier this month. With Craftsman, the changes look to be part of a new advertising campaign, while Stanley’s changes are more about their brand image, identity, and positioning.

Craftsman: Made to Make

Craftsman is looking to reconnect with DIYers and makers. Who are makers? Everyone from hobbyists to professionals. It’s one of those broad and vague descriptions that everyone defines differently.

A recent Fox business article describes how Craftsman is seeking increase their connection with customers through social media. They’re looking to inspire and spark greater engagement with customers and potential customers.

It will be interesting to see where they go with this.

I feel that Craftsman is definitely on a better path than they were six months ago. They might not be on the best path, at least not yet, but with a little coaxing they might just get there soon.

Stanley has introduced a new brand identity that will cover their tools, services, and other businesses. Their last logo redesign was in 1995, but it was time for change.

The angular cur in the letter N in Stanley produces  an upward arrow-like triangle that speaks to the concept of “Action.”

In addition to the new logo, it looks like Stanley designers have worked on new packaging for some of the brand’s signature hand tools. The products themselves seem to have been updated as well. 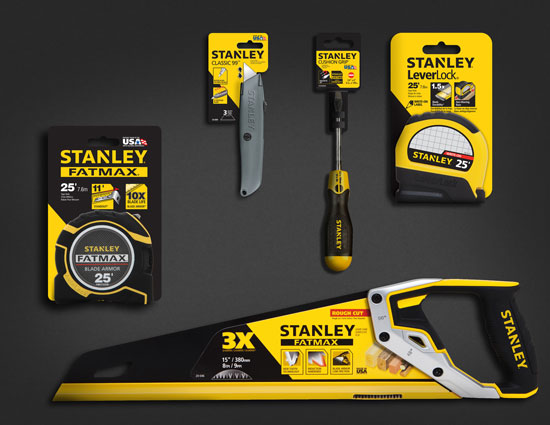 Personally I think that performance in action sounds better on paper than when I say it aloud. And if I repeat it too many times, it starts to sounds strange on paper as well. But the logo itself is a strong visual, and I really like the new look.