ToolGuyd > Editorial > Craftsman to Split from Sears as a Spinoff?
If you buy something through our links, ToolGuyd might earn an affiliate commission. 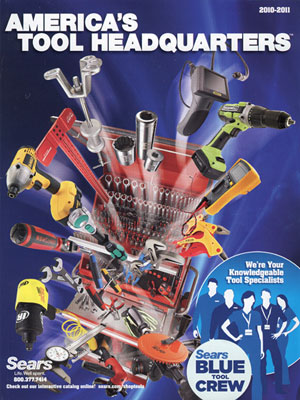 There’s definitely something strange going on between Sears and their Craftsman brand, and I have a feeling that it goes way beyond the recent agreement to sell Craftsman tools at Ace Hardware. Just take a look at the cover of Sears’ 2010-2011 tool catalog – Craftsman tools are missing!

As you can see, the cover of the 2010-2011 tool catalog highlights Sears as being America’s Tool Headquarters, with some emphasis placed on the Sears Blue Tool Crew. There’s no mention of Craftsman at all! Sure, there are several Craftsman hand tools on the cover, but they’re among tools from approximately 16 other tool brands!

Let’s take a look at the evidence.

First, Sears launched a standalone Craftsman website with a linked online store. At the time, I noticed a distinction between the Craftsman brand, and the Sears Blue Tool Crew.

And now? Sears and Ace Hardware launched a trial program where select Ace stores can carry Craftsman products, with all Ace stores being offered the opportunity to carry a limited selection as part of an upcoming Father’s Day event in June.

Then, there are these new tool catalogs, where it looks like Sears is intentionally trying to distance themselves from and minimize their association with Craftsman.

What is all this leading up to? Personally, I think that some sort of standalone Craftsman spinoff is inevitable. Maybe I’m wrong, but you have to admit – there is most definitely something in motion to have prompted this!

The Fall of Sears and Craftsman