ToolGuyd > New Tools > New Craftsman Stacking Tool Chest Storage System
If you buy something through our links, ToolGuyd might earn an affiliate commission. 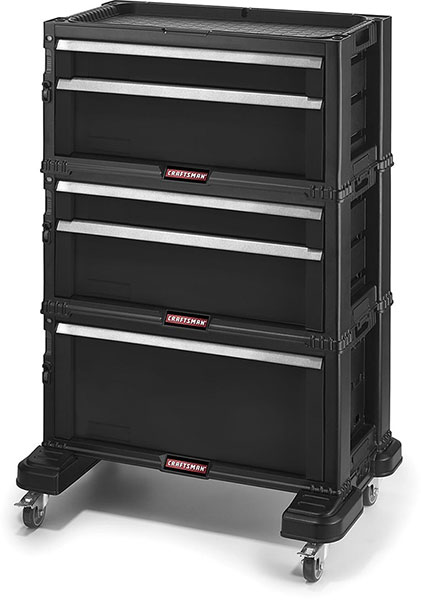 Craftsman has come out with a new modular and stacking tool chest storage system that they say will grow with your needs. We’ve seen something similar before from Keter, but have yet to see a current source. The Keter modular tool box system was previously sold at Sam’s Club. 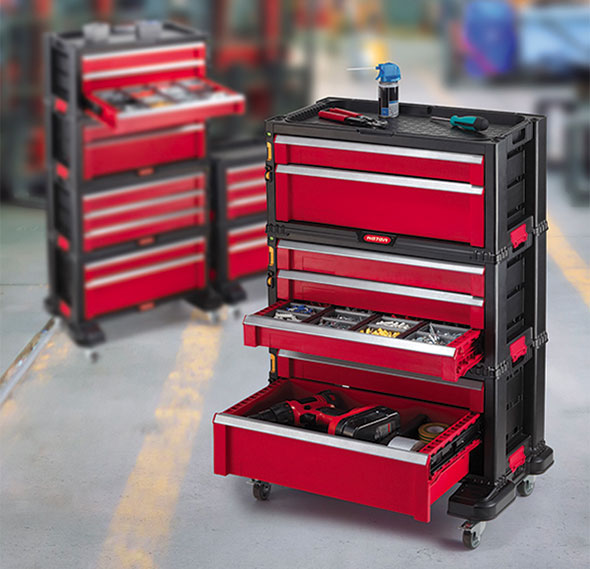 The new Craftsman modular tool storage system ships with 3 tool chest and a rolling base. The tool chests can each be repositioned to any location in the stack, and they lock together at the sides. Each unit also has side carrying handles and a central locking system. Inside, the drawers can be customized with removable dividers, and you also get 32 removable small parts bins.

Additional features include fully extendable drawers, top tool trays that provide a tool catch-all and work surface, and padlock eyelets on each chest for securing their contents.

The chests are made with polypropylene resin construction, except for the drawer slides, which are ball bearing glides. Craftsman says that the units can function under tough conditions without sacrificing appearance, but they’re still going to be better suited for DIY or less intense work environments.

While I’ve been waiting for the Keter modular storage system to finally be available, Sears’ undiscounted price is a little high. Hopefully the price will drop a bit in a couple of weeks – I think that $99 would be a more appealing target.

I would love to see how well system compares with the Ryobi ToolBlox tool storage system, which sadly isn’t available in the USA (yet?). The last I heard, there weren’t even any plans for Ryobi to bring the ToolBlox system to the USA.

The new Craftsman system looks interesting, although I also wish they kept the red and black Keter color scheme.

As I tried to hint at – I think this could be a very appealing storage product for DIYers with light duty storage needs. It’s a product I feel very positive about, but there are some hesitations. On one hand I’m excited that Craftsman is bringing the Keter storage system to market – at least beyond a limited Sam’s Club run. On the other hand, I don’t think Craftsman or Sears is going to maximize its appeal or effectiveness.

The Craftsman configuration looks like it would be better for users with more power tools than hand tools. It’s really not a big deal that it doesn’t come with a 3-drawer chest.

But will Craftsman sell individual or add-on tool chests separately? Will they sell the tool cart configuration shown in Keter’s promo video? Unfortunately, there’s no indication that they will. So this isn’t so much a modular system, as it as a stacking tool chest system. How can it be modular if you cannot customize the setup as you could with other brands’ modular tool storage systems?

I am hopeful that Craftsman might sell add-on or modular chests separately, but if they don’t, then just the 3-chest combo and rolling base as a complete system doesn’t look any less appealing as a compact DIYer tool storage setup.