ToolGuyd > Power Tools > Cordless > Craftsman V20 and Sears Craftsman 20V Cordless Power Tools and Batteries are NOT Compatible
If you buy something through our links, ToolGuyd might earn an affiliate commission. 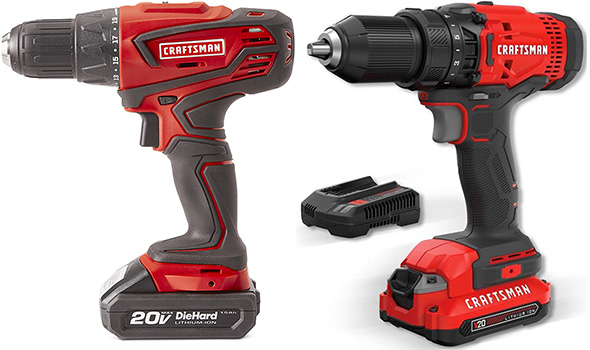 I recently wrote about how I believe there will definitely be confusion between Stanley Black & Decker’s new Craftsman cordless power tools, which will be available at Lowes, and the new Craftsman power tools that Sears is coming out with.

The new Stanley Black & Decker (SBD) Craftsman power tool lineup, as far as I consider them, are the new Craftsman tools, while Sears’ are licensed products, seeing as how SBD now owns the brand.

In addition to the potential confusion just by the fact that there are now V20 and 20V tools with red and black color schemes and Craftsman branding, a reader reported about Sears associates and customer service agents being ill-informed, leading to inaccurate advice that the tools were compatible with Craftsman V20 and Dewalt product platforms.

Although I was nearly certain that the two new lines of Craftsman-branded 20V Max cordless power tools were not at all compatible, I reached out to Craftsman – on the SBD side of things – for confirmation.

Following is what I heard back from Jeff Doehne, General Manager for the Craftsman brand:

Stanley Black & Decker is not supplying Sears with their CRAFTSMAN 20V tools and 20V Diehard batteries. The 20V CRAFTSMAN products that have been released by Sears is not compatible with the new CRAFTSMAN V20 tool lineup that debuted at the brand’s launch event in mid-August.

The V20 lineup can be viewed on CRAFTSMAN.com, and will be available at Lowe’s Home Improvement, Ace Hardware, and on Amazon.com. Furthermore, the new V20 batteries produced by the CRAFTSMAN brand will not be compatible with the 20V products released by Sears.

Earlier today I received a comment in reply to my post about the new Craftsman V20 cordless drills and drivers. Charlie wrote:

A big question for me is: are the SBD V20 batteries plug compatible with the Sears 20V batteries? I.E. Can I buy a SBC V20 and use it on a Sears Craftsman 20V tool and vice versa???? Nobody seems to be asking this….

This is the type of question I have been anticipating, and others like it will only increase in frequency as both Craftsman and Sears promote and advertise their power tools throughout the end of the year.

Craftsman’s response pushed my 99.9% certainty to 100%, and so I can now say with absolute confidence that the two cordless power tool platforms are not at all compatible.

NO, Craftsman V20 and 20V Max cordless power tools, batteries, and chargers, are not cross-platform compatible. To ensure compatibility, stick with the V20 lineup and look for a CMT model number prefix on everything.

New Craftsman 20V Cordless Power Tools! (Including Brushless and Made in USA*)