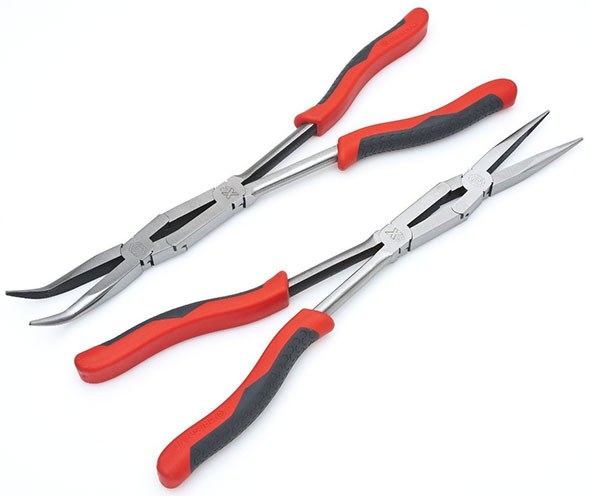 It looks like Crescent’s Double-X long-reach pliers have been rebranded as “X2” pliers. And, it looks like Amazon has made arrangements to offer the 2-piece pliers set for a special ridiculously low price.

Over at the product page (linked below), there is a “clip coupon” button, which when clicked takes 40% off the price. So instead of $30 for the set, you only pay $18. The discounted price is then shown in your cart at checkout.

Right now, the set is listed as being temporarily out of stock, but you can still order it at the special price. You’ll get it once Amazon receives inventory to ship out.

These pliers, like the Crescent and Gearwrench Double-X pliers, have a double-jointed design that lets you reach into tight spaces with minimal handle spread.

You can see my Gearwrench black-handled and Crescent blue-handled Double-X pliers in my long nose pliers discussion post. I bought a Crescent 2-piece set back in 2011 for $20 or $25 during the holiday season, and my Gearwrench pliers back in 2008 for $15 when Sears was having one of their now-rare 40% off sales.

$18 for two of these compound-action long-reach pliers is a heck of a good deal if you ask me.

I don’t reach for my Double-X/X2 pliers that often, but they have pulled me out of tricky situations to have more than paid for themselves.

If you think you might have use for these pliers, buy ’em and try ’em. If you don’t like them, return them.

My feeling is that Amazon is waiting until closer to Black Friday to formally advertise this deal. Don’t wait until then, as they might sell out. $18 is a very good price for what you get. This deal will only be around as long as Amazon has inventory to sell, which might not be very long.

If I didn’t already have these pliers albeit with different handles, I would have ordered one of these sets before writing this post.

If you’re not sure if these will come in handy, then pass on them. There’s no use in buying tools you might not need. But keep in mind that, if you want to buy one later on, you’ll then have to pay more for one Gearwrench Double-X or Crescent X2 plier than you would for this 2-piece set. That’s partly also why I think this is such a good bargain.

Reader Question: Best Pliers? What About Your Favorites?