ToolGuyd > Hand Tools > Plumbing > Crescent X6 Wrench is an Adjustable Wrench, Pipe Wrench, and Pass-Thru Ratchet
If you buy something through our links, ToolGuyd might earn an affiliate commission. 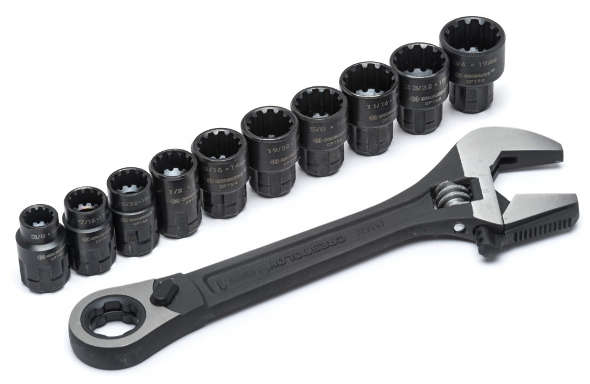 Browsing the aisles of Home Depot, I came across the Crescent X6 Pass-Thru Adjustable Wrench Set (CPTAW8). At first, I really didn’t know what to think of this 3-in-1 socket-adjustable-pipe wrench combo, and honestly I’m still not sure I do.

The Crescent X6 wrench looks like an ordinary adjustable wrench at first, until you notice the jaws and that there is a reversible ratcheting mechanism where you normally see a hanging hole. 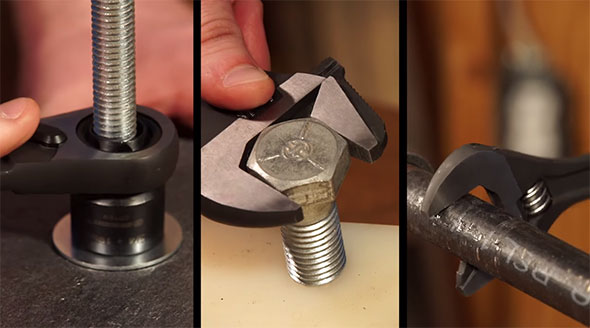 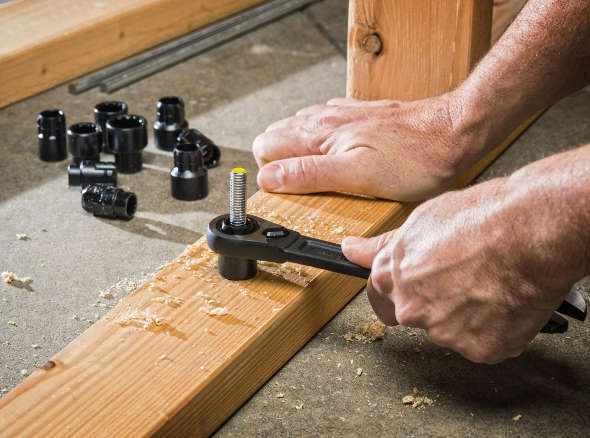 The first thing that stuck me about the wrench was the pass-through ratcheting handle. Crescent also makes a 20pc pass-thru ratchet and socket set ($27 at Amazon, $38 at HD) that features the same design. It’s also worth mentioning that Gearwrench – which like Crescent is owned by Apex Tool Group – offers a full range of pass-thru sockets and accessories that the X6 wrench is probably compatible with.

Crescent claims these pass-thru sockets replace standard and deep well sockets, and that may be true for some uses.

The universal-style sockets fit a bunch of different fasteners, such as square, 6pt, 12pt, E-Torx, and spline. Crescent says they even work on partially rounded (damaged) 6pt fasteners. The sockets also combine standard and metric sizes into one, so you don’t need to carry around as many sockets.

If you really want to use the Crescent X6 wrench with standard square drive sockets, Gearwrench’s adapter (via Amazon) might fit, although there’s no guarantee. Craftsman’s Max Axess square adapter might also work, and if not you could return them to your local Sears store. Bit holders are also available, although 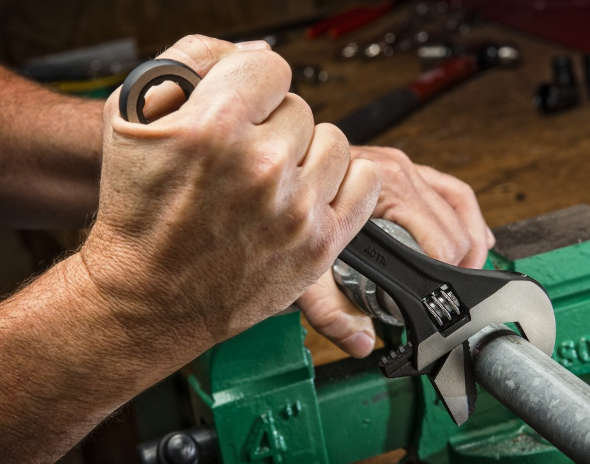 When used as an 8″ adjustable wrench, the jaws open wider than other 8″ adjustable wrenches. In fact, they’ll open so wide the jaw will fall out! That’s a feature, not a flaw, because it allows you to reverse the jaw to create an adjustable pipe wrench, although you’re going to be limited to using it on smaller diameter pipes.

Crescent coats the forged alloy steel wrench in a black phosphate finish for good corrosion resistance. The jaws are laser etched with a standard inch scale on one side and a metric scale on the other. And don’t throw away the packaging, as it can be used to neatly store the wrench and sockets.

Crescent lists the X6 Pass-Thru adjustable wrench set for $50, but you can pick it up at Home Depot for $30.

The following video, with upbeat but fortunately not heavy metal background music, demonstrates the tool in each of its three functions.

What I’m a little more concerned about is the large adjustable wrench head being located right where you would want to grab the handle when using the ratchet function. That might affect how much leverage you could apply with the tool being used as a socket wrench. Also, the large head might make it hard to use this tool as a ratchet in tight spaces.

I also don’t like Crescent saying that their pass-thru system replaces standard and deep wells sockets; I think it’s a little misleading. This isn’t any different from how other brands market their X-in-1 universal and pass-thru drive tools, but that doesn’t change things. Sure, pass-thru sockets will work better than deep well sockets for some uses, such as to access fasteners on very long bolts or threaded rod, and they’ll work fine as standard sockets. But without an extension, which is not included with this set, you’re going to need a different tool for reaching recessed fasteners.

As equipped, with just the main tool and 10 sockets, the X6 wrench set is better described as a complement to a regular socket set, and not a replacement.

There’s also the “universal” dual-size sockets. Some users like them, some hate them. It’s not really the spline profile that’s the issue – although sometimes it is – but how inch and metric sizes are mashed together into a single socket.

A few years ago Stuart investigated how well a Kobalt dogbone-style wrench with universal sockets fit standard hex fasteners. Spoiler: there was a lot of slop. Manufacturers have tightening things up over the years, but you’re not going to get as precise a fit with a universal dual-size spline socket as you would with a standard 6pt socket. Disregarding the dual-size issue for a moment, it’s worth pointing out that a major selling point of spline sockets and wrenches is that they provide a better grip for partially rounded and damaged fasteners.

While this tool might replace an 8″ adjustable wrench, I don’t think it’s going to cut it as your only ratchet or pipe wrench. Still it might be a good tool to drop into a go bag or give to your kids when they get their first apartment.