ToolGuyd > Hand Tools > Bit Holders & Drivers > CRKT Multi-Tool
If you buy something through our links, ToolGuyd might earn an affiliate commission. 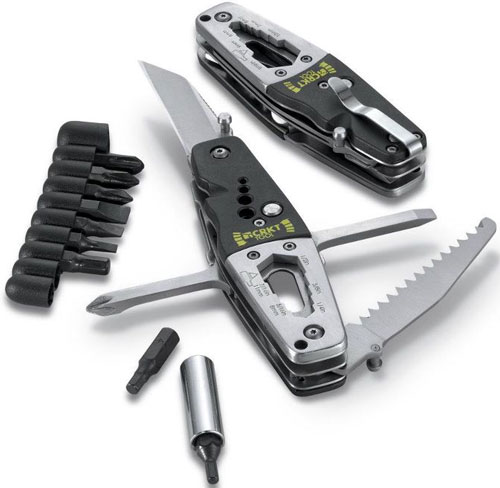 The CRKT Tool 9200 is a new compact multi-tool for everyday carrying (EDC). While it lacks pliers and scissors, the Tool has a fairly strong feature set that makes it a nice almost minimalist tool. Designed by knifemakers Ed Van and Tom Stokes, the CRKT Tool has a clean and stylish appearance and is probably better described as a bonus-featured pocket knife than a multi-tool.

From the looks of it, the bit driver probably fits over the Phillips or slotted screwdrivers and accepts standard 1/4″ hex bits. The bits store away in a black plastic sleeve, which pops into the back pocket of the included sheath.

The CRKT Tool weighs 5.1 ounces by itself, and is a very pocketable 4-inches long when closed. MSRP is $50. No release date has been announced, but we see that the Tool is coming soon.