ToolGuyd > Power Tools > Cordless > Spotted in the Wild: Dewalt 12V 2.0Ah Battery Pack
If you buy something through our links, ToolGuyd might earn an affiliate commission. 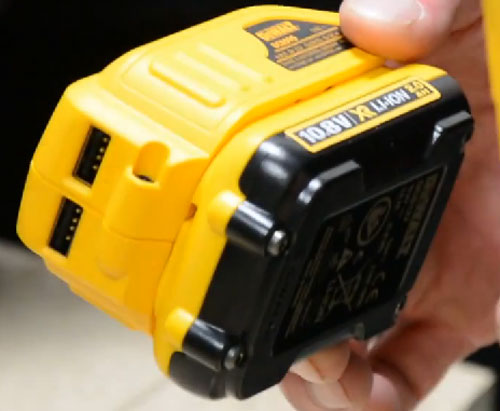 Yesterday, in a comment to our post about the new Bosch 18V 5.0Ah battery, Cody mentioned having spotted a Dewalt 12V Max/10.8V 2.0Ah battery pack.

We did a bit of digging, and saw that Dewalt has a few D2 cordless kit product pages that reference a new 2.0Ah battery pack. Dewalt’s current 12V Max and 10.8V cordless kits have S1 and S2 prefixes and come with 1.5Ah batteries, but following the convention used with their 18V kits, the D2 prefix is used to convey that a kit comes bundled with two 2.0Ah batteries.

Additionally, we caught a glimpse of the 2.0Ah battery pack in a video by ITS, a UK-based distributor, where they discuss Dewalt’s USB power adapter (the same one that is bundled with Dewalt heated jackets). You can get a good look at the battery pack at the ~2-minute mark.

(In the image, the battery pack is shown attached to the USB charger.)

Since it’s not very nice to grab the image without showing the video, here’s ITS’s video of the DCB090 USB charger:

While we’re happy to see Dewalt come out with a higher capacity 2.0Ah Lithium-ion battery, we’re also hoping to see a new 4.0Ah battery pack. Not because we want the extra runtime, but because a potential 4.0Ah battery pack would open the door to further 12V Max and 10.8V product line expansion. How about a circular saw? Band saw? Rotary hammer? Milwaukee currently leads the 12V-class cordless tool market by a huge margin, but Dewalt certainly has the potential to catch up if they really wanted to. A 12V-class 4.0Ah battery pack might help start the process.

The seemingly late release does make us a little curious. Why now and not a year ago when the 20V Max/18V 2.0Ah and 4.0Ah were released?

Note: 12V Max and 10.8V is the same thing. Dewalt 12V Max tools operate at a nominal voltage of 10.8V. The difference is only in how the tools are labeled and marketed in North America vs. in Europe and the rest of the world.

Right now we have no information as to when the new battery pack might be released in the USA. All of the information we’ve seen indicates that it is at least coming to the UK and Europe soon. 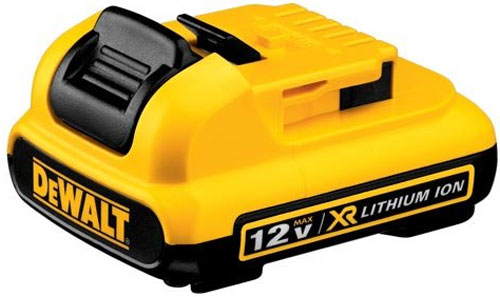 Update: A pre-order page for the 2-battery bundle has just been added to Amazon, indicating that the 12V Max XR 2.0Ah Li-ion battery packs will be coming to the USA.