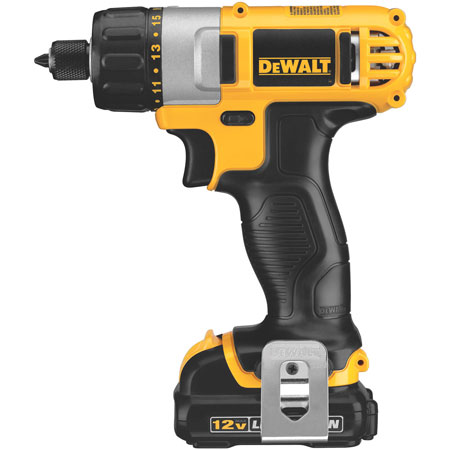 Of the seven tools Dewalt will introduce as part of their new 12V MAX lithium ion cordless line this fall, the most demanded tool will probably be the cordless screwdriver (DCF610S2) due to its small size and user-friendly features. Dewalt designed the screwdriver to be compact yet powerful enough to handle the intense fastening demands of professionals.

Not only does the cordless driver pack a powerful punch and impressive runtime in a compact and lightweight frame, it features a number of handy features that distinguish it from the competition. 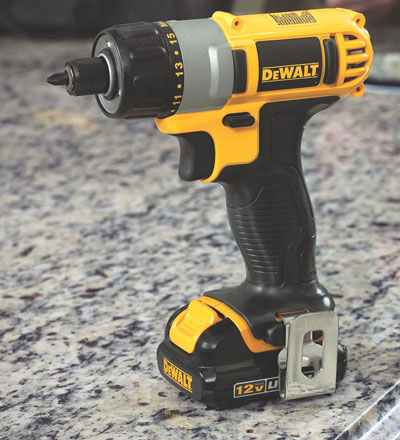 First off, I LOVE the idea of the one-handed chuck. Pop a bit in, and it locks into place without any twisting, turning, pulling, or tightening. One-handed bit removal should also be possible.

It seemed strange that Dewalt only gave the tool a single speed setting when 2-speed tools are all the rage these days. After a brief chat with a Dewalt product manager, I understood their rationale. The speed control in the trigger is non-linear, meaning that slight squeezes will offer users great control of lower speeds. Depress the trigger a bit further, and the speed starts to ramp up quicker.

The cordless screwdriver is indeed quite compact, but it doesn’t quite match the shortness of Bosch’s new PS21-2A Pocket Driver, which is currently the most compact compact cordless driver on the market today. However, the battery placement of Dewalt’s driver may very well make the tool more comfortable and balanced to hold and work with.