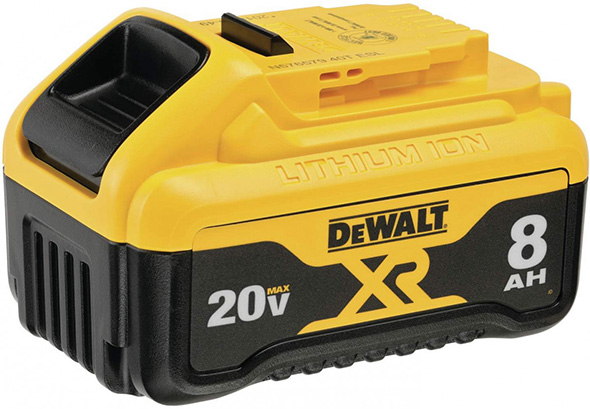 Let’s take a look at the cost breakdown.

Over at Amazon, the DCB206 6.0Ah battery pack is currently $129 for one, or $179 for the 2-pack. Some sellers are offering the single battery for less (as low as $100), but for the sake of consistency I’m using the Amazon-direct list pricing.

So, what this all means is that the new Dewalt DCB208 20V Max Li-ion battery cost more, but their cost is roughly proportional to the charge capacity you get. The 6.0Ah battery pack, with a lower cost per amp-hour, provides a little more bang for the buck.

The new Dewalt DCB208 battery is the same size as the 6.0Ah, giving you a bump-up in runtime at no added size or weight. Both the DCB206 and DCB208 batteries feature the latest Li-ion battery cell technology, which allow them to run a little cooler than the smaller high capacity battery packs with 3.0Ah, 4.0Ah, and 5.0Ah capacities.

Compared to the DCB205 5.0Ah battery, you might see a little better runtime or performance in high-demand applications, but this is in theory and not something we have thoroughly checked out yet. However, Dewalt’s heaviest duty cordless power tools are found in their FlexVolt 60V Max and 120V Max lineups. With the heaviest duty 20V Max cordless power tools designed around the cell technology found in the 18650-based battery packs, with 1.5Ah to 5.0Ah charge capacities, there is likely minimal performance benefits in stepping up to the 6.0Ah and 8.0Ah batteries. There shouldn’t be any noticeable differences in less demanding applications.

What I’m trying to say is that I don’t believe there are going to be measurable performance differences if choosing the new 8.0Ah battery over say a 4.0Ah or 5.0Ah battery.

The main selling point here is that you get much longer runtime. Compared to a 4.0Ah battery you get double the charge capacity, and 60% more than with the 5.0Ah battery.

If you want longer runtime, and are willing to accommodate a slightly larger battery pack, the 8.0Ah should be a good upgrade or replacement.

As it’s a 10-cell pack, the 8.0Ah battery is going to be smaller and lighter than the 15-cell FlexVolt 9.0Ah battery, which as a reminder can work with FlexVolt or 20V Max cordless power tools. There’s also the FlexVolt 12.0Ah battery.

The FlexVolt 9.0Ah 2-pack is currently on sale for $249 at Tool Nut, which is the same price as the 20V Max 8.0Ah 2-pack. So, you get more charge capacity for your money with the FlexVolt batteries – a combined 18.0Ah vs. 16.0Ah, and you can use those batteries in 20V Max or FlexVolt cordless power tools. But, if used with small and mid-sized 20V Max cordless power tools exclusively, the added size of the 9.0Ah batteries due to the greater number of Li-ion cells (15 vs. 10 for the 8.0Ah battery) will be a hindrance.

I think that the new 8.0Ah battery will be a good fit for all but the smallest and lightest Dewalt 20V Max cordless power tools. Tools like their impact drivers, compact drills, and smaller worklights are better paired with smaller battery packs. You could use this battery in all those tools, but it’s not quite idea. If it’s a tool that is often kitted with a compact battery, such as a 5-cell 1.5Ah or 2.0Ah battery, the size and weight of the 8.0Ah might imbalance things a little.