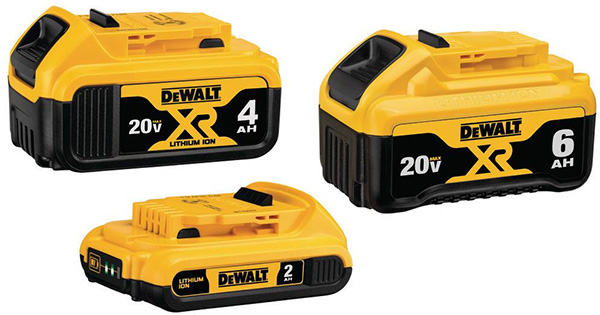 There are lots of reasons why you might have to buy new batteries, whether you’re looking for longer runtime, the ability to operate several tools without having to swap batteries back and forth, or maybe it’s time replace aged battery packs.

Batteries do wear out and are considered consumables after all.

Greg wanted to know if it’s a good deal:

Since this is a rather unique combo pack deal, it’s hard to compare it against past deals. So, I decided to take a look at other current pricing examples.

Additionally, Home Depot looks to be the only store stocking this particular battery bundle, DCB346-3.

Here, I’ll analyze the value of this deal to the best of my ability.

Thus, the best pricing you could find on a 2Ah, 4Ah, and 6Ah battery bundle right now would be half of that, or $171, assuming you split it with a friend or similar.

For the sake of simplicity, let’s forget about all context and just look at price per amp-hour or charge capacity.

I think this is a very good deal.

These are not Dewalt’s highest capacity 20V Max cordless power tool batteries. However, their 8Ah battery is $145 and up by itself.

It’s not a very apples-to-apples comparison, but is as close as possible.

This is the best Dewalt battery deal we’ve come across for Black Friday 2020 so far. There’s always the chance of a deal on 5Ah batteries, but there’s now way to predict that. But, hopefully you’ll find this post helpful in your research and shopping efforts.

If You Don’t Need All That…

As Dewalt puts it simply, this compact 3Ah battery is lighter and shorter than their DCB200 3Ah battery, but still manages to deliver the same runtime and power.

With these being built with larger Li-ion cells than the 2Ah battery pack, it’s going to be a little larger than Dewalt’s lower capacity compact batteries. The compromise can be worth it – while slightly larger in place of a 1.5Ah or 2Ah capacity battery, you get longer runtime. Plus, you can also use this on heavier duty Dewalt tools, such as saws, although don’t forget you’re only getting 3Ah or charge capacity.

If you want the smallest and lightest compact battery possible, the 2Ah will be the better choice over the compact 3Ah. The 3Ah wins favor if you want longer runtime in a compact package and also the ability to use it with higher power tools that are not typically paired with the compact 1.5Ah and 2.0Ah batteries.

Big Richard (thank you!) also found a deal at CPO Tools (and others but they’re out of stock) – buy (2) select batteries – such as the FlexVolt 12Ah battery, get a free bare tool, battery, or charger.

Add 2 qualifying items to your cart, and they’ll present a couple of “free gift” options, including a 5Ah battery 2-pack or 8Ah battery, among other choices.