ToolGuyd > Power Tools > Cordless > New Dewalt 20V Cordless Band Saw
If you buy something through our links, ToolGuyd might earn an affiliate commission. 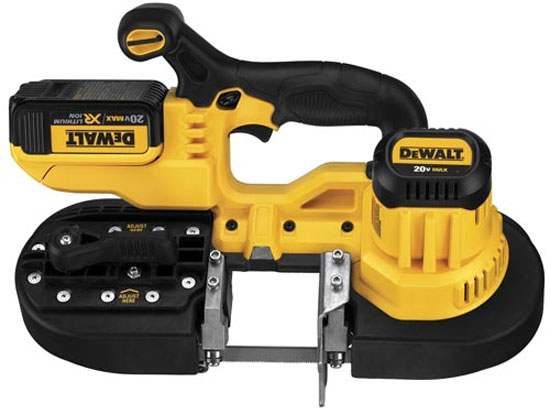 We posted about the new Dewalt DCS371 20V band saw a few months ago, and it looks like the saw is about ready to hit the market. The technical specifications remain unchanged, but there are a few added details worth looking at.

The new DCS371 cordless band saw is designed for professionals in the electrical, mechanical, and HVAC industries, and others who often cut conduit, pipe, Unistrut, threaded rod, and other metallic materials up to 2-1/2″ in diameter.

Dewalt press materials say that the DCS371 band saw was designed with the motor and battery connection on opposite ends of the tool for better balance. This allows the tool to do the work and aids the user in making straight cuts.

The kit comes with the saw, a 4.0Ah Li-ion battery pack, and charger.

ETA: Jan 2014 (which means the saw should be popping up at Dewalt dealers any day now)

Home Depot is offering special pricing on the DCS371M1 kit. You can buy the 1-battery kit for $329, and it also comes with a free bonus battery pack. At the time of this posting, Home Depot lists the kit as “online online” and also “out of stock online,” which typically means they don’t yet have the product in stock and that you should check back soon.

It has been more than two years since Dewalt first launched their 20V Max line of cordless power tools. Although a lot of Dewalt users – especially early adopters – have been disappointed at the rate at which new tools have been released, the stretched-out release schedule means that Dewalt has had plenty of time to engineer a generation of fresh new tools.

At first take, there is nothing unappealing about the new Dewalt band saw, but there is also nothing to raise it above competing models.

It looks like the DCS371 was very closely modeled from Dewalt’s 18V band saw, model DCS370. There are a few differences, such as with the battery connection, primary handle grip, auxiliary handle, and the addition of an LED work light, but other than that the tools are quite similar in form and function.

That’s not necessarily a bad thing, as the DCS370 has been positively reviewed by users, but why did it take so long for Dewalt to add a band saw to their 20V line up?