ToolGuyd > Power Tools > Cordless > Dewalt 20V Max LED Worlight and Batteries Bundle (12/1/19)
If you buy something through our links, ToolGuyd might earn an affiliate commission. 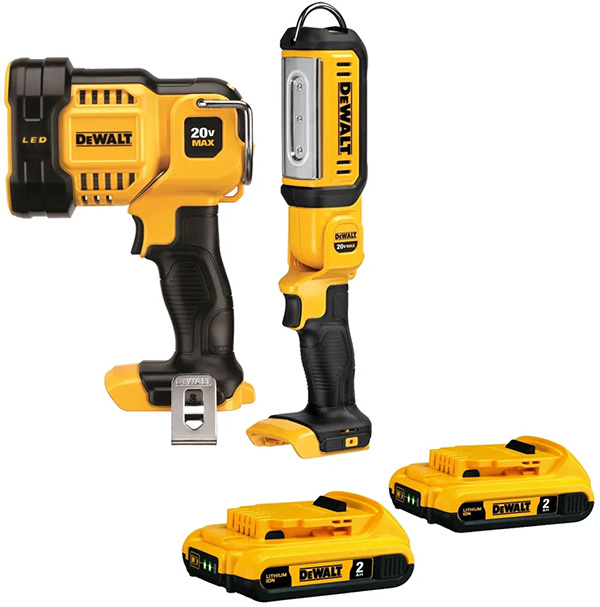 Over at Acme Tools, their Black Friday/Thanksgiving weekend deals are still going strong. I took a fresh look to see if there were any especially good deals I missed, and this Dewalt 20V Max LED worklight and battery bundle caught my attention as a really good deal!

Here’s how I’m choosing to see this deal. I really like the Dewalt DCL043 spotlight, despite early reservations. That worklight/spotlight is $79. Batteries are $74. So this deal is $114 for batteries I could use with other Dewalt 20V Max cordless power tools, an LED worklight, and the DCL050 which might still be useful, I’d consider that a bonus.

Personally, I’d buy the DCL043, which is the brighter pivoting head spotlight. The DCL050? I’d use it, but I don’t know if I’d pay for one, given my particular needs and the other area worklights I have available. That’s why I’d consider it a bonus.

I’d like to see more deals like this. I recognize it’s pretty much aimed at existing Dewalt users, but that’s not a bad thing. There are a lot of deals aimed at getting users into a cordless power tool system, and not enough bare tool and tool plus battery bundles for those already invested in a particular system.