ToolGuyd > Power Tools > Cordless > What’s up With Dewalt’s 2x 5.0Ah Battery Pack Pricing?
If you buy something through our links, ToolGuyd might earn an affiliate commission. 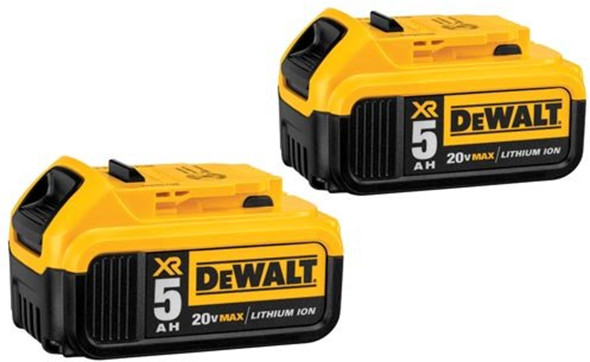 Bill, in a comment, asked about why the price on Dewalt’s 20V Max 5Ah 2-pack increased in price over at Amazon. Here’s the Amazon product page, where the price is currently $199.

Update: The price dropped back down to $159 today.

$199 doesn’t seem so bad when you consider that a single battery retails for $139 at Amazon and other authorized dealers. One Amazon seller has them for $119 each, but it’s unclear as to why their price is lower than the higher typical retail price.

Can you or anyone tell me why, just two months ago, you could by a set of two of these 5.0Ah batteries for $149 on Amazon and other sites?

The set of two is now $199, an overnight increase of 33%, and I have not seen a similar price jump with other Dewalt batteries or other brands for that matter during this same period.

I can’t tell you why the price increase happened, but I can share some of my best guesses.

To start off, let me ask you this – did the price increase or did a promo price end? Although the result is the same, the context is important here. As far as I can tell, $199 is the official suggested retail price, as that’s how much authorized dealers are currently selling it for.

I do remember seeing lower prices for the double pack of 5Ah batteries. So why the increase?

Don’t forget that each of these 5Ah battery packs holds 10 Li-ion battery cells.

But I don’t think this is the case.

The price might be lower in some seasons and higher in others. Maybe demand is high now and supply low, and so ending promo pricing is Dewalt’s way of stabilizing things.

Why wouldn’t Dewalt want to sell out now? The holidays are coming up. Someone that buys a 2-pack of batteries in November or December might spend more on other Dewalt tools and accessories, than if they were to buy the batteries now.

Maybe Dewalt wants to make their tool kits look more attractive, although there aren’t very many “P2” kits that come with (2) 5.0Ah Li-ion battery packs. Or maybe there’s a drop in supply because they’re shipping out a higher number of such tool kits to suppliers in anticipation of higher holiday sales.

Don’t get me wrong, it sucks when things like this happen, especially when you need or want to buy the product.

Why is the price higher now? To answer that, we should also ask: why was the price lower before?

I’m sure Dewalt and their dealer network have good reasons for ending (or maybe halting) a long-running promo and increasing the price on the 2-battery kit. That won’t make any end-users happy, but if you need these batteries now, the $199 price is still better than buying 2 at $119-$139 each.

Back in July, I reviewed my Dell 34-inch curved computer monitor. It launched at $1100-1200 or so, and I bought it at a steal – $992 plus tax. Then, when I wrote the review, it had dropped to $810. I thought it was a great price, and part of the reason I wrote about it was because doing so made me feel better about spending more.

The price of the monitor went back up for a while. When I checked just now, the price was $756.98. While a bit unhappy that I paid so much more, I did get more than 6 months of use.

So why the lower price now? Presumably because there’s somewhat lower demand and greater supply. Some of the manufacturing equipment, if any new specialty machinery was required, is more paid off now with more units than when the monitor initially launched. That could lead to lower costs.

But the price might jump back up. Power tool prices and promotions are usually more predictable than technology products, but that doesn’t make them immune from serious pricing fluctuations.

If you need Dewalt 20V Max 5Ah batteries now, and can handle the higher price, go ahead and buy them. If the price drops substantially within 30 days, buy a new pack and return the higher-priced one. Or you can request a price adjustment, which Amazon customer service reps don’t seem to like doing these days.

Amazon wouldn’t give me a price adjustment on something I once bought right before a $50 price drop, but they said I could return it. You have to eat the return shipping, which is less that you will pay if you use an Amazon-paid shipping label. They’ll then deduct the cost from your refund. Return the new-in-box batteries to avoid having to pay a restocking fee. You *probably* (check the return policy or ask them yourself to be sure) won’t have to pay restocking fee.

Or… add it to your cart or wishlist and check back in a couple of weeks to see if the price changed at all.

What do you think – is there another possible explanation?