ToolGuyd > Power Tools > Cordless > Have You Had Problems with Your Dewalt 20V Max Battery’s Fuel Gauge?
If you buy something through our links, ToolGuyd might earn an affiliate commission. 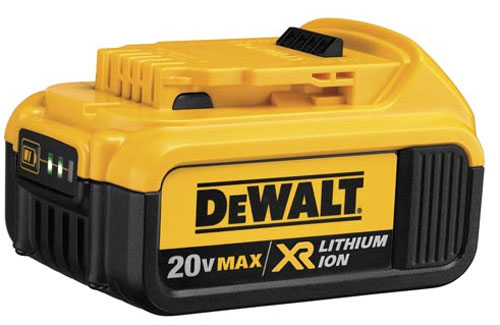 Bill wrote in, describing a problem with the fuel gauge on the Dewalt 4.0Ah battery packs he received with a new kit.

He had purchased a DCK299M2 premium brushless hammer drill and impact driver kit (Amazon link for details), and the fuel gauges on one of the two batteries never fully lit up.

The charge capacity gauge on these battery packs has 3 LEDs to show you how much juice is left in the pack. In Bill’s experience, even when fully charged only 2 spots lit up. He left the battery to charge further, and that 3rd spot never lit up. His other battery charged fine and the gauge lit to the 3rd position.

He returned the kit to the store, exchanging it for a replacement.

Both batteries in the replacement kit suffered from the same issue, where only 2 out of 3 of the batteries’ fuel gauge would light up.

Is this something you have experienced?

I’m thinking there are 3 possibilities:

I haven’t heard about this issue before, and so I’m assuming it’s a random and isolated one that affects maybe a handful of battery packs produced around the same time.

The reader hadn’t done any testing with the batteries to see whether he was getting full charge out of them, which I guess could be done by depleting the battery in use and then timing the recharge.

I’ll ask Dewalt about whether this is something they know about, but also wanted to hear from you guys to see if it’s a random and isolated issue or not.