ToolGuyd > Power Tools > Saws > Review: Dewalt 20V Max Brushless Chainsaw, and How I Was Wrong About it
If you buy something through our links, ToolGuyd might earn an affiliate commission. 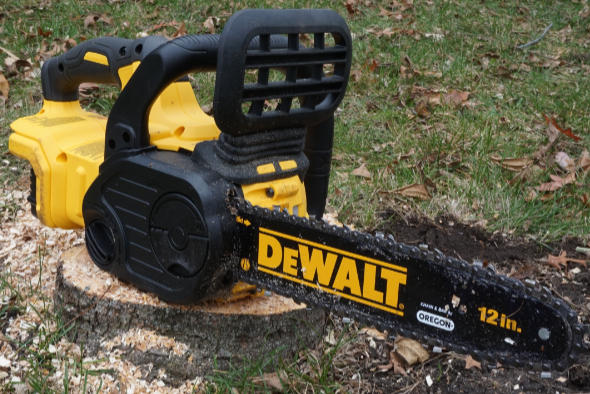 Back in September I wrote a preview of Dewalt’s new 20V Max Brushless Chainsaw. While I hadn’t actually used it, I had played with a bare tool at Acme Tool and it didn’t impress me.

I had two beefs with the design. The first was the levers on the knobs, they seemed flimsy — and I still stand behind that criticism. The second was when I picked the saw up, it just didn’t feel like a quality tool. In my defense, I was very clear that I had never used the saw and that those were my initial impressions.

Dewalt contacted us after the post went live. They were concerned about my opinion and offered to send out a review sample, but I declined, as I felt very uncomfortable with the idea. I felt that, if they sent me one to review and it honestly changed my mind, it could end up looking very suspicious.

*This still doesn’t remove all the bias, because I just traded one potential form of bias for another. Since I purchased this myself, it is possible that I will want to justify spending the money and thus try to convince myself the saw is better than it is.

As I said in the previous post, I had intended on buying this saw because I needed a chainsaw for some yard work and really didn’t feel like spending the time trying to diagnose why my gas chainsaw was having issues. So I decided that I would buy the saw anyway and give it an honest try.

Before I get to my experiences using the saw, I’ll give a very quick summary of the features. 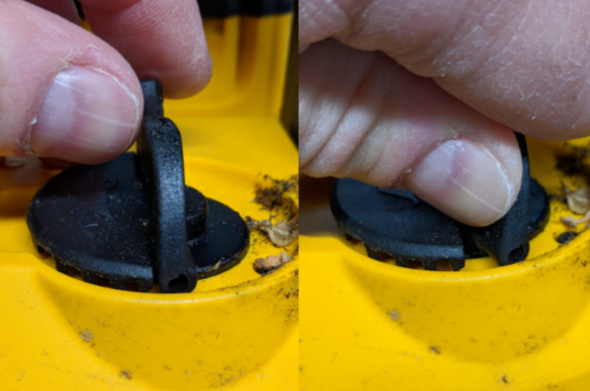 The first thing you need to do when you take the saw out of the box is fill it with bar and chain oil. The bare tool didn’t come with any, but luckily I have a lifetime (for me anyway) supply of all-season bar and chain oil.

Lifting the lever and twisting off the chain oil cap still bothers me on this saw. I still think there is way too much flex, but I ignored that and filled the reservoir so I could get to cutting. 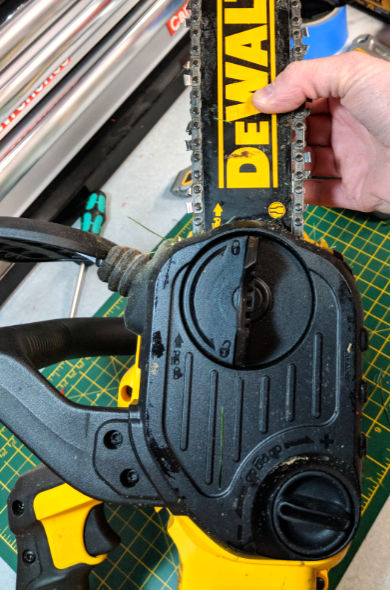 Then you need to adjust the chain tension. The manual says:

The tension is correct when the chain snaps back after being pulled 1/8″ (3 mm) away from the guide bar with light force from the index finger and thumb.

Surprisingly, the chain tension was adjusted correctly out of the box. After using the chainsaw for a while I did need to tighten the chain though.

Adjusting the chain tension is tool-less, you simply unlock the bar, and adjust the locking knob by lifting the lever and spinning it one turn counter-clockwise. Then you just turn the smaller tensioning knob clockwise until you have the proper tension. Finally, you retighten the bar adjust locking knob. 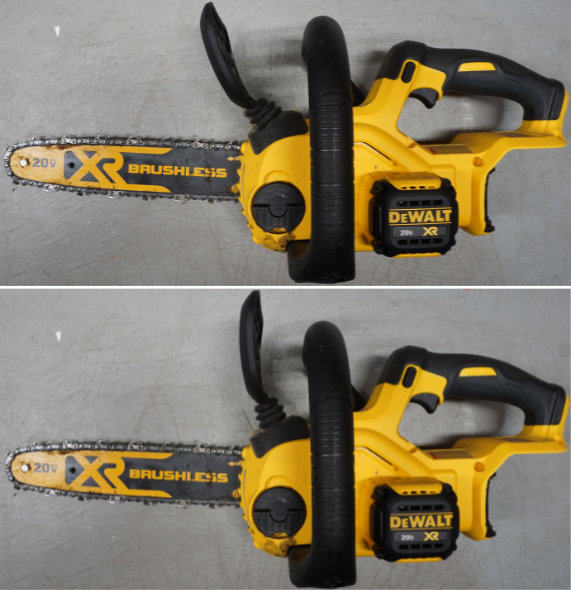 Before I started in cutting down a tree, I set up a 6″ wet walnut log in a Jawhorse and cut a few cookies, just to get a feel of the saw’s capabilities.

Having used both gas and plug-in chainsaws, I was expecting the Dewalt 20V Max Chainsaw to perform somewhere in the middle, or less powerful than a gas saw but more powerful than a plug-in electric saw. That’s pretty much the performance I got.

The whole reason I needed a chainsaw was than I needed to take down a dying maple tree by the side of our house. It wasn’t a large tree, but it’s about 10″ around at the base — a perfect test for a 12″ chainsaw.

I started by climbing up a step ladder with the chainsaw to cut most of the limbs off the tree. Then I cut off the top of the tree and removed the rest of the limbs. Next I cut through the base of the tree. Finally I cut the trunk into chunks so I could easily carry it away.

The lightness of this saw is really noticeable when you are up on a ladder. It’s easy to maneuver and isn’t tiring to use at all. It also had no problem cutting through any of the upper limbs or the top of the tree.

Cutting through the 10″ base of the tree was a little taxing on the saw. You can see in the video it took me about 40 seconds. It wasn’t bogging down, but I wouldn’t want to do this all day.

Finally I needed to cut up this hollow core door to fit it into the trash. After I did some filming about the new Milwaukee M18 Fuel Hackzall, I ripped up the rest of the door with the Dewalt 20V Max chainsaw.

Cutting apart the door really didn’t challenge the chainsaw that much, but it was fun. It’s about the quickest way to turn a hollow core door into garbage and does show that you can use the chainsaw for light demo work.

Back to the issues I didn’t like in my preview article, I’ll show the photo of the fill cap again. You can see how much the lever flexes before the oil cap starts to loosen. It’s not a matter of the oil cap being too tight, because it’s not a screw it’s a twist lock. You need to apply that much force to overcome the lock.

Alright, I still think the lever on the oil cap is a poor design, but with the performance of the saw, I can let it slide. Let’s talk about my other issue:

You know how when you pick up a tool it either feels right or it doesn’t? This saw just didn’t feel like something I wanted to spend my money on. I really have a hard time putting into words what I didn’t like about the body of the saw, so I’ll use an analogy. I’d say it’s like picking up a $99 DCD771 holiday special drill kit, rather than a high-end DCD796 hammer drill.

I’m just going to say it: I was wrong about this. I think part of the issue is the weight of the saw. It’s a light saw, so light that it almost feels like a toy. When I was in the store, I picked up the bare tool and not a tool with a battery in it.

I think the Dewalt 20V Max Chainsaw is probably a fine tool for a homeowner or a lawn care professional that doesn’t want to deal with a gas chainsaw and doesn’t have to regularly cut through trees and branches thicker than 8″. I did show that it can cut up to 10″, but it does so pretty slowly — probably slow enough that you’d be more productive with a Dewalt FlexVolt chainsaw or even a small gas saw.