ToolGuyd > Power Tools > Cordless > Dewalt 20V Max Brushless Chainsaw
If you buy something through our links, ToolGuyd might earn an affiliate commission. 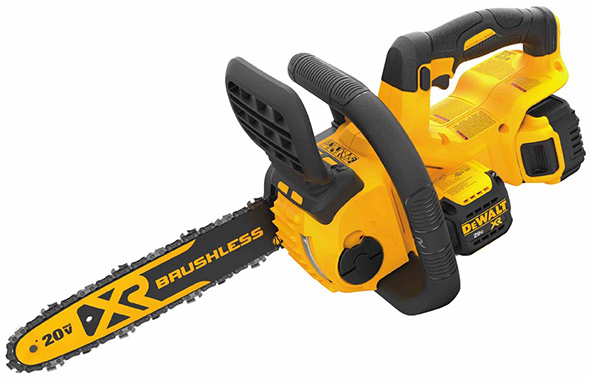 One new product left out of the Dewalt Experience Media Event was the 20V Max compact cordless chainsaw. It has been hitting stores recently and we’ve had numerous people inquire about it.

Dewalt says that their new brushless chainsaw was designed for construction applications, such as cutting beams, roughing-out openings, and demolition work. It can also be used for tree work, with the manual saying it can handle logs up to 10″ in diameter.

The saw uses a 12″ Oregon bar and chain, which Dewalt touts as being low kick-back. The chain can be tensioned without tools using the bar locking and chain tensioning knobs on the right side of the saw.

The saw weighs 7.6 lbs without a battery and 8.8 lbs with the 5.0 Ah battery installed.

Dewalt says it can make up to 90 cuts in pressure-treated 4×4 pine wood, when paired with a 5.0Ah battery pack. 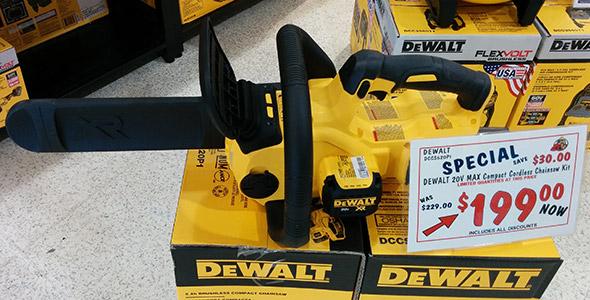 These are the online prices, but I believe they are the same in store. The in-store flyer says the prices are good until the end of the month (Sept 30th, 2017). 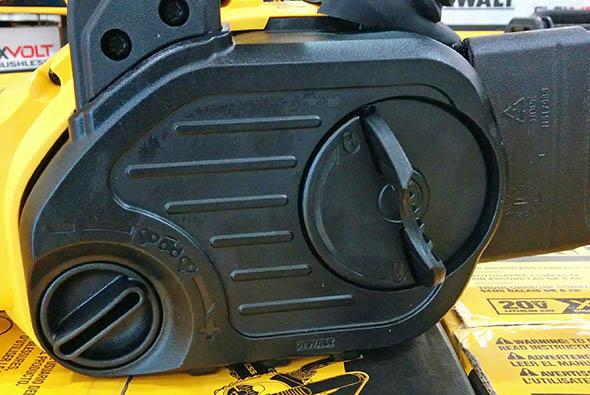 I traveled to Acme Tools last weeks with every intention of buying this chainsaw. My trusty 14″ Stihl chainsaw needs some TLC to get running, and as a homeowner who uses his chainsaw a few times a year, I basically have to “winterize” it every time I run it. Otherwise I end up leaving gas sitting in it for 6 months. So the thought of a chainsaw where I don’t have to deal with mixing gas seems appealing for my usage. 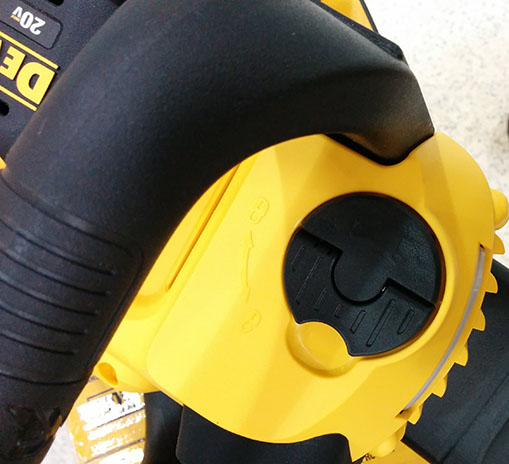 As mentioned, I intended on buying this saw, but after handing the floor model I became hesitant. I was playing with the bar locking knob and the chain oil cap, which both have these flip-up levers to help turn them. I was really put off by how much the plastic levers bent as I tried to turn the knobs. I felt like I was going to break the lever on the oil fill cap right off.

Going back and looking at the Flexvolt chainsaw I notice that it also has these same flip-up levers as the 20V saw. I cut a beam with that saw at the Dewalt 2016 event and that saw felt like the real deal, but I never messed with the adjustments or oil cap on that saw.

That wasn’t the only thing I didn’t like. You know how when you pick up a tool it either feels right or it doesn’t? This saw just didn’t feel like something I wanted to spend my money on. I really have a hard time putting into words what I didn’t like about the body of the saw, so I’ll use an analogy. I’d say it’s like picking up a $99 DCD771 holiday special drill kit, rather than a high-end DCD796 hammer drill.

Keep in mind that these are only my initial impressions — I haven’t actually used this saw. I could be completely wrong and this could turn out to be a real powerhouse with a few cosmetic problems.

Stuart’s Note: I have been thinking about how the 20V Max cordless chainsaw fits in with Dewalt’s other offerings. The press release mentions its 20V Max compatibility, allowing anyone who has already bought into the battery platform to add this chainsaw to their repertoire without having to buy into a whole new system. There’s also mention in the press release of it being “ideal for indoor cutting and demolition applications.” If you want more power and runtime, the FlexVolt saw is probably worth investing in, or the 40V Max version for even more serious use. This 20V Max cordless chainsaw? It’s more about convenience.

Have you ever used or thought about using a chainsaw indoors, for demo work or any construction tasks?