ToolGuyd > Compressors, Air Tools, Nailers > New Dewalt 27 Gallon Air Compressor
If you buy something through our links, ToolGuyd might earn an affiliate commission. 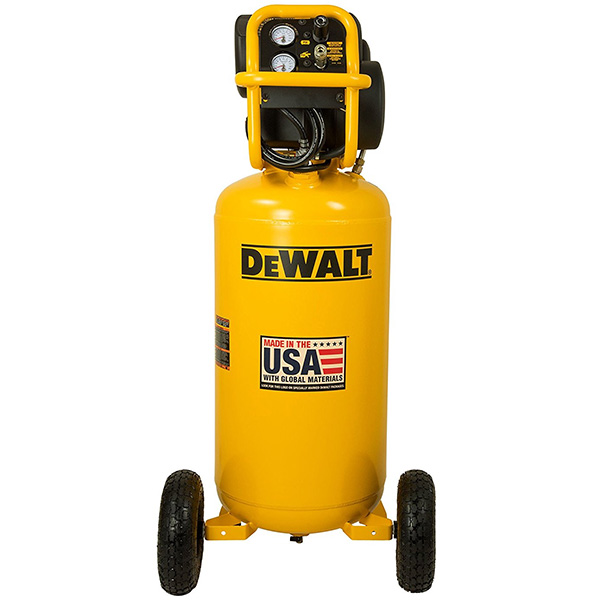 A few months ago, a new Dewalt air compressor popped up on Amazon, and it looked interesting, but was too close in price to a larger and higher performance 30 gallon model.

It’s also said to be made in the USA, with global materials.

AND, when checking my Amazon wishlist for something else, I saw that it dropped in price, to $435. This seems to be its “regular” price now. It’s said to usually ship within 3 to 5 days.

It’s a little higher at Home Depot – $457, and currently out of stock.

Initially, I was wondering what’s so great about this new vertical air compressor, but its feature set is growing on me.

It has a low volt start, which Dewalt says allows it to operate on a long extension cord, a high flow regulator, higher maximum pressure than other similarly sized compressors, and its noise level is rated at 78 dBa, which seems awfully quiet for an oil-free model.

It doesn’t push out as much air as the 30 gallon model mentioned and linked-to at the start of the post, but its other features seem to make up for that.

Thanks to the 200 PSI rating, Dewalt says that their new 27 gallon compressor will run air tools for 3X longer than typical 26 gallon oil-free air compressors with direct drive induction motors. And because it has a 78 dBa noise rating, it’s probably significantly less noisy when the compressor starts to cycle.