ToolGuyd > New Tools > New Dewalt 2x20V Max Brushless Mower
If you buy something through our links, ToolGuyd might earn an affiliate commission.

At the Dewalt Experience 2017 media event, they quietly introduced the new 2 x 20V Max brushless lawn mower. When I say quietly, I mean it was there one minute and gone the next with no trace or mention. Between the press release and added details we asked Dewalt about, we now have a better picture of this mower.

The press release says the new mower uses 2 batteries which work simultaneously to deliver power to the high-efficiency brushless motor. Dewalt clarified this by saying that the batteries are in series, which would effectively make this a 40V mower. They didn’t want people to confuse this mower with their 40v Max line — thus the 2 x 20V Max labeling.

The mower has three options for dealing with grass clippings: it can mulch, discharge, or bag the grass in the included 50 L rear bag. We don’t have a photo of it, but Dewalt says that if you want to discharge the grass, “the rear door props up slightly to allow the grass to be spewed out in rear.” 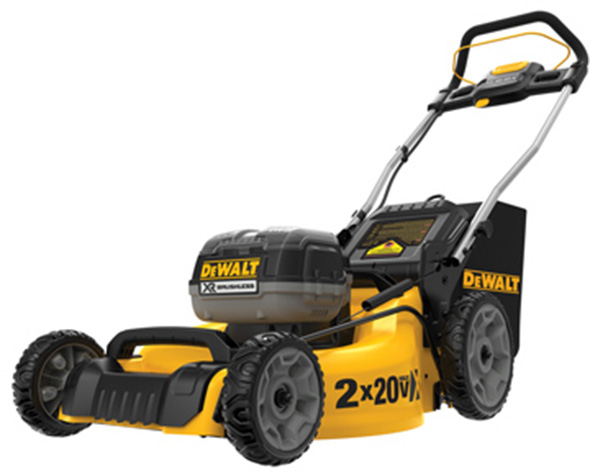 The mower has a 20″ metal deck and a folding handle which allows it to be stored upright. It also features front and back carrying handles.

The mower is not self-propelled, but Dewalt says that its ball bearing wheels, 60 pound weight, and large rear tires will make it easy to push and maneuver. 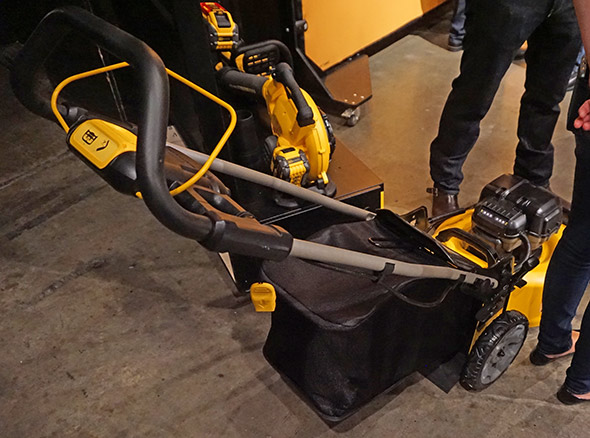 An LED display shows you the state of your batteries and will let you know when you need to recharge them. In the photo above, I believe those white rectangles on the top rear of the “engine” are the battery charge level indicators.

Dewalt expects to start shipping the mower in early 2018. For $399 you’ll get the mower (DCMW220), 50 L rear bag, a single battery port charger (DCB115), and two 5 Ah batteries (DCB205). It has been confirmed that FlexVolt batteries are compatible with the mower.

I was puzzled by the plastic area on the front of the mower, where there’s a two-position slide switch, I though maybe this was the discharge. When I asked Dewalt, they said that the photographs show a prototype, with the final version missing the switch in the front. Furthermore, the mower will discharge out the back by propping up the door slightly.

I’m a little hesitant when Dewalt says the grass spews out in the rear, for two reasons. First, do you want to be walking though the grass clippings? Second, I worry about other things shooting out the rear. My Toro mower has a flap that gets stuck in the up position and not only does grass come out the rear, but rocks, acorns, walnuts, and other projectiles shoot out at your legs at high speed.

They say that the rear door props up slightly though, so hopefully this mean the grass bounces off the rear door and shoots off to the side of the mower. But if so, I can see how this may cause a different problem, where wet grass might stick and block the discharge.

The rear grass discharge is something that I’m going to have to see in person before I can be comfortable with it.

Still, I am very curious about this mower for my own personal use. I have been seriously looking at an Ego mower, and I’ve been putting off buying one for a while. I’m looking forward to see how this mower competes.