ToolGuyd > Hand Tools > Knives > New Dewalt All-Metal Utility Knife (DWHT10319)
If you buy something through our links, ToolGuyd might earn an affiliate commission.

A new utility knife just popped up at Home Depot’s website, and it has me a little puzzled.

Shown here is the Dewalt DWHT10319 all-metal utility knife. What’s so special about it? Dewalt says that this new model offers the blade security of a fixed knife with the convenience of a retractable knife. They say that it has 3 times the blade retention compared to their traditional utility knives.

Three times the blade retention, huh? That’s something I would like to see added to a Stanley FatMax folding utility knife that slipped once during use. The blade got stuck into the material I was cutting and pulled right out of the knife. 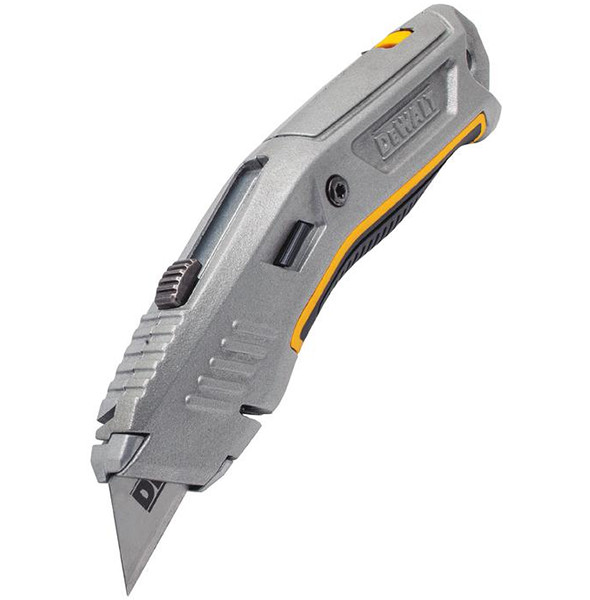 It looks to have a tool-free blade change mechanism.

Dewalt says that their new all-metal (I guess all-metal except for the grip material) is made in the USA with global materials.

The new Dewalt utility knife isn’t quite yet available for purchase, as of the time of this posting, but I expect for it to be in stock soon.

Did they really have to call this as an “all-metal” knife? Even the most basic utility knives are often all-metal, although I think I once saw a super-cheapened Stanley knife made from plastic.

The Stanley 99, less than $5 via Amazon (add-on), a hi-viz version with different handle contours, less than $6 via Amazon, and many other utility knives from Stanley and other popular brands, are also all-metal.

The curved ergonomics and simpler-looking blade change mechanism seems to justify the price, in my opinion.

From what I can tell, this looks to be a less-frills version of another new Dewalt utility knife that I examined at Dewalt’s 2016 new tool media event.

I discussed this knife in our 5 Hot Tools from the Dewalt Media Event post.

I’m not sure I’m enticed enough to stay on top of the release of this new all-metal knife, as I’m trying to do for the other model, but I’ll pause to give it strong consideration if I run into a display at Home Depot. 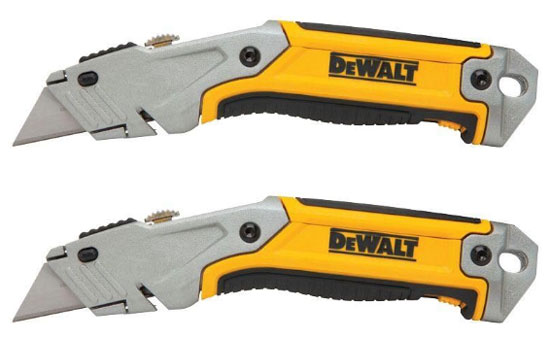 Hmm… maybe this model is meant to replace the standard Dewalt retractable knife that has in the past appeared in special promo 2-packs? I have at least 2 of these knives floating around, and while they’re great, I tend to favor more compact non-folding utility knives, and folding utility knives like Milwaukee’s FastBack knives.

I like that Stanley and Dewalt offer so many utility knife styles, and the new acquisition of Irwin and Lenox will add even more models to the ranks. I just wish that it was easier to find specific knife models and replacement blades in stores. No store carries everything, meaning I sometimes have to hunt down favored models.