Dewalt has officially announced their new 20V Max POWER DETECT cordless power tools, which feature tech that allows them to deliver a power boost when paired with an 8.0Ah battery.

The Power Detect tech will be featured “exclusively on four new 20V Max XR brushless tools,” three of which we posted about earlier:

Who are Dewalt’s new Power Detect-featuring cordless power tools aimed at? Dewalt says they are:

Dewalt also says that the new cordless tools feature “upgraded motors and components compared to their predecessors and durable housings,” although they don’t specify what types of components have been upgraded in any of the new tools.

Power Detect is described as being able to perform battery pack identification, and performance upgrades are provided for when the tools are paired with an 8.0Ah battery (DCB208). 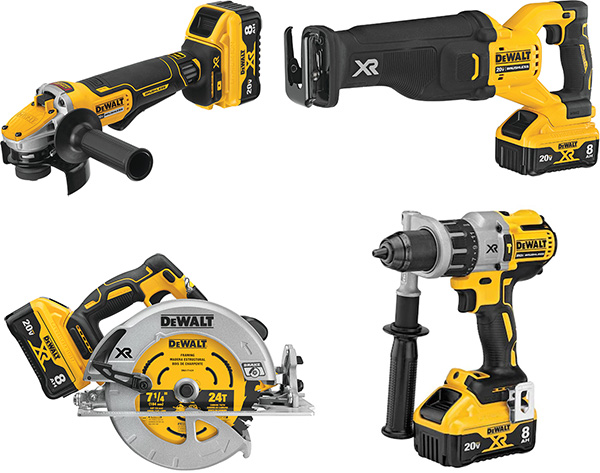 The marketing language, where these new tools are being compared to predecessor models, suggests that these tools might be replacing existing offerings, but this has not yet been confirmed with Dewalt. We have not seen any indication that there will be bare tool offerings, and the kits are all bundled with a single 8.0Ah battery. Because of this, I don’t expect for these Power Detect models to replace (or at least not fully replace) existing SKUs of predecessor models.

Additionally, with Dewalt Power Detect tools being aimed at commercial contractor applications, perhaps current versions of the tools will continue to be offered for a broader audience of end users.

Dewalt says that the tools are available now where Dewalt products are sold. It appears that Lowe’s was a launching partner, as they were the only retailer to list or sell these 20V Max Power Detect cordless power tools prior to this initial product announcement.

However, I’m having trouble locating any online retailers that list the current tools, aside from Lowe’s. We’ll check back later in the month, in case it’s taking them time to catch up with online listings or warehouse inventory.