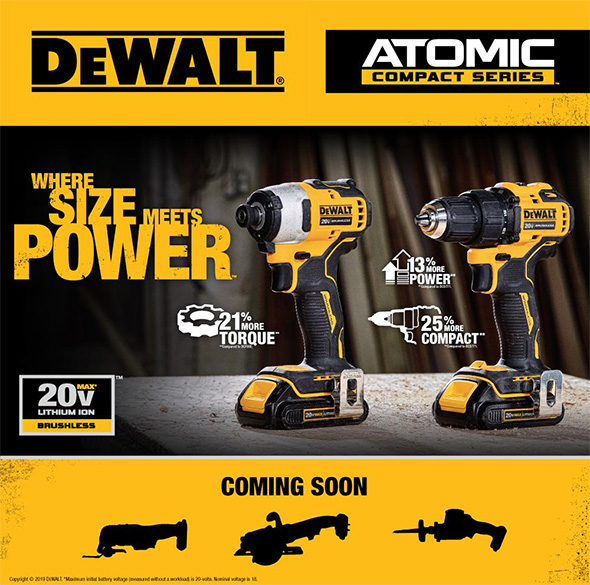 Dewalt is coming out with a new line of 20V Max compact brushless cordless power tools. The new Dewalt ATOMIC Compact Series is launching with a new drill/driver and impact driver. In a “coming soon,” teaser, it looks like a new oscillating multi-tool, circular saw, and reciprocating saw are on the roadmap.

The new Dewalt Atomic cordless power tools has the tagline where size meets power, emphasizing that the drill/driver has 13% more power and is 25% more compact, and the impact driver delivers 21% more torque. 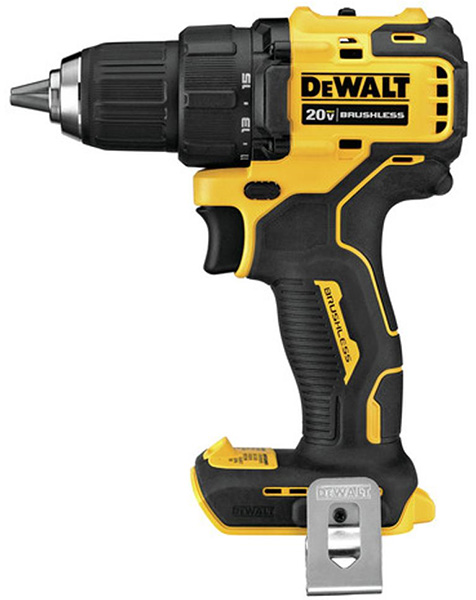 The new Dewalt DCD708 bears resemblances to the DCD777 brushless drill/driver that came out 2-1/2 years ago, and is similarly spec’ed at 340 UWO.

Regarding the specs, there are some disagreements on the product listings (I found one so far), and so they might be subject to change or correction.

The kit is bundled with a charger, carrying case, and (2) 1.3Ah Li-ion batteries. 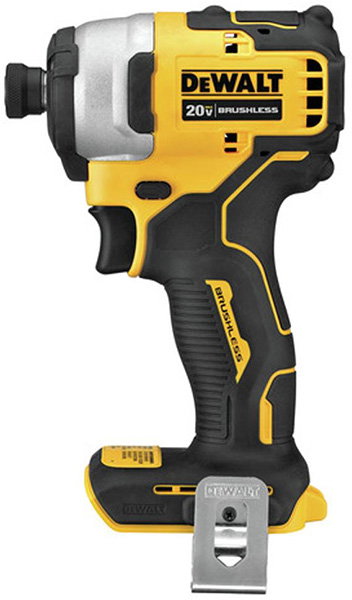 The new DCF809 brushless impact driver has improved and highly competitive specs, but it does lack the multiple speed and torque settings found on more premium tools. 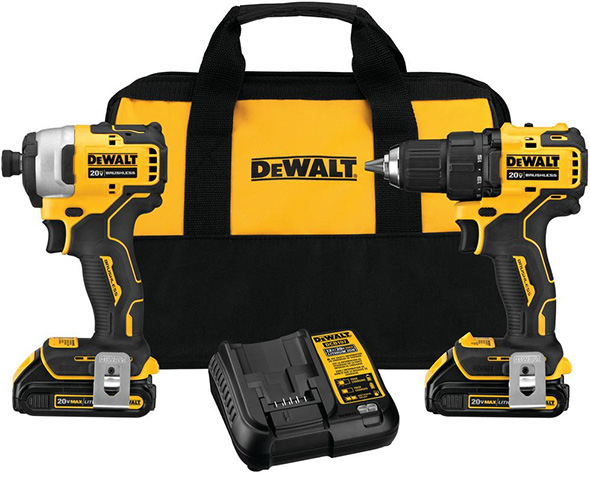 There will also be a 2-tool combo kit, featuring the Dewalt DCD708 drill, DCF809 impact driver, a charger, carrying bag, and (2) 1.3Ah batteries.

Thank you to Adam for the heads-up!

The new Dewalt Atomic 20V Max cordless power tools will likely be all-brushless. At launch, the drill/driver and impact driver both are, and the “20V Max Lithium Ion Brushless” stamp on the marketing banner suggests that future releases will be as well.

Here are the red flags. First, the teeny tiny footnote about the new Atomic Compact Series drill, and how it’s 13% more powerful and 25% more compact, references the DCD771, a 2-generations ago “special buy” drill/driver with brushed motor. While the DCD771 is still on the market, the brushless DCD777 has for the most part replaced it. The DCD777 is more compact than the DCD771, and more powerful. Compared to the DCD777, the new DCD708 IS more compact, but not any more powerful. If Home Depot’s specs are accurate, its max speed is slightly slower.

That aspect took away from my excitement.

The new Dewalt DCD708 Atomic series drill does look compelling too, as an upgrade to their current entry-level brushless drill/driver, DCD777. Compared to their more premium brushless drills, I don’t think an Atomic vs. XR comparison would be level and fair.

The pricing seems… off, for lack of a better way of putting it. The Dewalt Atomic 20V Max 2-tool cordless brushless drill and impact driver is priced at $229. With… 1.3Ah batteries? Dewalt’s entry-level brushless drill and impact driver combo kit is currently $199 at Amazon (you have to “clip” a coupon to get to that price), but typically drops to $149 during promos and holiday shopping seasons.

The bare tool prices are higher than for the street pricing of Dewalt’s premium and compact brushless offerings, which is puzzling, Granted, these new Atomic series tools are a little more compact – 0.2″ for the impact driver compared to the DCF887, and 0.6″ for the drill compared to the DCD791, and a little lighter, but the DCD791 and DCF887 are more powerful, faster, and better featured. The full authorized dealer price on the DCD791B looks to be $119 at the moment, and the DCF887B is $129.

Here’s the main point. I would say that, after looking at the initial selling points and specs list, I’m not very excited about the new Dewalt Atomic Series cordless drill or impact driver. I’m not turned off by them either. They look reasonably spec’ed, and improvements on their length and weight, and power for the impact driver, are GREAT. Despite my trying to make sense of the new cordless power tool line, as written out and shared in the preceding paragraphs, and eye-roll at the continued use of 1.3Ah batteries, the new tools do bring good things to the market.

With Dewalt competitors, namely Milwaukee and Makita, having matched Dewalt’s $99 holiday season drill and impact driver kit offerings, this is Dewalt bumping things up a notch.

The bigger news here is that Dewalt has given a name to this series of tools, and that they’re expanding it with new cordless cutting tools which are presumed to feature brushless motors.

It will be some time before we learn more about those new Dewalt Atomic “Coming Soon” cordless power tools. Will they, like the new drill and impact, be entry-level tools? Will they be main-line 20V Max cordless power tools and marketed to professionals as being compact alternatives to full-sized tools? Or will they be more prominently featured in “special buy” kits and combo kits, like the DCD771 drill that the new version is compared to in the Dewalt Atomic series marketing?

A 4- or 5-tool combo kit featuring Dewalt Atomic 20V Max cordless power tools might be a good sell towards DIYers or budget-conscious pros who might not need full-sized (and full-priced) pro-grade offerings, or pros who could benefit from using smaller and more compact tools.

One other question comes to mind. Will we see similar developments in the Craftsman 20V Max cordless power tool lineup?