ToolGuyd > Hand Tools > Clamps > New Dewalt Bench Vises – and They’re Not Bright Yellow!
If you buy something through our links, ToolGuyd might earn an affiliate commission.

Evan caught sight of a new Dewalt bench vise and asked if we know more about them. (Thanks for the tip!)

There’s not a lot of information out there on these new Dewalt vises, but perhaps enough for a quick discussion.

The new Dewalt 5″ vise, shown above, model DXCMWSV5, has a clamping force of 4,000 lbs, a 210° swivel base, pipe jaws, an anvil work surface, and replaceable grooved jaws. 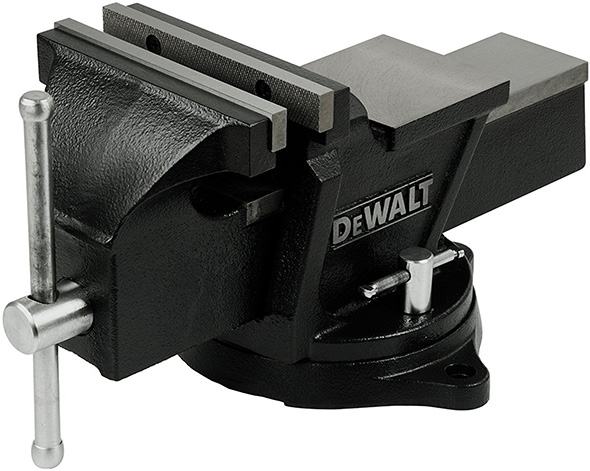 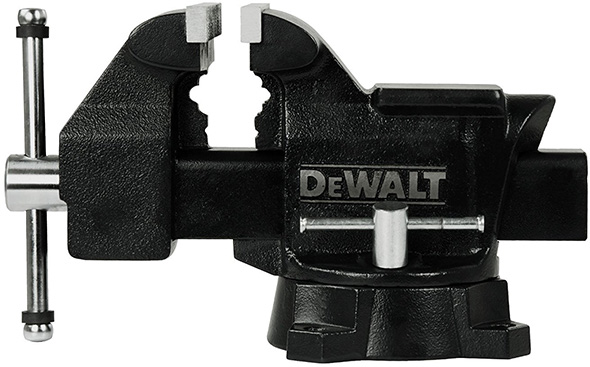 As mentioned, the 5″ vise has pipe jaws. 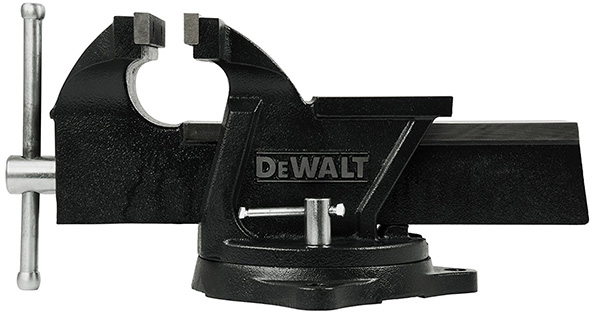 The 6″ vise seems to have much greater clamping capacity. But why does it have a much smaller swivel range?

They’re not bright yellow! Instead, both vises have a more discrete black finish.

So… Dewalt is making bench vises now. While initially tempted to wonder aloud what they’re doing in this market, I then thought about how limited the options are, in the mid-price range category.

Who else makes vises in this price range? Yost, Wilton, and Irwin come to mind, all offering imported vises. Ah – Irwin! You know, that other company that Stanley Black & Decker recently acquired.

With a closer look, these vises do look much like Irwin’s heavy duty workshop vises, available on Amazon, and I’m sure elsewhere (I didn’t check).

Okay, so let’s say these are adapted from Irwin bench vises. Does anyone here have any experience with Irwin bench vises? But can we even draw anything from that, though? Looking at product photos, there are strong resemblances, but enough differences to suggest new castings. They might not even made at the same factory, although I would guess that they probably are. Wouldn’t Dewalt want to take advantage of existing Irwin know-how or OEM arrangements?

Side note: This is where things often get complicated. How are users supposed to treat products like this? Should one be hesitant about being an early adopter? Or are the designs more or less tried and true despite being new to the brand? Milwaukee’s new ratcheting wrenches, for example, seem to be produced by a 3rd party OEM.

I’ve been disappointed with Wilton vise quality in the past. But boy is my Craftsman Professional bench vise a gem- too bad they discontinued it. My Craftsman Pro vise, with 60,000 PSI cast iron construction, 360° swivel range, and 4-1/2″ jaws, weighs around 40 pounds, maybe a little more.

While I have no doubt that these Dewalt heavy duty vises are heavier duty than the many entry-price point vises out there, it’s not at the top of the food chain.

As alternative to these Dewalt vises, I would also look at Yost, and probably more favorably too. Their 5.5″ utility vise, with multi-functional jaws, is $90 at Amazon. It has a 360° swivel range and weighs 29 pounds.

Overall, these look to be competitive new entries by Dewalt, but it’s unclear what advantages they have over competing models (such as by Yost), or existing Irwin models.

What do you think – if you were shopping for a new bench vise, would these hit your shortlist?