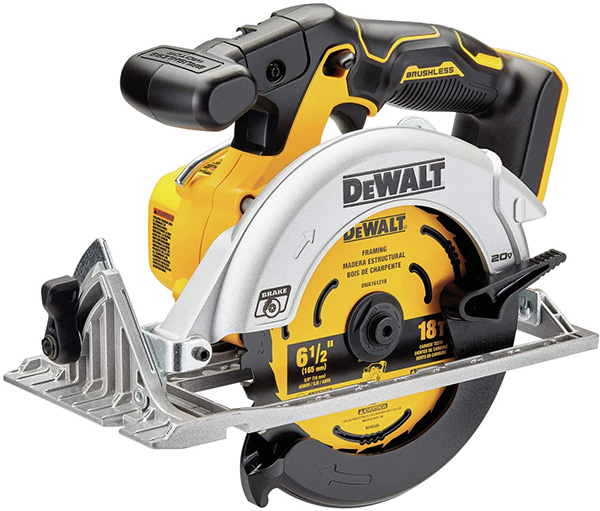 And, apparently there is a lot of excitement surrounding it. Who would have though that, given how many powerful 7-1/4″ circular saws that users could choose from these days?

Well, I can see the appeal. With a 6-1/2″ cordless circular saw, there’s less blade for the motor to turn, and so it should in theory draw less power, stretching out battery runtime. 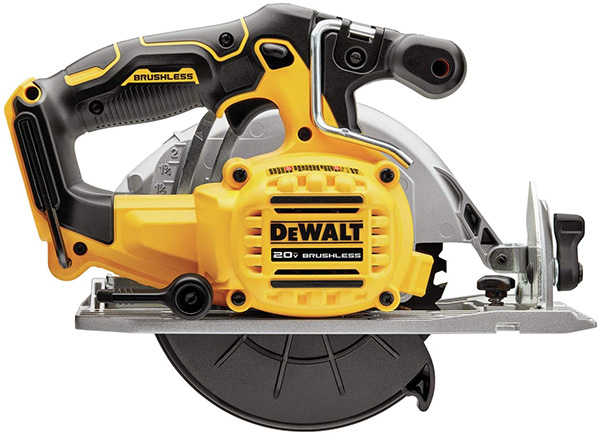 Looking at the side of the new Dewalt DCS565B circular saw, what do you see? 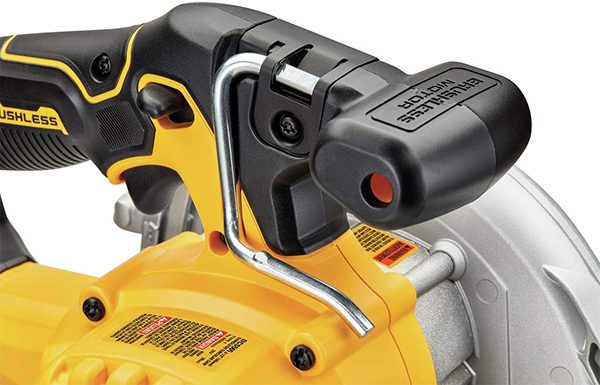 I see a folding rafter hook, staring at me. 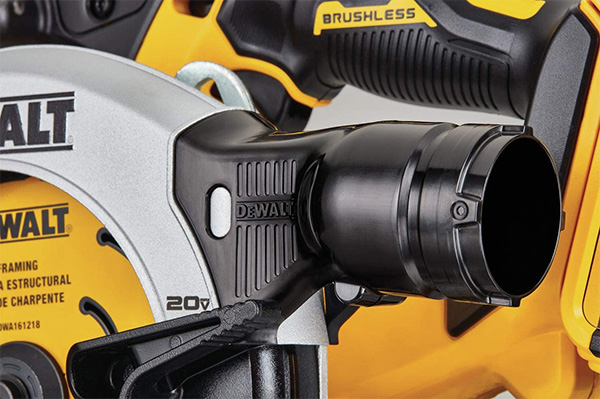 It also looks like the new Dewalt cordless circular saw will come with an optional dust chute, for connecting to dust extractors or at least better controlling sawdust ejection even if just by a little bit. 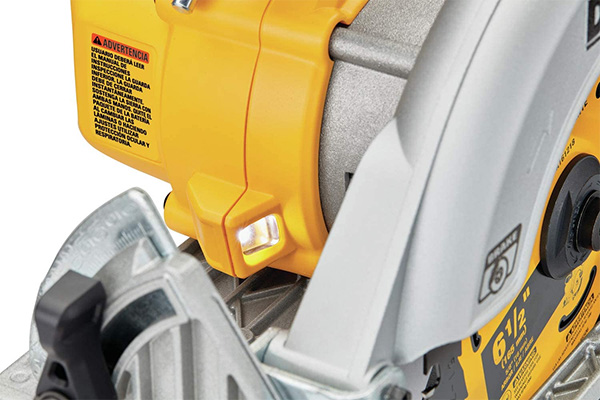 I also spy an LED worklight, whose purpose is to better illuminate your cut line. 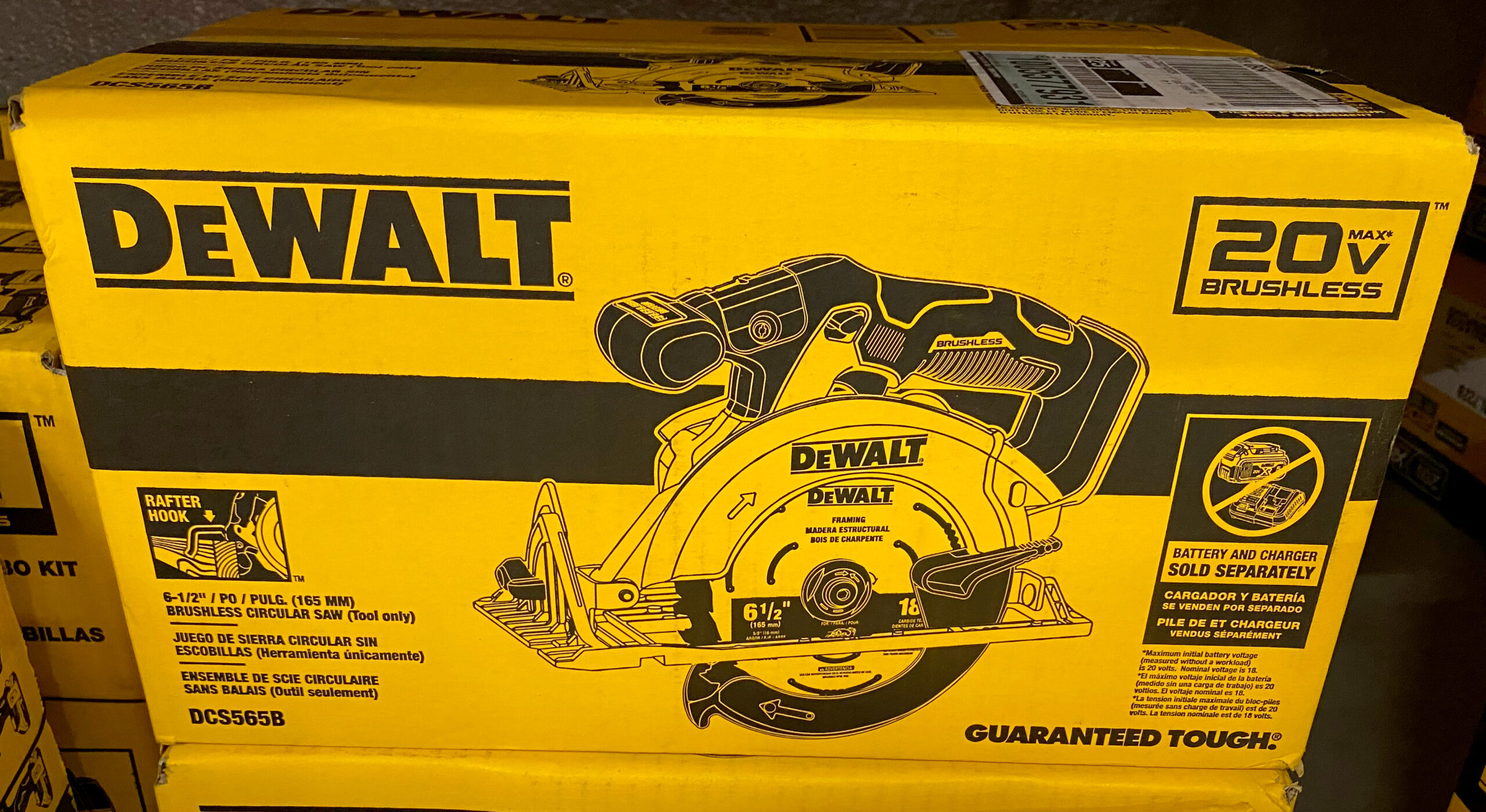 In case you didn’t think it was real, I spotted a couple of them at the local Home Depot. At the time of this posting, it is not listed on their website.

Oh – and the left-facing blade is also going to appeal to many users’ preferences.

Price: $169 for the bare tool
COO: Mexico (according to box label)

Wow, a lot has changed since then. Now, just 5 years later, and there have been so many advancements. There has been an almost absurd number of new brushless circular saws that have launched since then.

The new saw doesn’t look all that different from the original brushed motor model.

There are definitely some small changes and optimizations, as one would expect from many years of market research and further tool developments, and Dewalt made sure to add a rafter hook.

Although the product listings I found don’t explicitly say so, it looks to me that this saw also has the magnesium shoe that I favored on the older brushed motor model.

I found an online listing for a Dewalt Atomic 20V Max cordless power tool bundle that features this saw. That listing has since been removed, but they used the image of the older saw as a placeholder.

Would the new DCS565B cordless circular saw be an Atomic-series model with compact size, and compact size often being tied to power or performance compromises? It doesn’t look like that’s the case. This saw features slightly lower max motor speeds than the brushed model, but by a seemingly negligible amount.

From what I can tell, Dewalt put all the bells and whistles they could into this new 6-1/2″ cordless circular saw. This is something that brands typically do for their 7-1/4″ saws, but when’s the last time I brand refreshed their 6-1/2″ saw?

Larger and more powerful saws deliver greater performance, but it’s very good to have a modernized 6-1/2″ model, especially for users who want a more compact saw with a left-facing blade.

There’s been mounting excitement surrounding this quiet release, and I can see why. *thumbs up* Dewalt – this seems like a “we listened to our users” kind of tool.