ToolGuyd > Power Tools > Cordless > New Dewalt Brushless Impact Driver
If you buy something through our links, ToolGuyd might earn an affiliate commission. 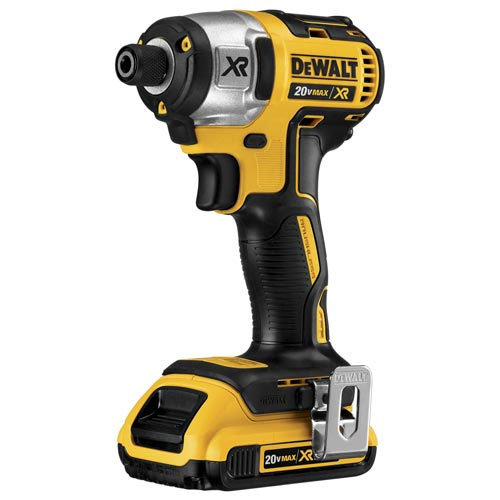 Dewalt is coming out with a new 20V Max XR brushless cordless impact driver, model DCF886, in addition to the new brushless hammer drill and drill driver we previously discussed.

As someone who found the DCF895’s bit holder to be somewhat harder to use than the one-touch bit holders found on Dewalt’s brushed motor impacts, I welcome the new design.

It is important to note that the DCF886 is NOT an upgrade to the DCF895, as it lacks several key features. It instead looks to be a direct upgrade to the similarly designed DCF885, Dewalt’s original 20V Max brushed motor impact driver.

The new impact driver has been given Dewalt’s “XR” branding, which has also been applied to their other recent brushless drills, as well as repackaged cordless tool kits that include either of the new high capacity batteries.

The DCF886 tops out at 1500 in-lbs, which is respectably high and the same as for Dewalt’s other brushless model. This is about average for an 18V/20V Max impact driver, with the DCF886 matching the power of Makita’s leading brushless model. Milwaukee’s M18 Fuel impact driver is slightly more powerful, with a 1600 in-lbs rating.

The new model does not feature the electronic and speed adjustment found on the DCF895 or other brands’ leading impact driver models. This is a disappointment, but it makes it clear where the DCF886 stands in Dewalt’s lineup.

There will be two new combo kits bundling this impact with the new brushless hammer drill (DCK286D2) and drill driver (DCK281D2). Users that want Dewalt’s premium model will have to buy the individual tools or kits separately.

While the new model doesn’t quite match up to Dewalt’s “premium” brushless impact driver, that doesn’t mean it’s not a sufficiently capable model. What I expect is for the DCF886 to slowly replace the similarly designed DCF885, which has a brushed motor. Between those two models the DCF886 likely delivers greater runtime (Dewalt claims “up to 57% more”), especially when paired with one of the new higher capacity battery packs.

Within the Dewalt 20V Max family, the DCF885 is still a great impact driver, despite its only having a brushed motor; the DCF895 offers the most features, if you can adjust to the unconventional bit holder release design; and the new DCF886 falls in between the two, far closer to the DCF885 than the DCF895.

It seems to me that the DCF886 is going be the economical choice for those who want a brushless impact without all the bells and whistles.

Personally, I am quite fond of the bells and whistles that this impact driver lacks. After testing models with electronic torque and speed control settings, I don’t want to ever go back to using ones without such a feature.

If budget is a factor, the new DCF886 is a great option for users who already bought into Dewalt’s 20V Max platform and are looking for a no-frills brushless impact. Users who want the latest and greatest brushless design might be better served by Dewalt’s DCF895, Milwaukee’s M18 Fuel, or Makita’s LXDT06 impact drivers, but should be prepared to spend more for them.