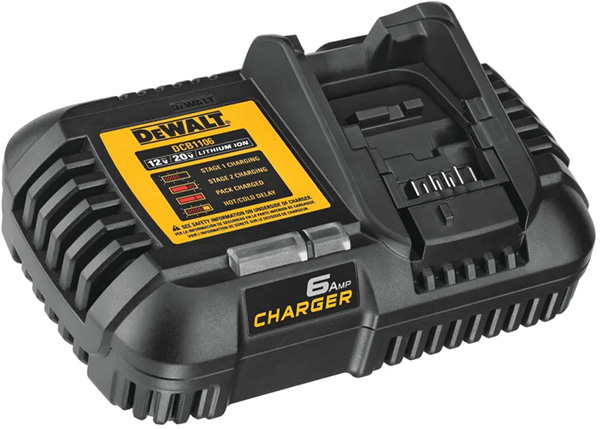 Thanks to a reader tip from Jason, we’re reminded that Dewalt is coming out with two new cordless power tool battery chargers.

The first new charger, DCB1106, shown above, can charge Dewalt 12V Max and 20V Max batteries with a 6-amp charging rate. It can of course handle FlexVolt batteries as well.

Dewalt describes the new charger as being versatile for a wide variety of charging needs, and says that it can charge a 5Ah battery to 80% capacity in under 45 minutes.

This new charger will be available as an accessory purchase but will also be included in certain Dewalt 20V Max cordless power tool kits. 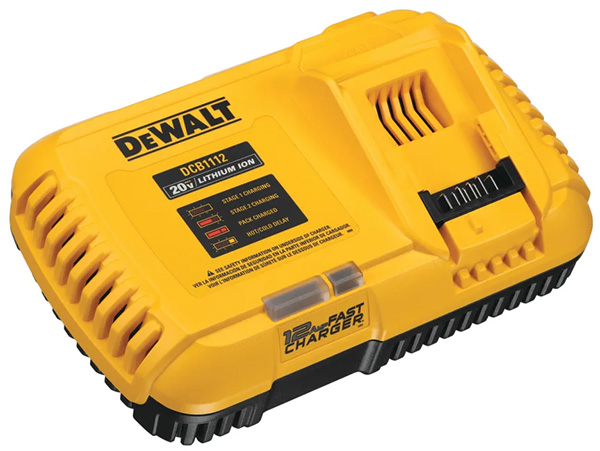 The second new charger is the DCB1112 Fast Charger, which is capable of charging Dewalt 20V Max and FlexVolt cordless power tool batteries with a 12-amp rate.

Thanks to the faster charging rate, Dewalt’s new Fast Charger can charge a FlexVolt 9Ah battery to 80% capacity in under 45 minutes.

As with the new 6A charger, this 12A Fast Charger also has 2-stage LED indicators, showing users when a battery has reached 80% and 100% charge capacity.

The 12A Fast Charger also features fast-assisted cooling, through-hole mounts, a latch for transporting the charger with a battery installed, and double insulation that meets UL compliance.

Dewalt says that the Fast Charger will initially be offered as an accessory only, but there are plans for future kit offerings.

Are there any 20V Max batteries that won’t benefit from these chargers’ higher charging rates?

Will the DCB1106 charger rapidly charge 12V Max batteries as well, or are they charged at a lower rate?

12V MAX batteries are limited to 4A max charging current; all 12V compatible chargers will limit current to this level for these batteries.

Will the DCB118 fast charger be discontinued and replaced by the DCB1112?

DCB118 will be discontinued as an accessory but will still be sold in kits.

Summary: There are only a few batteries that won’t benefit from the higher charging rates, 12V Max batteries are limited to a 4A charging rate, the new Fast Charger is replacing the previous model as an accessory/add-on option.

What can you say to convince me that these fast chargers won’t damage my batteries or shorten their lifetimes?

All Dewalt chargers are designed to properly identify Dewalt batteries and limit the current to charge them safely and reliably.

I’m on the fence about the 2-stage LED charge indication feature, but that seems like a “better to have it” kind of feature. Although rare, there are times when I need a cordless power tool battery charged fast and would be happy with a 75-80% charge capacity rather than taking it to 100%. Plus, according my understanding of optimal charging rates, final charging often takes longer than initial charging, due to increasing internal resistance and higher temperatures.

I think about it this way: You have an empty elevator that can fit 10 people. Those first couple of people can pile in quickly, but what happens once you’re at 8/10 capacity? Those last 2 people are going to have to push in a little in order to fill the elevator to top capacity. And if it’s a hot summer day where everyone is a little hot and sweaty, it’ll take a little longer. Sure you can still fit those last 2 people, but things are calmer and safer if they find their places on the elevator a little more slowly than those first 8 people did.

Personally, I am inclined to believe that cordless power tool brands have done sufficient testing to know the limits of their battery packs. With faster charging rates, controlling the heat is probably the most important consideration. Charge a battery too fast and it heats up, potentially causing damage over time – at the least. This is probably why the 12A charger has active fan cooling, and why both chargers potentially have different charging rates for the first 80% and last 20% of charge capacity.

Whether you’re eager for the faster charging rates or not, it’s good to have choices.