ToolGuyd > Hand Tools > Layout & Measuring > Here’s Why Dewalt, Craftsman, Stanley Now Describe Tape Measure Extension with “Reach”
If you buy something through our links, ToolGuyd might earn an affiliate commission.

Last week we posted about how Dewalt, Craftsman, and Stanley brands were now advertising their tape measures in regards to “reach” instead of “standout” in stores.

I reached out to our contacts at Stanley Black & Decker, hoping to learn more about what I was seeing, and to see if this was a company-wide initiative or if it only applied to the promo displays I had checked out.

First, this is a new initiative and yes it will apply to all Stanley Black & Decker brands and tape measures. We will see changes coming to all of their brands over the next year, starting with Stanley. 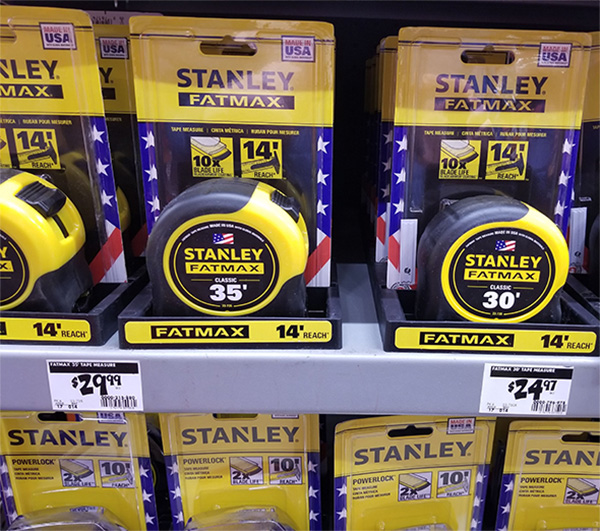 I visited a local Home Depot store to see if there were any changes to their regular tape measure displays, and found that the changeover has already occurred.

The Stanley tape measures were advertising their “reach.” 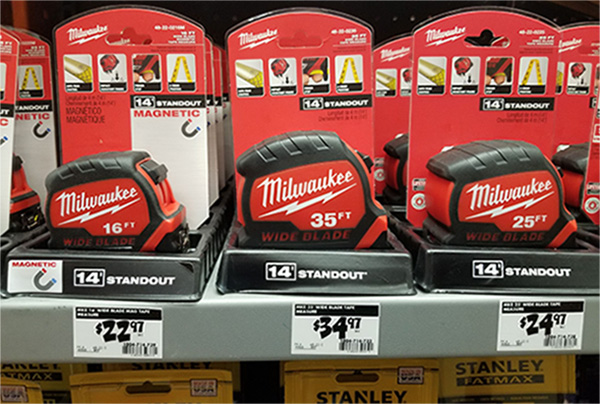 On the next shelf up, Milwaukee tape measures were still advertising their “standout.”

Let’s take a step back for a moment and talk about tape measure blade standout. What’s standout?

Standout is the maximum extension of a blade before it collapses under its own weight. Or, more formally, standout is a measure of a tape’s capacity for unsupported extension without breaking.

Stanley coined the term around 20 years ago, something I was not aware of. Competitors have adopted the term since then.

Stanley Black & Decker brings up a good point, in that there is no independent standard for this claim, leading to significant variation in claims amongst tape brands.

How clear is “standout” for end-users? Stanley Black & Decker shared some information about their research efforts:

We conducted considerable research on the terminology and after countless hours on the jobsite, speaking with nearly 1,000 professionals in the past year, we’ve found that users do not relate to the standout terminology – they relate to and understand reach.

What they found was that:

1) 70% of users could not recall the term standout as the term for tape extension unaided.

If more than 2/3 of users could not accurately interpret a marketing claim, I would agree that it could stand to be updated.

As an aside, I wonder if more than 2/3 of cordless power tool users understand the difference between 18V and 20V Max…

2) What users care about is how far the tape extends from where they are working – including their ability to manually extend the tape.

That does make sense. How many users will really extend a tape at or anywhere near its maximum standout without supporting the blade with another hand?

Research dating back to 1999 indicates high relatability to reach.

I can see how standout might be a more technical spec, and reach a more user-relatable one.

What Will This Mean?

Right now, it’s going to make for some confusing spec comparisons. Will users notice all of a sudden that Stanley and Dewalt tapes are advertised with “reach” specs instead of “standout?” How many users took note of standout specs before?

Competitively, well, if I were a product manager at a competing tape measure brand, I’d be trying to figure out my brand’s response. As shown above, you have Milwaukee tape measures with 14′ standout specs close to Stanley tape measures with 14′ reach specs. The average consumer is not going to be aware of the distinction between standout and reach, or at least that’s my opinion.

Five years from now, I think that other tape measure brands will have adopted “reach” terminology as well. I can’t see them not doing so, otherwise there’s a huge disadvantage in terms of customer perceptions, or at least when shoppers compare tape measure specs across brands.

Stanley Black & Decker’s shift from standout to reach product claims has been very quiet, for lack of a better word. But, Stanley was first to use “standout” to describe blade extension performance, and so it seems appropriate for them to be the first to want to change it.

From what they described in our conversation, REACH is what users relate to, much more so than standout. So, with this shift, aren’t they just shifting their marketing language closer to how users might already be interpreting standout?

In the comments to my previous post, it’s clear that a lot of people don’t even look to standout as a comparative measure, they care more about real-world performance. Also, a lot of people are loyal to specific tape measure brands, and might compare specs across just that brand rather than looking towards others.

We now know why Stanley Black & Decker is changing the terminology they use to describe tape measure blade extension. It will be interesting to see how tape measure competitors respond to or adapt to this shift.