ToolGuyd > Editorial > Dewalt, Craftsman, Stanley vs. Milwaukee, Ryobi, Empire: A Look at Stanley Black & Decker and TTI Financials
If you buy something through our links, ToolGuyd might earn an affiliate commission.

Stanley Black & Decker is the corporate owner of Dewalt, Craftsman, Lista, Porter Cable, Irwin, and several other tool brands. They also have partial shares in other businesses, such as MTD.

Read More: Tool Brands: Who Owns What? A Guide to Corporate Affiliations

Note: Stanley Black & Decker and TTI do not seem to calculate their segment profits in the same manner, and as such these figures should not be directly compared in the same ways that overall revenue, segment revenue, and net earnings can be. 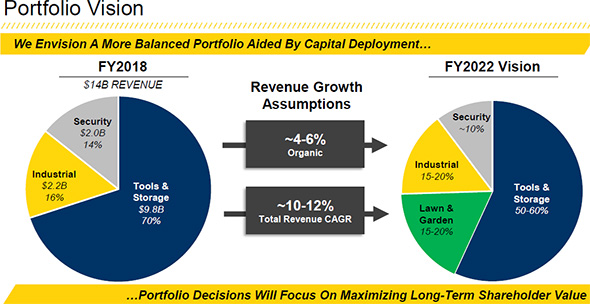 Stanley Black & Decker’s short-term plans involve working towards a more balanced portfolio aided by capital deployment, which would also see the addition of a distinct lawn & garden category in their revenue pie chart.

Recent business news remarked that Stanley Black & Decker is entering the lawn and garden product market for the first time, but that is incorrect, as they have previously marketed outdoor power tools under Black & Decker and Dewalt brands before purchasing the Craftsman brand or a partial share in MTD.

Stanley Black & Decker has a 20% stake in MTD Products and has the option to purchase remaining 80% beginning in 2021.

They also expect that the Craftsman brand will contribute ~$1B of revenue growth by 2021. 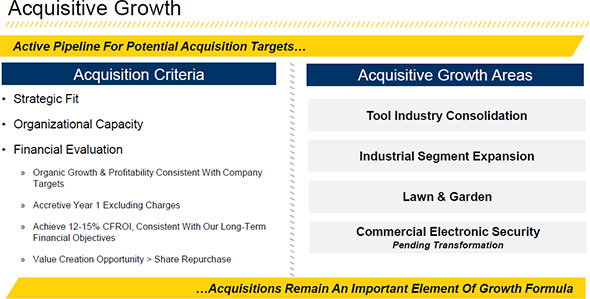 Stanley Black & Decker has also said, in their recent Investor Presentation, that they are continually considering acquisitive growth opportunities. 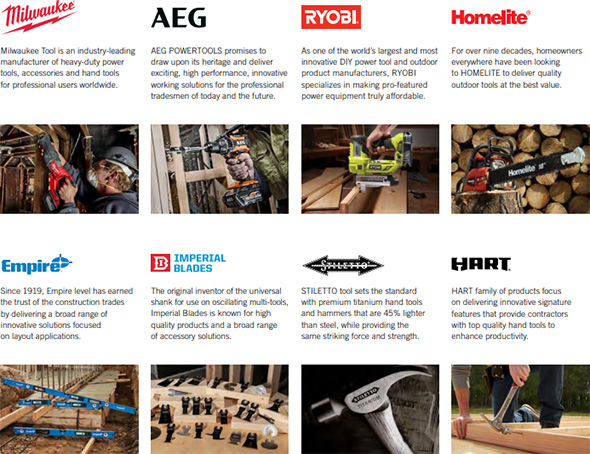 Compared to 2017, TTI earned 17% more revenue and 16.9% more profit in their tools and equipment segment.

TTI has also said that their Milwaukee Tool business has grown 28.2% worldwide over the previous period (2018 vs. 2017). We don’t know how much revenue Milwaukee Tool earns in relation to the total sum, but we do know that the popular professional power and hand tool brand is growing year over year.

Reviewing 2018 performance for both brands, I am extremely surprised at how far both companies have come, but especially how much TTI has grown.

I believe it is clear that The Home Depot is TTI’s largest customer, but objections to this opinion are of course welcome. In the the power equipment and tools segments, Home Depot distributes Milwaukee tools, Ryobi, Ridgid, Empire, and Hart. It is worth reminding the reader that Ryobi and Ridgid (power tools and equipment) are tool brands that are exclusively sold at Home Depot.

In the case of Lenox and Irwin, we moved aggressively to capture the revenue synergies from these transactions. We are focused on leveraging these products within our global customer base and bringing new offerings to market, particularly in emerging markets.

They discuss their largest customer as well:

TTI does not provide a tools-segment-only revenue contribution of their largest customer.

While the revenue contribution from Lowe’s increased from 15% in 2016 to 16% in 2017 and 17% in 2018, I would have anticipated a greater difference, given the volume of Craftsman tools that Stanley Black & Decker shipped to Lowes during the 2018 winter holiday shopping season, but it is difficult to interpret and infer about these matters without more information.

It will definitely be interesting to see what 2019 has in store for both companies and their growing tool brands.